There are 84 chairs for the public in the Mission City Council chambers. On Monday night each was filled and at least 50 more persons stood along three walls of the chamber. Nearly everyone had shown up to ask the mayor and council to refuse any zoning variance request that would allow the Valley Baptist Retreat in Mission to be turned into a temporary holding facility for unaccompanied immigrant minors.

“We would object to any change, even placing a business or anything else there,” said Frank Unger, a resident of the 480-home Aladdin Villas subdivision that abuts the retreat on Stewart Road just south of Business 83. Unger, a retiree from Bloomington, Ill., who has lived in the subdivision permanently for 18-years, told the mayor and council he represented the 470 subdivision residents who had signed a petition against a immigrant center. A number he guessed represented about half the subdivision’s residents. 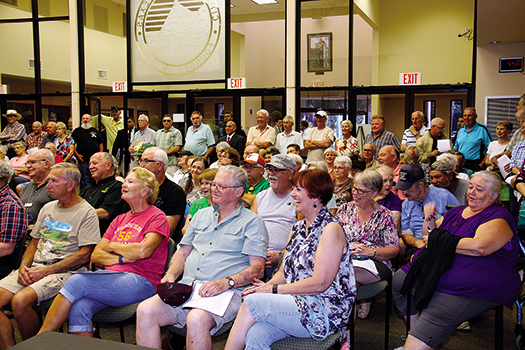 “Our fear is if you allow anything else other than what is already there it will devalue our property that we have worked so hard for,” Unger said, reading from the petition.
Next, Nancy Hazen, a resident of the Mission Bell RV Resort, located on the north side of Business 83 at Stewart Road, said she was submitting 223 petitions signed by resort residents.

“So I guess I don’t have to reread this,” she said, gesturing to the petition in her hand.

Some residents, like Aladdin Villas Home Owner’s Association President Ron Turany, said they turned out Monday first in response to rumors the federal government was seeking to place some form of immigrant holding facility at the retreat.&nbsp; Then after Baptist officials confirmed in Feb. 17 editions of the Progress Times and its sister papers they were in negotiations with the U.S. Office of Refugee &nbsp;&nbsp; &nbsp;

Resettlements (ORR) to turn the retreat into a temporary holding facility for unaccompanied immigrant minors.

“The panic I was having was all the rumors that were going around,” Turany said. Turany said he and his wife, Pat, are both missionaries who have operated a children’s home. He said opposition to any change in use at the retreat was over concerns it could negatively impact property values.

“So I don’t want anyone to say, ‘Hey, you’re a bigot.’ I’m talking about we don’t want change in our community. We bought here because of the surrounding community. We already knew what was inside [the retreat], just a bunch of old people.”

Brand said the lease agreement is contingent on the outcome of negotiations between the U. S. Office of Refugee Resettlements and the Harlingen-based Baptist Child and Family Services or BCFS. The BCFS already operates temporary housing facilities in Los Fresnos, Harlingen and San Benito, said Robert Cepeda, Director of Missions for the Rio Grande Valley Baptist Association and operator of the Valley Baptist Retreat. BCFS officials referred the Progress Times to the U.S. Department of Health and Human Services which oversees ORR. A department spokesperson said the agency could not comment “on pending funding matters.” &nbsp;

Brand said Wednesday there is nothing new to report on the negotiations but that publicity about the negotiations has not helped speed up a decision by the ORR.
Brand characterized rumors surrounding plans for the center as “ridiculous” and “out of control.”

Mission City Manager Martin Garza Jr. said following the council meeting the retreat would require a conditional use permit in order to operate a temporary immigrant holding facility. And he said that would first require a public hearing before the city’s Planning and Zoning Commission with a recommendation from the commission. It would then require a public hearing before the city council followed by council approval.

Salinas drew applause from attendees Monday when he said he agreed with the petitioners and that he would not allow the retreat to become an immigrant holding facility.

“So don’t worry about it,” Salinas said. “And don’t forget to register to vote.”

However, polled after the hearing, not every councilmember agreed with Salinas.

Though both council members Ruben Plata and Norie G. Garza said they sided with the petitioners, Jessica Ortega-Ochoa said she would research the matter &nbsp;&nbsp; &nbsp;
further before making a decision. And citing assertions from Brand the center could generate about 300 new jobs, Dr. Armando O’Caña said he would first look at the economic impact such a facility might have on the local economy and the possibility it could keep tax rates down by generating tax revenues.

“I don’t like to predict my vote based on 250 people who come here,” O’Caña said.