The most obvious changes are that the stands on both sides of the field have been completely demolished and both press boxes are gone – the first step in replacing the approximately 9,000 seats with an equal number of new seats, including about 700 seats with back rests.

The major renovations taking place at what according to TexasBob.com’s Texas Football Stadium Database was the 7th best high school football stadium in the state of Texas last year, are all part of the $8 million project approved by the Mission Consolidated Independent School District’s Board of Trustees. The renovations are scheduled to be completed in time for next football season. 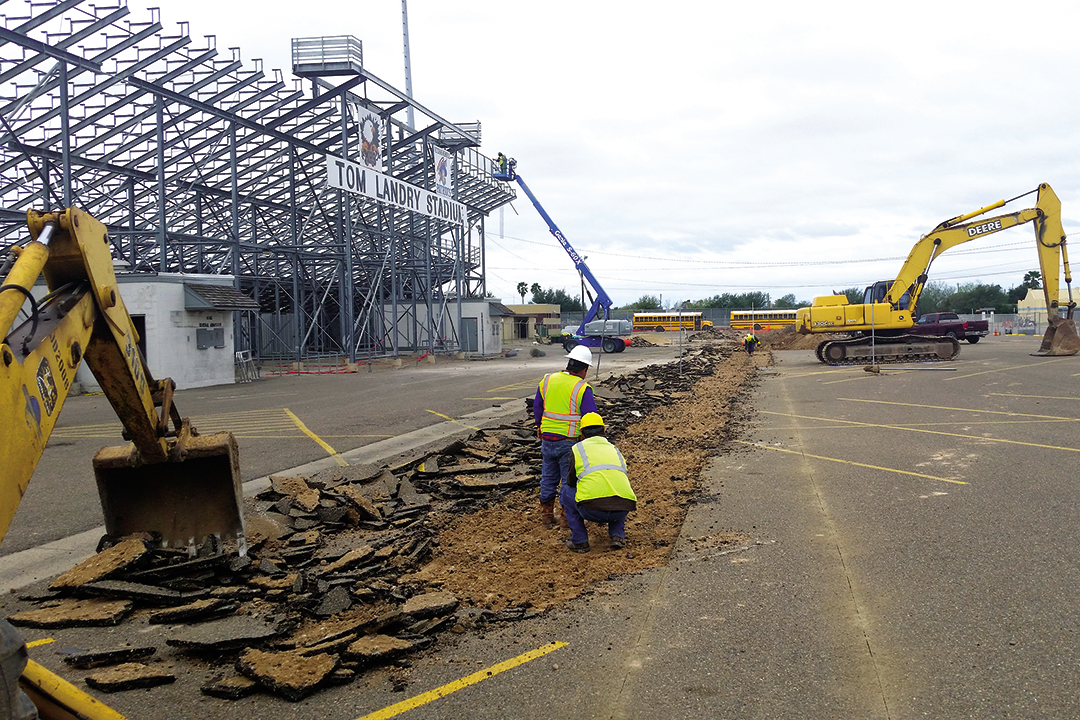 Work is underway on the $8 million renovation
of Tom Landry Football Stadium. Work crews are shown
demolishing the parking lot, while other workers disassemble the bleachers in this photo taken last month. Now the
bleachers, press boxes and parking lot have been completely demolished. MCISD Photo

As for what changes Mission Eagles and Mission Veterans Memorial Patriots fans will see the next time they walk into Tom Landry Stadium for a football game, Mission Eagles head football coach Koy Detmer said, “It’s going to be totally revamped, all the way from new parking lots, to a big grand entrance into the stadium with a statue honoring the great Tom Landry, to new and improved seating. Also, the press box is going to be a brand new, top of the line press box. When all is said and done and it’s finished, it’s going to be a really nice look for the stadium.”

According to Detmer, the scheduled completion date is August 21, 2017. And from what he’s being told, the renovations are running slightly ahead of schedule at this time.

“The weather’s been really good and the reports that I’m getting is that we’re a little bit ahead of schedule right now,” Detmer said. “It’s kind of crazy to see this stadium, where I once played and where I coached earlier this year; now there’s absolutely nothing where the stands once stood. They’ve been working away and hopefully they’ll finish on schedule. But we all know how different things can come up during construction projects and sometimes they go over a little bit.”

With the Patriots being scheduled to play the first football game in the newly revamped stadium when they host the Harlingen Cardinals on September 1, any delays in the construction could be problematic. Detmer is hoping too that the stadium be ready for the Battle of Conway, the annual matchup between the Eagles and the Patriots, scheduled to be played September 8.

As for what he would say to anybody that may question why so much money is being spent on new seating when the old seating has sufficed for all these years, Detmer said,

“From my understanding it is a safety issue and a matter of having the required handicapped access. The old seating was really outdated in terms of some of the safety standards and instead of doing patchwork adjustments, the district and the board decided that we might as well go ahead and get everything up to code and up to the required standards in a way that will last for decades to come.”

As for what is going to become of the old seating, Detmer explained that it will be used at other sports fields and stadiums in the district, including the football field at Veterans Memorial High School, to update and expand their current seating.

Soccer, Track & Field Affected
While Tom Landry Stadium is primarily a football stadium, it is also used for other sports including soccer and track and field. So how have the Mission High soccer teams and track and field athletes been affected by the construction?

“With the whole field and the track being off limits, we’ve had to make adjustments with scheduling of the soccer teams’ games and we’ve had to move to the practice field area with all the sports,” explained Detmer. “We’ve painted a track on the practice field, we’ve moved some of the high jump pits over there and the boys and girls soccer teams are both having to play all their games on the road, so we have had to make adjustments like that.”

“But the kids, coaches, our staff and everybody have handled it extremely well,” added Detmer. “In track, the kids are winning relays and doing great in their events at the different track meets that we go to and the boys soccer team was undefeated until they lost to Juarez-Lincoln Friday night. So they’re currently in second place in the district. The great thing is that we haven’t heard anybody complain one way or another. Instead, everybody has the attitude of instead of going out this door we’re going out the other door and put your cleats on and let’s go.”