In light of some average grades for the district from the state’s proposed new ratings system and some deficiencies found in the district’s special education program, Mission’s Consolidated Independent School District has taken another step toward creating a five-year strategic plan to address student achievement.

In February, district officials announced they had contracted with Studer Education, a Pensacola, Fla.-based company that provides teams of education consultants to help school districts improve their performance.

The action was taken in part because of the school district’s performance on the proposed A through F ratings system that will replace the current Texas Academic Performance Report or TAPR. In addition the district was told last June its programs for special education students needed intervention. 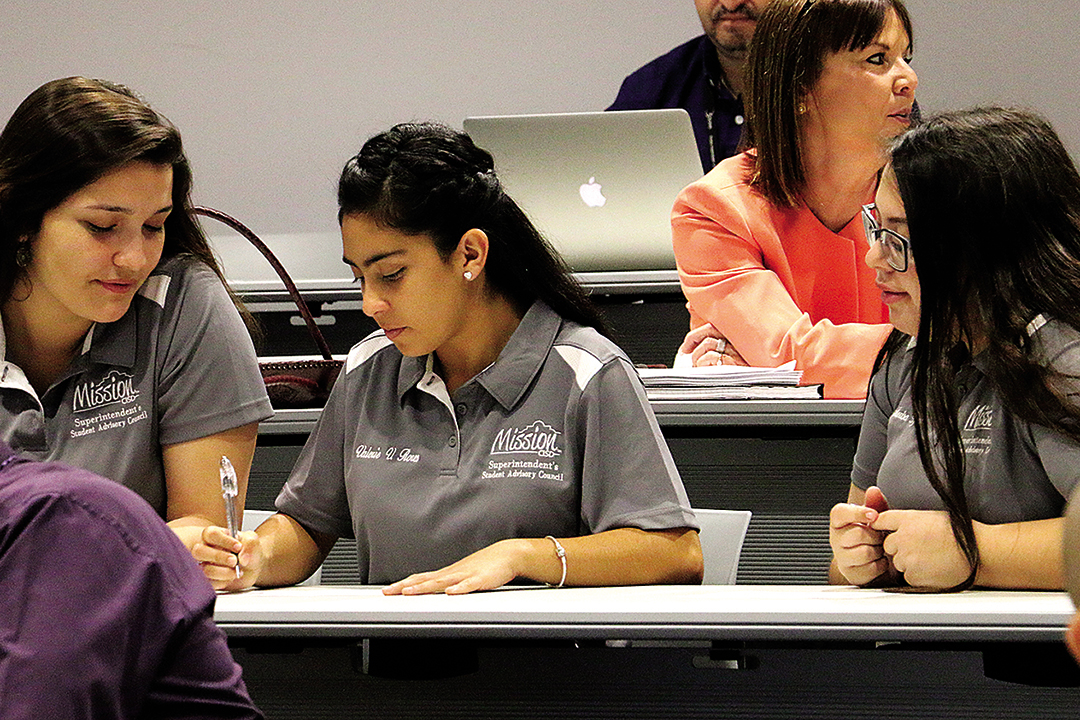 On Jan. 1 the Texas Education Agency released “mock” grades for school districts and campuses they would have received for four of five ratings categories had the state’s new A through F rating system been in place during the 2015-16 school year.

Under the current system, schools are graded as having met standard, didn’t meet standard or distinction. Had it been operating under the proposed grading system set to take effect at the beginning of the 2018 school year, Mission CISD would have received three Cs and a B.

And in June of last year the TEA informed the district it had received a “needs intervention” rating under its Performance-Based Monitoring Analysis System for the 2015-2016 school year for the district’s special education students.  The PBMAS provides an annual report on the performance of school districts in the areas of English as a second language, career and technical education, special education and certain programs under the No Child Left Behind Act, said Texas Education Association spokeswoman Lauren Callahan.

In a June 3, 2016 letter from C. Lizette Ridgeway, manager of Program Monitoring and Interventions for the Texas Education Agency, Mission CISD Superintendent Ricardo Lopez Jr. was notified the district had one year to submit a corrective action plan to address deficiencies in the district’s special education program.

On March 1, the Mission CISD District Educational Improvement Council held its first meeting with Dr. Melissa F. Matarazzo, of Studer Education, to begin the first step in developing a five-year strategic plan for the district.

Chriselda Valdez, deputy superintendent for curriculum, said the district has entered into a five-year contract with Studer to help improve the district’s academic performance. She said the contract will cost the district about $50,000 a year.

The District Educational Improvement Council is comprised of students, district employees at every level, business leaders, community leaders, and parents, among other “stakeholders,” per a recent district press release.

Matarazzo, herself a former middle school teacher and principal who holds a doctorate degree in education from Harvard University, met with council members at the Center for Education and Economic Development. Matarrazzo said prior to the meeting one of the first steps in creating a strategic plan is coming to an agreement on district priorities.

“What’s hard about strategic planning is everybody has priorities and what we’re looking for is where’s the consensus on the priorities for this community,” Matarrazzo said during a Feb. 28 Mission CISD Board of Trustees Curriculum Committee meeting. She used the analogy of arrows to make her point.

Following her presentation, Matarazzo was asked if the Texas Education Agency’s plan to replace its current TAPR grading system with the A through F grading system increases the challenge of formulating a strategic plan to improve student grades.

“What I would say is to look at the metric, not the way the state interprets it,” Matarazzo told the Progress Times. “In other words, if you have a metric — and it could change every year because that happens in other states, too — that says, ‘This is how we know a third grader can read at the third grade level.’ That’s where I would put your goal, not the ‘B’ or the ‘needs intervention.’ I would go with what is consistent over time and use that as your goal.”

“That’s why it’s important we take our delivery of instruction seriously,” Campos told the committee.

At that same meeting Campos presented her plan for improving programs for the 0.9 percent of special education students receiving classroom training in segregated or “self-contained” classrooms and a similar percentage who suffer from communication disabilities. Part of that plan is to break up the number of special education students into separate classrooms to focus on their individualized learning or behavioral disability.

“So currently what we have, ages three through five year olds, all the disabilities, multiple functioning, all together, all in one melting pot,” Campos said, referring to her proposal to change the district’s Preschool Program for Children with Disabilities. “So you see where we’re going from the big melting pot and now we’re separating them and making sure that we’re focusing so that number one, we have safety in our classrooms. And we have the right student-teacher ratio and the quality of instruction that each student needs to define their success.”

Though still in the preliminary stages, Campos told the Progress Times this week, via the district’s public information office, the plan calls for increasing the district’s current 25 special education teachers to 30 and the current 57 teacher’s aids to 62. She estimates the 10 additional positions would cost a minimum of $400,000. The district’s current special education budget is approximately $13.3 million comprised of federal, state and local funds. Campos told the curriculum committee in January she hopes the additional funds can come from already budgeted programs elsewhere in the district.

“I know Dr. Lopez had mentioned to me this doesn’t mean that we add more money to the budget,” Campos said, referring to the district’s superintendent.  “It means we take it from somewhere else. So sorry, guys,” Campos said turning to audience members, many of them school principals.

The plan will also require an, as yet, undetermined number of additional classrooms, something Campos is determining with facilities management.

In a recent district press release Lopez said the goal of the District Educational Improvement Council meeting with Matarazzo is to have a strategic plan approved by June. The date coincides with the one-year deadline the state gave for improving the district’s special education programs.

“Through this process we should have a clear definition of where we expect to be in five years and the general strategies we will use to get there,” Lopez stated in the press release.  “This tool is then used by everyone during annual planning and becomes the focus for moving the district forward to better serve our students and community.”