Success is no stranger on the baseball diamond at Veterans Memorial High School. 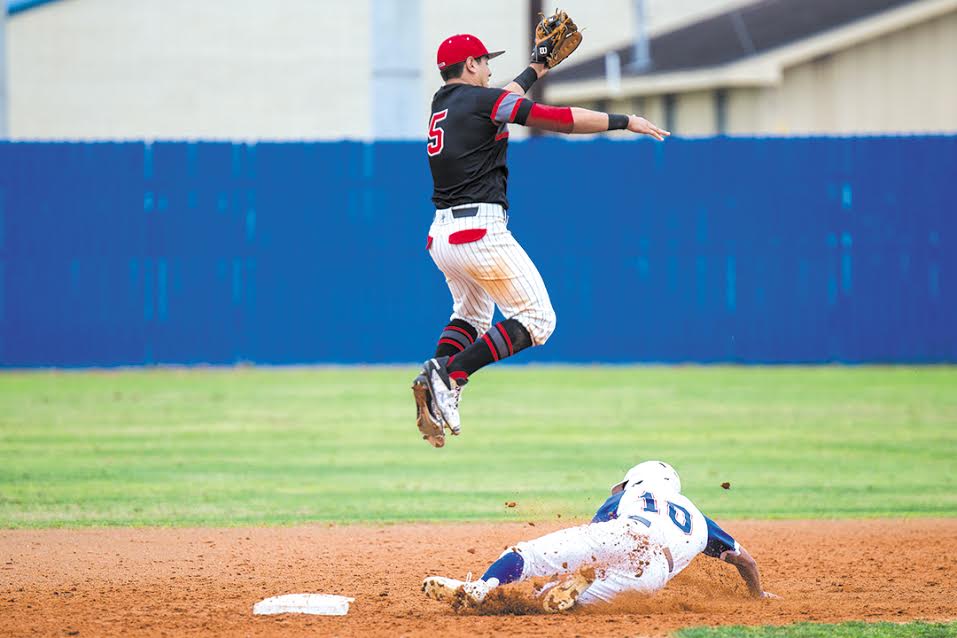 Head Coach Casey Smith is in his eighth year at Veterans Memorial. He expects his team filled with veteran experience to play hard every day to give them the best chance to win.

“What I expect from this group is to come out every day and play hard,” Smith said. “I don’t look beyond that as far as expectations. I feel if we do that every day then we give ourselves the chance to be good and that’s the key. Our goal is to take today and be the best today.”

The eighth returning starter, catcher Anthony Gonzalez, has been a spark for his team, both at bat and behind the plate. He is currently batting .457 with 21 hits, 15 RBIs and 10 runs scored. Gonzalez, a varsity member since his freshman year, said he has learned from playing alongside the seniors on the team.

“This group is amazing,” he said. “I’ve been here since my freshman year and I’ve learned a lot from these guys. Never quit, never back down, and always keep coming at them even if we have a bad inning.”

The Patriots stayed busy over Spring Break, picking up three big wins early in the week to remain unbeaten in District 31-5A.

Monday, the Patriots hosted the Pioneer Diamondbacks, rallying back from a 3-0 deficit after a slow start and two errors in the top of the first inning. In the bottom half, Gonzalez pulled his team within a run on the back of a double that brought in seniors Roman De Leon and Vela. Gonzalez finished the game with three hits and four RBIs in his four at-bats.

Vela, who started the game at pitcher, composed himself and proceeded to hold the Diamondbacks scoreless over the next five innings, racking up 12 strikeouts in the process. Senior Christian Ramos took over in the seventh inning to seal the 6-3 victory for the Patriots and his first save on the year. The win is the third of the season for Vela.

The Patriots followed that performance with a dominant 18-0 win Tuesday over the Cigarroa Toros. After a scoreless first inning, Veterans Memorial opened the floodgates, scoring seven runs in both the second and third inning. Vela, along with Galvan and junior Ricardo Llanas, had three RBIs apiece while Gonzalez and freshman Angel Nuñez each brought in two of their own.

Ramos, Nuñez and sophomore Alex Guajardo worked together for the five-inning shutout of the Cigarroa, with Ramos picking up his third win of the season.

Wednesday, the Patriots traveled to Laredo for a district matchup with the Nixon Mustangs. Their convincing 5-0 win was the third victory for the Patriots this week.

Vela, who was named First Team All-State last year for his play at first base as a junior, signed his letter of intent in November to play collegiately for UTRGV. He said he doesn’t think about accolades he’s earned, but is just taking his senior year one game at a time.

“I try not to think about it and just play,” he said. “We’re just trying to take it game by game and see what happens. Our ultimate goal is a district championship and we’ll see what happens after that.”

If the Patriots can keep up their play, they’re looking at bringing another district title back to Veterans Memorial High School and a strong postseason showing.

The Patriots’ next game is 7 p.m. Tuesday as they host the Rio Grande City Rattlers in a District 31-5A showdown at Veterans Memorial High School.