After a few moments in the waiting area, Jason Mangold was instructed to enter a gold painted, shipping container-like device. The business developer had traveled from Chicago to Mission but decided to make a visit to a new attraction at Mission’s Center for Education and Economic Development (CEED) Building.

After closing the curtains behind him. Mangold stood in front of an 8 by 10 foot video screen, and waited. 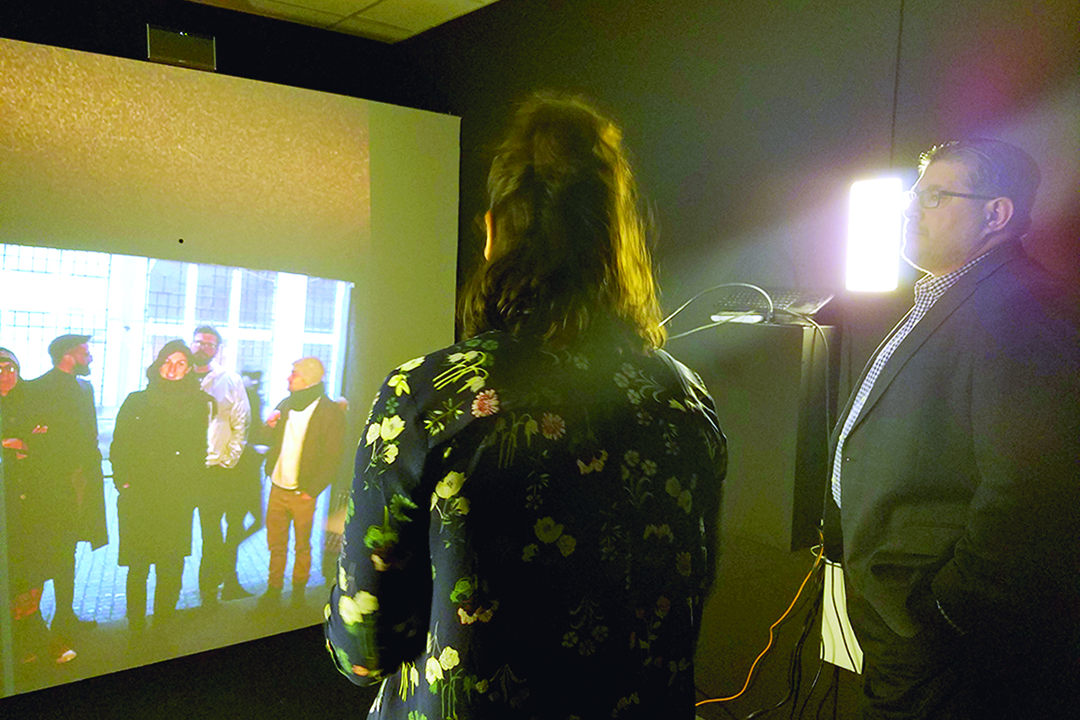 On a chilly evening 7,000 miles away, Omar Al Shafai walked from the Migration Hub Network in downtown Berlin, Germany to a similar shipping container in front of the migration center.

Al Shafai opened the doors of the container and turned on the camera near the 8 by 10 foot video screen, and waited.

Suddenly, through the pair of video screens linked across thousands of miles, Al Shafai and Mangold were staring at each other in the same room. Despite being six time zones away from each other, the two men were an arm length’s apart.

“This is so cool,” Mangold said.

Both men were using a video “Portal” developed by the company, Shared Studios, to see each other. Portal shipping containers are equipped with immersive audio and visual technology that mimics the experience of standing face-to-face with someone in a distant portal, the Shared Studio website says.

According to Mission Portal Curator Cristina Garza, several major cities around the world in countries such as Honduras, Iraq, Cuba, Afghanistan, Kenya and Myanmar have a Portal. However, Mission is the first city in the Valley to receive one.

During their conversation, Mangold and Al Shafai discussed their careers. Al Shafai told Mangold how, as a Syrian refugee, he arrived to Berlin in 2015 as one of 11 million people who fled the country as a result of an ongoing civil war. The European Union website said nearly five million Syrians have fled to neighboring countries and nearly one million Syrians have requested asylum in Europe with Germany receiving 300,000 applicants.

When Al Shafai arrived to Germany, he said he was shocked at how complicated the immigration process was.

“I was surprised by the long waits in line and when I first arrived, I waited two weeks for a paper called ‘Kostenuebernahme,’ a permission for staying in an apartment or hotel,” Al Shafai said. “When I signed any forms they were in German so we didn’t know what we were signing. None of the papers we received were translated for us and if we’re  facing an extra fee to get a translator.”

Because of his experience, Al Shafai learned coding and programming so he and a few friends could develop an app called Bureaucrazy to simplify the immigration process.

After the session, Garza remarked the Portal allows people to connect in ways that regular technology doesn’t.

“Everyone can have Skype, but not everyone will have access to a person with a story like Omar’s,” Garza said. “Even though we live in an era with an abundance of technology, nothing beats that connection of looking at someone in the eye, which the Portal facilitates. It brings back that human feeling that can sometime feel like technology has taken away.”

According to Garza, the Portal is set to be housed for one year at the CEED building and is open to the public. Due to time zone issues, Garza said she tries to schedule international Portal conferences in the morning while the rest of the day is made up with domestic Portal conferences.

Besides creating a network, Garza said she envisions the Mission Portal will expose residents to people around the world and vice versa.

“This area has been in the news for the last month following several visits from politicians such as House Minority Leader Nancy Pelosi and Speaker Paul Ryan so we want people to know us and understand what it’s like to live in this part of the country,” Garza said. “It’s not just about people getting to know us, it’s about people learning of parts of the world people may not know of or meeting people that are different to them and that’s super exciting to be a part of.”

To schedule a Portal conference, all visitors are urged to contact Garza at cristina@sharedstudios.com.