The late singer/song writer Harry Chapin famously wrote, “All My Life’s a Circle,” a song title that could have been written for former Democratic U.S. Rep. Eligio “Kika” de la Garza.

De la Garza, who died March 13 of kidney failure at 89, was eulogized in the church where he was baptized, received first communion and served as an altar boy before serving in the Korean War, representing South Texas in Austin, Texas in Washington and the U.S. around the world. Following a 75-minute service March 17 at Our Lady of Guadalupe Catholic Church in Mission, attended by about 600 people, he was laid to rest following a 21-gun salute at Valley Memorial Gardens Cemetery in McAllen, in the county in which he was raised and the city in which he died. 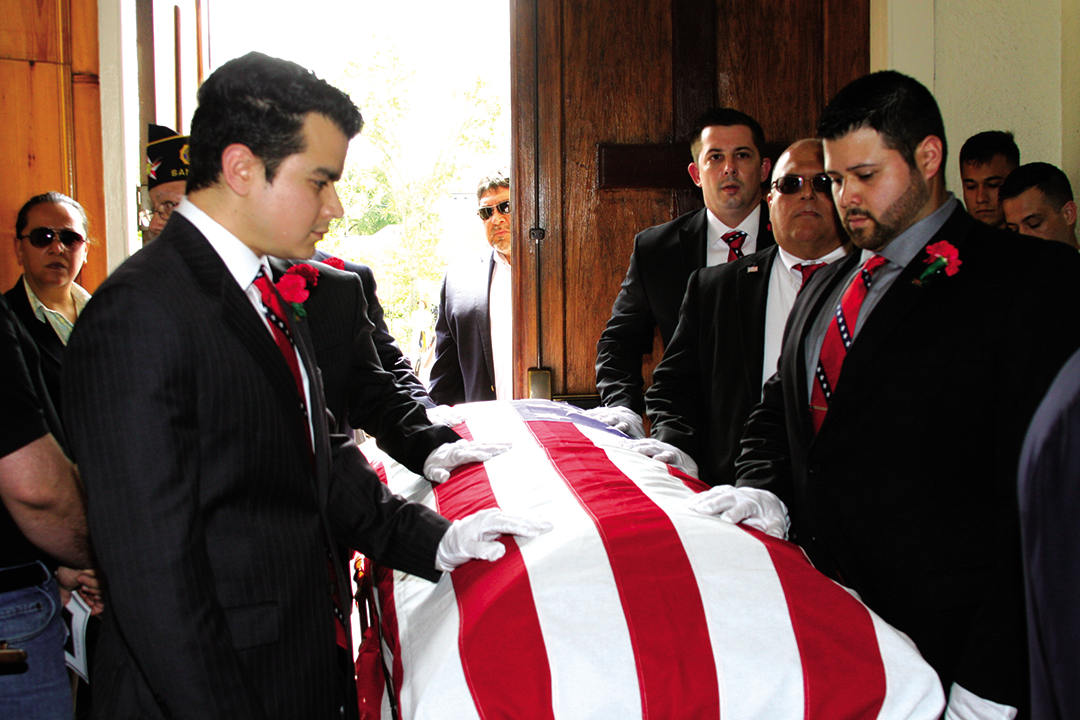 Pallbearers stand over the flag-draped coffin of former Texas Congressman Eligio “Kika” de la Garza inside the foyer at the entrance of Our Lady of Guadalupe Catholic Church where his funeral was held March 17 in Mission. Progress Times photo by Joe Hinton

De la Garza was eulogized by his priest, son, daughter and other family members as a good, humble man who loved others and always tried to do best for his family, community, Texas, the U.S. and the world.

“Little did they dream of all the great adventures that awaited this baby and them,” Snipes said. “He had his first communion here. He went to Mission public schools. He didn’t get to graduate from Mission High because he took off for World War II and missed his graduation. He did come back and graduate. I think it was the class of ’94 he came back and walked across the stage.”

“There’s a story that a visitor from the U.S. was in Moscow and he was taken to visit with Russian President, Mikhail Gorbachev. And Gorbachev asked him, through an interpreter, where in the U.S. he was from. The visitor replied, ‘Texas.’ The Russian president asked him, ‘Ah, do you know Kika de la Garza?’”

“The world is literally overwhelmed with praises and all kinds of good memories about Kika,” Snipes said. “Often it is about what a great legislator he was; what a great public servant he was; how much he gave for Texas and the United States. How he represented us well. But a lot of that was always:  ‘He was always a man of the people.’”

Snipes said it was his humble beginnings as a shoe shine boy and being raised in the rancho that became Mission that grounded De la Garza to his home and its people.

“This town grew up from the old ranch,” Snipes said. “Those solid, earthy, kind, humble, gentle values were cultivated, I think, from the very beginning.”

Snipes said as a child and altar boy De la Garza accompanied his favorite priest, Father Yves Tymen, known to his parishioners as Father Yvo, throughout the Valley as Tyman conducted weddings, masses, funerals and tended to the people.

“You can tell Kika loved Father Yvo. And he probably learned that Father Yvo loved the people of the Valley,” Snipes said. “And that might have been the beginning of his love for people.”

In charactering De la Garza, Snipes referenced the Bible, Garrison Keillor and British Nobel Laureate poet Rudyard Kipling. Snipes referenced the latter’s poem, “If,” which begins, “If you can keep your head when all about you are losing theirs and blaming it on you,” and ends, “And – which is more – you’ll be a Man, my son!.”

“That’s Kika,” Snipes said.  “He was unflappable; stable, solid, peaceful and strong. I never saw him get freaked out – probably Lucille did,” Snipes said, referring to De la Garza’s widow and wife of 63 years, evoking laughter from attendees.  “But I never did. He was always calm; always said, ‘This is going to work out. I don’t know how, but it just is.

“And he was a man; a man from us and for us. A man who reminded us how good it is to be here and how good the spirit is working in us,” Snipes said.

In the eulogy for his father Dr. De la Garza said his father lived “a remarkable life.”

“And it’s hard to condense it down to a five-minute talk or a column in a newspaper,” De la Garza said. “Fortunately for me he touched so many lives we all have our own Kika memories. From the grateful widow for whom he helped bring her three sons home from Vietnam for their father’s funeral to the elderly veteran that he helped to secure disability benefits.

“He dined with presidents, rubbed elbows with royalty, vacationed with foreign dignitaries and even met the Pope. Yet he remained humble and down to earth. While many on Capital Hill had limos and chauffeurs, Kika would drive to work every day in a little Ford Escort.  After the Metro – that’s the subway in Washington – was built, he rode that in to work.

“He flew coach every weekend back to the Valley. He could go from a White House State Dinner on Thursday to a Tripa Club Pachanga on Saturday,” De la Garza said, referring to the McAllen-based informal organization that started with a handful of members when it was started in 1959 until it disbanded in 2006 boasting over a thousand members including many of the Rio Grande Valley’s most rich and powerful.

Prior to De la Garza’s burial, 84-year-old Amador Ybarra blew Taps for his former colleague at the U.S. Department of Agriculture. Ybarra, a member of McAllen’s Veterans of Foreign Wars Post 8788, remembered De la Garza as a hard worker and a “good guy” to work with.

“He could really shoot the bull,” Ybarra said.

Summing up how her father felt about the people in his life, De la Garza’s daughter, Angela Cisneros, read from a letter to his constituents she said was found in his papers following his death and written as he neared the end of his career representing South Texas in Washington.

“My dear friends, it has been a privilege and a pleasure for me to have served the people of the 15th District. It is you who made all this possible,” she read. “My goal has always been to do the very best job I could in representing McAllen and the outer areas. I hope I will be remembered as having made a difference. Lucille and I thank you for the confidence you placed in us and the help you have given us along the way.

“I trust we have lived up to your expectations. Your support over the past 32 years is something we’ve always cherished. The years have passed very quickly. The experiences and memories gathered along the way will forever be treasured. You friend, Kika de la Garza, member of Congress, 15th District of Texas.”

The service ended with a strong round of applause for Kika de la Garza.