A math teacher, web page designer, aeronautical engineer and jeweler-cum- party designer are the latest recipients of grants from Mission’s Economic Development Corporation, each of whom have start up businesses in Mission.

Recipients of a total $42,500 in grants from the EDC’s Ruby Red Ventures Program were introduced Tuesday during the corporation’s regular monthly meeting at the Center for Education and Economic Development. The grants are provided from a half-cent sales tax assessed by the city. 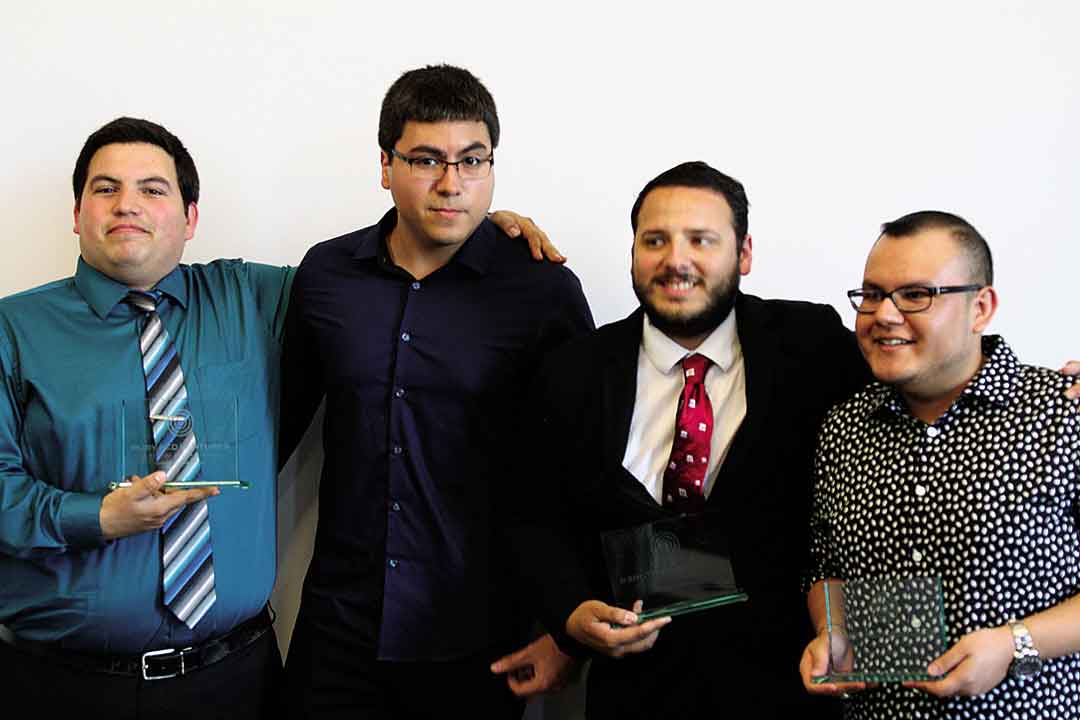 The newest venture belongs to brothers Raul and Noe Peña, who plan to open their mobile game and computer application company, “Gameswipe, LLC ” within the next month in the CEED building on Bryan Road, said Raul Peña, 26. Peña, a graduate of Premier Charter High School in Mission and who holds a bachelor’s degree in computer science from the former University of Texas Pan American, is  currently a web page designer whose clients are Harlingen-based tractor dealerships, he said. Peña’s brother, Noe, 36, is a Mission High School math teacher. Both are expected to receive their master’s degrees in computer science via an on-line course from the University of Illinois in May, Raul Peña said.

The younger Peña said his interest in gaming starting playing his older brother’s games as a child. The one he enjoyed most was Nintendo’s, “Metroid,” an action-adventure video game.

“It’s basically a high scoring game where you’re  shooting monsters and Aliens and things like that,” Peña said, adding he gave up playing video games when he entered high school and started studying computer science.

“You can either play games all day or work on games all day but you can’t do both,” Peña said in a telephone interview Wednesday.

At UTPA as a senior Peña said he mentored other students in game development volunteering for the business school’s Association for Computing Machinery.
Peña said he and Noe won their grant demonstrating a game they had been developing for about month before the demonstrated it for the EDC selection committee they call “Rogue Ball.”

“There’s a ball bouncing on the screen of your telephone and you have to catch it by tapping on it with your finger,” Peña said. “It’s not as easy as it sounds and we purposely make it harder and harder for you to catch the ball. The games are short and challenging. Something to do while you are waiting for something. ”
But Peña said he expects once up and operating, the majority of the brother’s revenue will come from creating computer applications such as programs for inventory and employee communications.

Peña said he and his brother hope to have their company up and running in April. He said they’re investing an amount about equal to the $12,500 they received from the EDC.
The EDC awarded $14,000 to Mission businessman, David Avila, owner of Geeks and Jocks, a sports and comics collectables shop located on the northeast corner of Conway Avenue and Kika de la Garza Loop.

EDC program director Cristina Garza said one of the reasons Avila received the grant was its location in downtown Mission which the city is trying to develop.

Avila has a degree in Aeronautical engineering from the former UTPA and is a manager for the aerospace engineering firm RBC Bearings, Inc., of Oxford, CT, which provides ball bearings to companies such as Boeing, Bell Helicopter and Airbus among others. The company has a ball bearing factory in Reynosa, Tamaulipas, Mexico where his parents live.

Avila said he has dual citizenship having been born in Hidalgo but raised in Reynosa before moving back to McAllen where he first opened his business in a much smaller location . He said he learned of the Mission location via Camera de Commercio International, a non-governmental organization that promotes cross border trade and provides rent subsidies for some start up businesses, he said.

On Wednesday afternoon following the EDC meeting Avila returned to his 1,800 square foot business where he sells sports and comics collectables. He has a full-sized, fully dressed statue of Batman in his store where on Wednesday about ten young men sat at three tables some playing board games and others on-line electronic games that he also sells. Sunday through Wednesday players play for free but must pay a nominal entry fee for tournaments that occur Thursday through Saturday nights.

Avila said he plans to use the grant money to expand and improve the business by putting vinyl wrapping on the storefront windows so he can better advertise his products and services. He also wants to purchase classic 1980s arcade games such as Donkey Kong and Pac Man. He also plans to expand his sporting goods, starting with skateboards.

“We wanted to venture out into some sports but figured out extreme sports would be better for us to bring in a different kind of clientele,” Avila said.

Avila said he plans also to return to the Alamo Comic Con in May. He said in October he was only one of two Rio Grande Valley stores in attendance at the San Antonio event. He also plans to attend the Laredo Collector’s Expo in Laredo in October.

Avila said he opened his doors in McAllen two years ago on May first and grossed approximately $50,000 in his first year. He said he might have made more except for the move to Mission in October of last year.

In addition to his engineering job and his business, Avila is a sports writer for the Spanish language magazine, Latino Hits.

The third grant recipient was Abraham Neave, who received the largest sum of $16,000. Neave’s family owns a Mission jewelry store also located on Conway Avenue but Neave said Wednesday following the EDC meeting his passion is creating party decorations for upscale events. He said his specialty is creating desert and candy tables for weddings, quincenearas and other events. He calls his fledgling company “Sweet Confetti.”

Neave said he plans to invest his grant in large printers to produce special backdrops for corporate logos and 3-dimensional printers to create specialty decorations, among other equipment.

“For example if there’s an Oscar themed party we can create Oscar shaped table ornaments,” Neave said. His family’s jewelry store is already using the printers to create custom rings, he said.

Neave said his company is also looking to expand into virtual realty theme parties where clients place themselves in nearly any setting such as the Eieffel Tower wearing virtual reality glasses.

But he said the bread and butter of his company will be in working with clients to create unique dessert and candy table displays.

“Right now the candy tables and dessert tables are very ‘in,’” Neave said. “So you’re going to see those pretty much now. It’s a trend. Those used to be simple and now they’re getting more elaborate. What we want to do is take it a step further to create those custom designs and custom experiences for our customers.”