The Palmview Lobos have plenty of big game experience on the baseball field. This season’s group is loaded with nine senior, seven returning starters from the last year’s Regional Quarterfinalists team, and is in the hunt for a district championship.

Senior pitcher and third baseman Leo Perez earned District 30-6A MVP honors a year ago, but is looking for more success in his final season as a leader on this Palmview team. 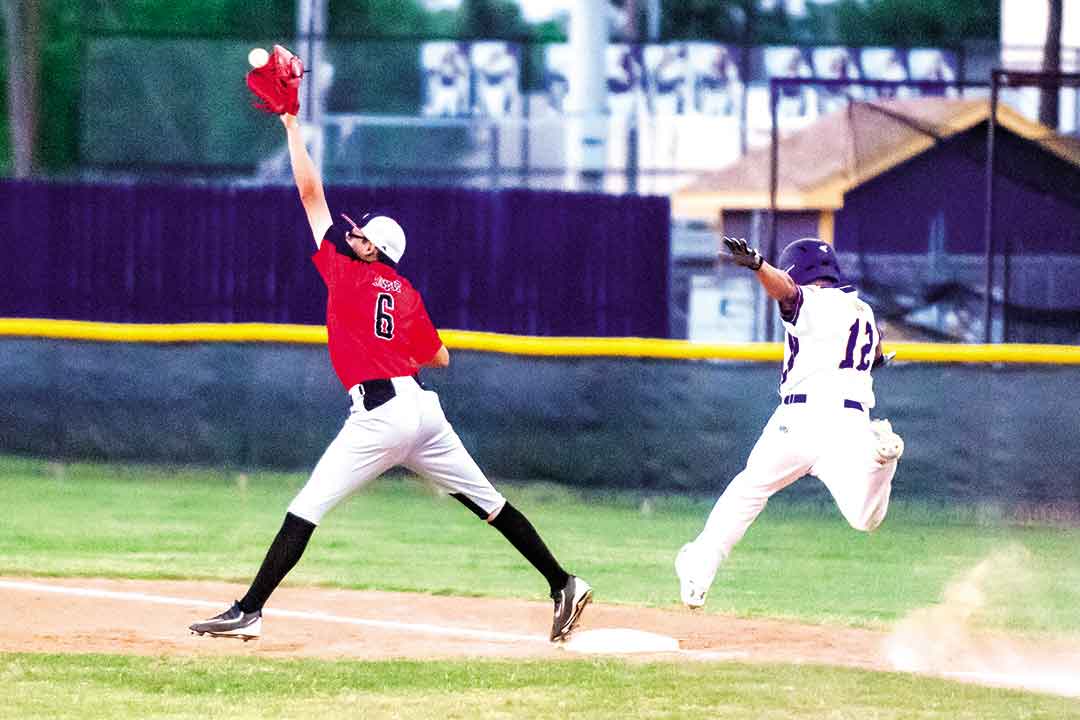 Palmview first baseman Erbey Polanco reaches for the ball while attempting to keep his foot on the bag as a McAllen High baserunner races to first during the third inning of the Bulldogs 4-2 win over the Lobos. Progress Times photo by Luciano Guerra

“As a senior and leader, I’m going to push them harder to accomplish going undefeated from here on out,” Perez said. “Our team goals are to win district champs and go to the third round, and probably even further.”

“I got MVP last year but it’s just something they give you,” he said. “This senior year I want to take it up a notch and come out more than I did last year.”

The Lobos are neck and neck with the McAllen High Bulldogs in the race for the 30-6A crown.

The two teams entered Tuesday night’s battle for first place boasting a 4-0 record through two weeks of district play. The Lobos were riding a six-game winning streak while the Bulldogs were coming off five straight victories, both with their eyes on finishing at the top of District 30-6A.

The game at McAllen High School began as a pitcher’s duel between Palmview senior Elias Ovalle and McHi’s Abanny Garcia. Each pitcher shut down the opposing bats early, but fielding errors by both teams led to runs on the board.

In the top of the fifth inning with the Lobos down 3-0, senior designated hitter Jesse Guzman blasted a ball past the center and right fielder to awaken the Palmview offense with a double. Sophomore Erbey Polanco hit into a fielder’s choice, scoring Guzman to make the game 3-1.

Ovalle, a 2nd Team All District member from a year ago, drove in a run with a double that led to a bad throw to third base, allowing Victor Flores to score and bring the game to 2-3. Costly errors caused the Lobos efforts to fall short in the end as they lost the game 4-2.

The first district loss for the Lobos moves them down to second place in 30-6A with a 4-1 record. Although the team remains focused on the game in front of them, Palmview is looking forward to seeing the McHi Bulldogs, this time on the Lobos turf, for what will be a game with district championship implications.

“Our goal is to win the district title,” Garcia said. “We’re not giving up on anything. We’ll regroup, go home and have a good practice and talk about the situation that we’ve gotten ourselves in and try to fix it by the time we get to the next game and keep on playing the way we’ve been playing.”

“We’re going to take one game at a time,” he said. “You can’t take anybody lightly in our district. We’ll worry about McAllen when we get there.”

Palmview will be looking to get back to their winning ways tonight when they take on the La Joya Coyotes at 7 p.m. at Palmview High School in a rivalry game. The Coyotes currently sit tied for third with the Mission Eagles in District 30-6A with a record of 3-2.

“We’re going to take that game like an undefeated team but every team we play is a team that can beat us or we can beat them,” Perez said. “…and the next time we play McHi we should be able to execute; it’ll be another game.”