The softball playoffs are rapidly approaching as teams fight for postseason position.

The Pioneer High School Lady Diamondbacks are rolling through District 31-5A with an undefeated 11-0 district record and 18-4 overall this season. Pioneer, in just its third year since the school opened, has built a winning softball program rich on playoff tradition. 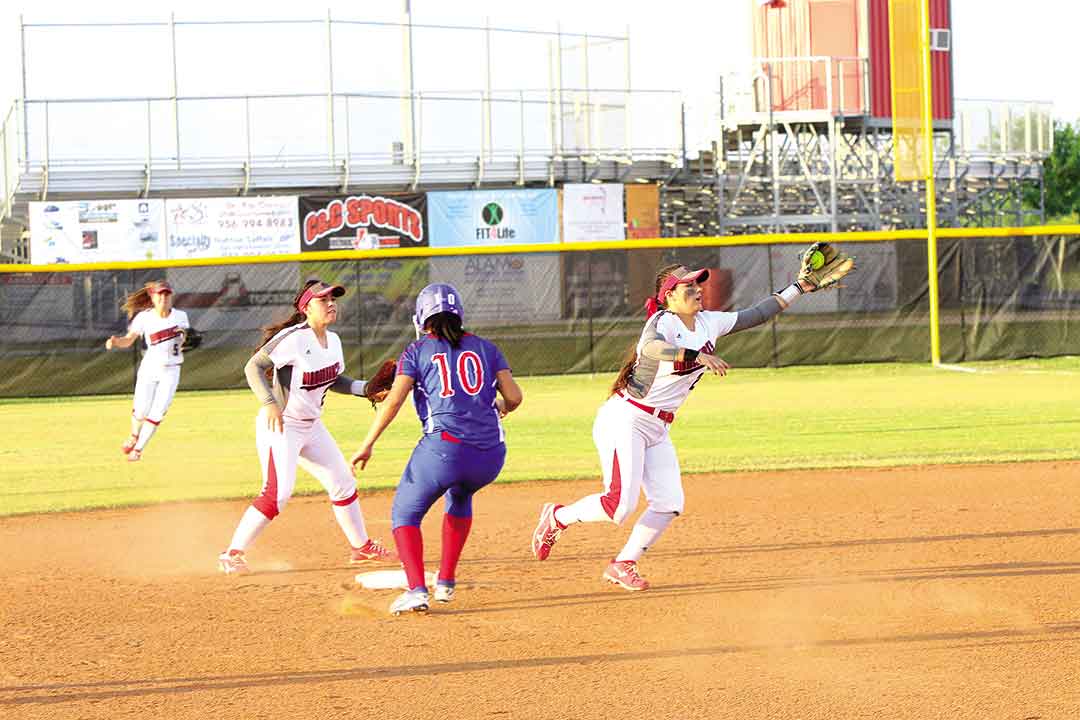 Head Coach Orlando Garcia said five seniors on the team have played a big role in building the program.

“We have a core of seniors; our five girls that our seniors have been with us since we’ve started and it’s a blessing when you have five girls like that that can play,” Garcia said. “Compound that, we start two freshmen and some young girls in between, so it just makes for a good group and they’re receptive to what we want to do and that’s got us to 11-0.”

Last season, the Lady Diamondbacks went unbeaten in 12 district games, claiming the 31-5A championship in impressive fashion. The team finished with a 24-10 record and went two rounds deep before losing in three games to Calallen.

Lopez, who has spent years catching for Youngblood building a strong rapport, said she’s enjoyed proving people who doubted the young softball program wrong and hopes to go out with a bang.

“We had a lot of people doubting us at the beginning and I think we’ve proved them wrong,” Lopez said. “Three years going and hopefully soon to be back-to-back-to-back district champs and that’s our main goal and going out with a big bang, at least for the five seniors on the team.”

Michki said the team’s chemistry is what has allowed the team to be so successful early on.

“I think the bonding between the team is crazy,” she said. “Our chemistry is fantastic and I think that’s the one thing that a team really needs, is the chemistry and how the team gets along together.”

After a 12-2 win over Mission Veterans Memorial on Tuesday, Pioneer’s focus now shifts to the 11-1 Rio Grande Lady Rattlers, who are right on their tail. The Lady Diamondbacks handed the Lady Rattlers their lone district loss in the teams’ first meeting on March 7 at Pioneer High School, winning 5-2.

The top two teams in 31-5A softball meet tonight (Friday) in a rematch with district championship implications on the line. The first pitch is set for 7 p.m. at Rio Grande City High School.

Youngblood, who picked up the 12-2 win over the Lady Patriots, drove in two runs with a triple and scored herself after a bad throw to third base. Youngblood also struck out seven batters in five innings. She is focused on the challenge Pioneer has lying ahead.

“Everyone has a big role on this team and we all play together,” Youngblood said. “It’s a good feeling. These next two big games, they’re really big for us. We just have to play together and play as we normally do and we should get it done.”

Garcia said his team has goals but is focused on the big game in front of them.

“Our biggest game is Friday,” he said. “That’s our biggest game coming up. We told the girls, last year we went 12-0 in district and obviously we want to carry that and go 16-0 but we have loftier goals than that, and that’s to get a couple rounds deep in the playoffs.”

The Lady Patriots are back in action at 7 p.m. tonight (Friday) as they host the Laredo Nixon Mustangs at Veterans Memorial High School. They will be looking to get back to their winning ways in hopes of claiming one of the final playoff spots in District 31-5A.

With Tuesday’s loss to Pioneer, the Veterans Memorial is now 10-11 on the year and 7-5 in district. The Lady Patriots are led by senior pitcher and outfielder Iliana Contreras, sophomore shortstop Makenzie Gerlach, freshman catcher Alexia Hernandez and coached by Vivian Ray.

The Sharyland Lady Rattlers are coming off a dominating 18-1 victory over Roma, improving to 13-7 overall and 9-2 in District 31-5A, good enough for third place behind Pioneer and Rio Grande City. The Lady Rattlers take the field tonight as they travel to Laredo to take on Cigarroa High at 7 p.m.

The Mission Lady Eagles are currently on the outside looking in at the playoff picture with a district record of 3-5. With only four district games remaining, the Lady Eagles need to make ground up quickly as they chase the fourth place Nikki Rowe Lady Warriors.  Mission’s next chance to right the ship comes tonight when they host Juarez-Lincoln at 7 p.m. at Mission High School.