On Monday it will be exactly four years since an explosion at the West Fertilizer Company near Waco killed 15, mostly firefighters and other emergency response personnel, while they were fighting a fire at the company’s storage and distribution center.

As a member of Mission Fire Department’s honor guard, Firefighter Samuel Carrion Jr., was on duty at the April 25, 2013 funeral for the 15 victims held in the packed 9,000-seat Baylor University basketball arena. Also in attendance were President Barack Obama, Gov. Rick Perry, and more than 300 bagpipe players, the latter of whom had volunteered their talents to honor their fallen comrades. 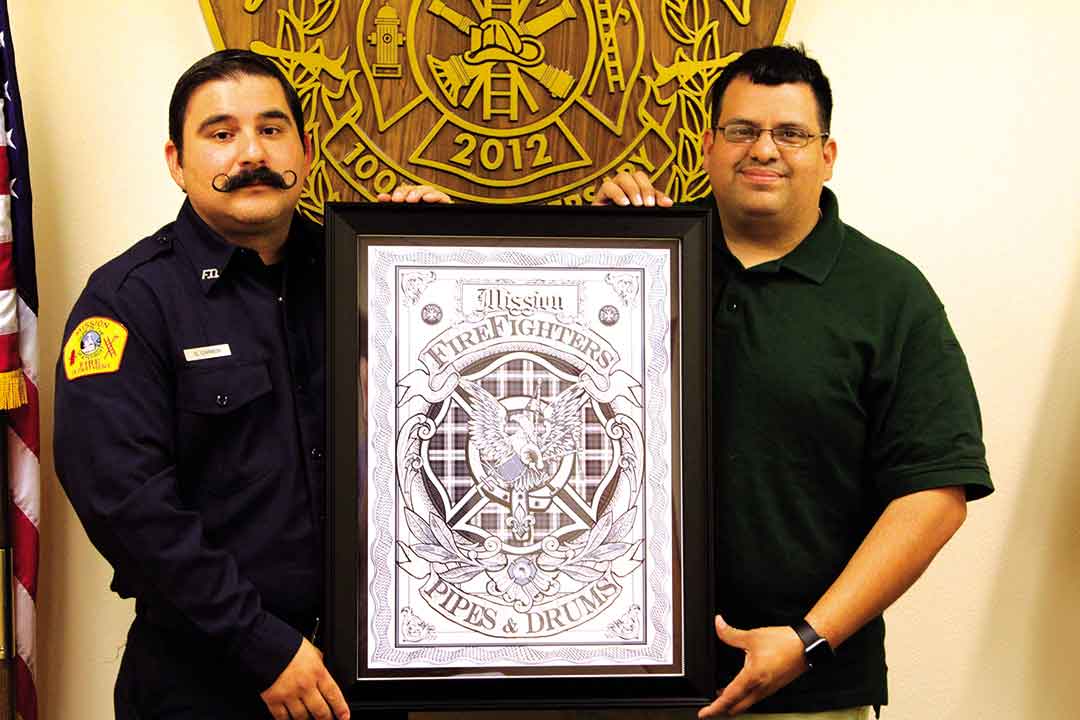 “And once they started playing, ‘Amazing Grace,’ there was not a single dry eye in the room, including myself,” Carrion recalled in an interview Wednesday. “We were all crying.”

The moment so moved Carrion, 35, who has been with the department for 12 of his 14 years as a firefighter, he taught himself to play the bagpipe soon after.

“I came home and said that’s something I want to bring to our department and our city and I want our guys to experience that,” Carrion said. “And I want their families to have that should we lose one in the line of duty. And their families will have the bags to memorialize their loved one.”

Carrion’s fellow Mission firefighter Eric E. Olivarez, felt equally inspired. In 2015 Olivarez and four other firefighters created EnTrust, a 501(c)3 nonprofit organization. Olivarez said the nonprofit was originally created to raise funds for projects such as turning the department’s old central fire station at 500 E. Tom Landry Boulevard into a museum or build a memorial wall for police and firefighters who have served their community. But Olivarez said the focus changed following the death of two former Mission firefighters and the organization had to hire a bagpipe player from outside the community to honor the former firefighters at their funerals.

Carrion’s debut performance occurred in October of last year during a promotion ceremony for firefighters held at Mission City Hall. Since then Carrion said he has performed at about 30 events throughout the Valley, the most recent being the funeral of a 32-year-old Brownsville firefighter who died of a heart attack the morning after he posted for a structure fire.

Last month Carrion’s accomplishments were recognized by the California-based company, Sport Kilt, Inc., a supplier of Scottish attire and accoutrements in the U.S. The company featured Carrion in its “Clan Brave” promotion in which  bravery is defined as “doing something that scares you.”

“Namely, for taking on the challenge of learning to play the bagpipes for the fire department and to honor someone who is honoring others, and looking great in a Kilt as well,” Ansite said.

Carrion compared overcoming performance anxiety with the bagpipe to the fear a firefighter experiences entering a fire.

“After 14 years as a firefighter I’m still very cautious and there is fear going into a fire. But even performing I still get sweaty palms and my stomach gets jittery,” he said.

The recent arrival in the department of volunteer firefighter, Oswaldo Mateo, a former member of Mission High School’s Drum Line, has inspired the firefighters to expand into a Pipes and Drums corps.

Though Carrion purchased his own bagpipes and Scottish-themed outfit, the firefighter’s nonprofit is seeking donations to help raise about $20,000 to fund the  Pipes and Drum corps they hope will be comprised of one or more bagpipe players with two snare drummers and a base drummer to hammer out cadence during marches and processions.

Carrion said he spent about $1,800 on one of the least expensive bagpipes available with plastic components. He said traditional bagpipes made with African Black Wood can cost up to $4,000. And uniforms alone can cost about $2,000, he said.

“And that would include the kilt, shirt, hat, spats and sporran,” Carrion said, the latter item being the leather shoulder bags that function as pockets for the pocketless kilts.

“And they’ll also need sticks, harnesses and carrying cases so the drums don’t get damaged, so that alone is about $2,000 to $3,000,” Carrion said.

Olivarez said several firefighters have expressed interest in joining the Pipes and Drums corps but he fears the costs of the project will be prohibitive to some.

“And some have said they’ll even buy their own drums so we can get this going,” Olivarez said, adding Drums and Pipes corps have been adopted not only in this country but as far away as Spain and Mexico City.

Carrion said he performed at a fundraiser for the corps last month at Our Lady of Guadalupe Catholic Church. And recently Olivarez established a web-based funding account to help establish the corps. Persons wishing to assist with the Pipes and Drums corps can go to www.gofundme.com/mission-firefighters-pipes-drums.

“Our goal is for the band to perform at line of duty death funerals and to assist whether it be fire, police or military and provide those honors,” Carrion said.