This year’s Juarez-Lincoln Huskies (30-3-1) have already etched their names in history books, advancing to the UIL 6A State Soccer Tournament for the first time in the school’s nine years of varsity soccer, but they aren’t done yet.

District 30-6A’s Offensive Player of the Year, junior forward Gerardo Reyes, said the Huskies had their sights on a trip to state since getting bounced in the third round of last year’s playoffs. 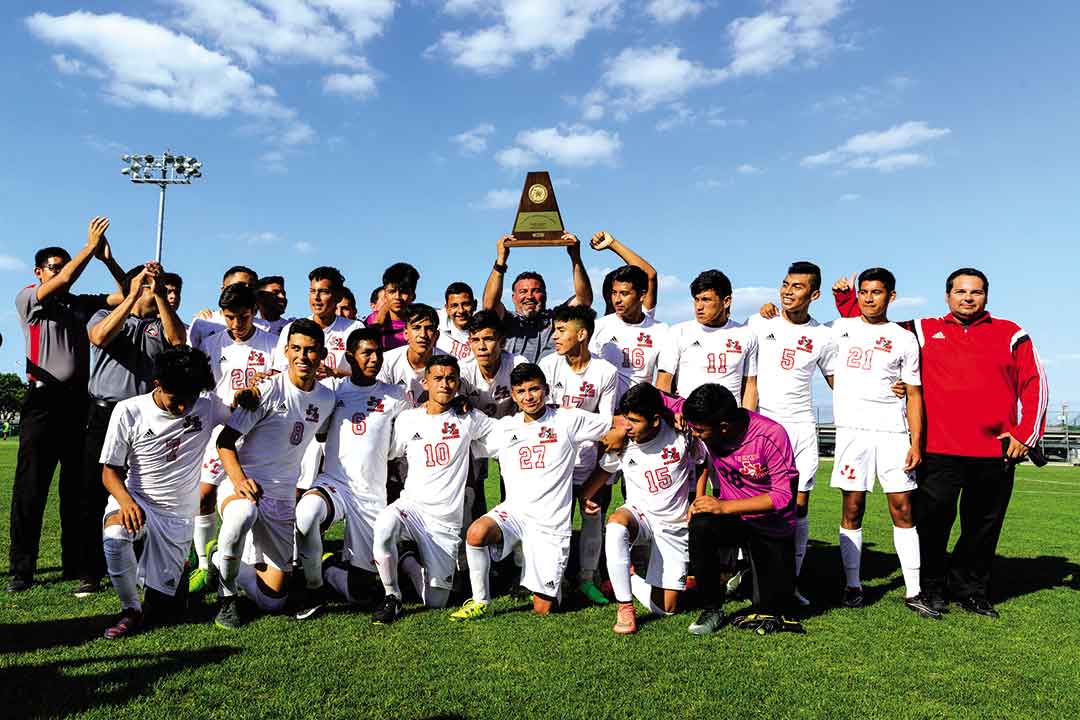 “Since last year when we got eliminated, we were like, ‘next year,’” Reyes said. “We wanted to get into the state tournament and now here we are.”
Last week’s 1-0 overtime victory over the Edinburg North Cougars in the Region IV final in San Antonio made the Huskies one of the final four 6A teams left standing in Texas with a chance at the state championship.

Reyes, who has scored in each of the five Huskies playoff games thus far, found the back of the net with the game-winning goal in the fourth minute of the overtime period. He said the team was able to keep their composure and focus on advancing to the state tournament.

“Coach always tells us to stay calm and touch the ball around,” Reyes said. “There was no pressure. We went to win the region so we could go to state. We were mentally prepared for those kind of games.”

The trip to the State Tournament is one the Huskies have been chasing for years.

“It’s a great honor; I’ve been on varsity ever since my freshman year and I’ve wanted to go to state with the players I was with,” Castrejon said.

“Luckily, I have the chance to go with this team and it feels great knowing that we’re making history.”

Now, the only thing standing between the Huskies and a spot in the state championship game is a semifinal match against the Dallas Jesuit Rangers (20-3-1).

Dallas Jesuit earned its way to the final four with a 2-0 victory over the Sachse Mustangs 2-0 last weekend in the Region II 6A final. This is the Rangers’ third UIL 6A State Tournament in program history.

Huskies Head Coach Victor Ramos said a pre-district trip to Houston for the Katy Mojo Showcase, a tournament the Huskies won, showed him this team was different from past seasons.

“Since the beginning we’ve had great years and some things were missing,” Ramos said. “One of the first things this year was we had that trip to Houston to see different soccer. I think that helps out a lot as a team. I think that’s going to help us out with this game because they play a similar style.”

Reyes credits the team dedicating their summer to improving on the pitch and now the Huskies putting the final touches on preparing for the challenge Dallas Jesuit presents.

“It’s going to be a tough game but we’re looking forward to winning this thing,” Reyes said. “We’re getting really mentally prepared. We’re a good team and we’re capable of playing with any team in the whole state of Texas.”

One winning streak will come to an end as the teams are set to clash tonight in the UIL 6A State Tournament. Kickoff between Juarez-Lincoln and Dallas Jesuit is set for 7:30 p.m. tonight at Birkelbach Field in Georgetown.

According to a news release from the La Joya school district, Juarez-Lincoln High School will host a free live stream of the game tonight at their gym.

Ramos said the entire district has shown support for the team as they prepare for their state semifinal matchup. The Huskies are excited for their appearance in the final four and are hoping to play their best game of the season tonight, showcasing Juarez-Lincoln soccer.

“We want to play our best game; we’re going to play Juarez-Lincoln soccer,” Ramos said. “Passing the ball, short passes, speed and opening up the field. That Latino game, we want to keep playing like that.”

On the other side of the 6A bracket will be Arlington Houston (21-2-2) against Pasadena Dobie (20-2-4).The winners of each semifinal will meet in the championship match for the chance to be crowned the best in Texas at 6:30 p.m. Saturday at Birkelbach Field.

Two other teams from the Rio Grande Valley qualified for the State Tournament, joining Juarez-Lincoln—the Progreso Red Ants in 4A and the Brownsville Lopez in 5A.

Castrejon said he’s proud to be representing Juarez-Lincoln and the Valley, displaying the talent South Texas has to offer.

“The Valley has lots of talent and we’re demonstrating it too,” Castrejon said. “It’s a good thing that we’re all representing our schools and I’m happy to represent mine. We’ve been waiting for this opportunity and we’re going to take advantage of it and hopefully we win that state title and bring it back to Juarez-Lincoln.”