About 50 elected officials and other local leaders turned out Wednesday afternoon to attend the unveiling of a plaque in honor of Texas Republican U.S. Sen. John Cornyn at the Anzualduas International Bridge. Mayors from the cities of Mission, McAllen and Hidalgo and the governor of neighboring Tamaulipas, Mexico were among them. All of whom praised Cornyn for his support of infrastructure in the area that facilitates free trade.

“Trade between both countries, especially between both our states has never been more important,” said Tamaulipas Governor Francisco Garcia Cabeza de Vaca. 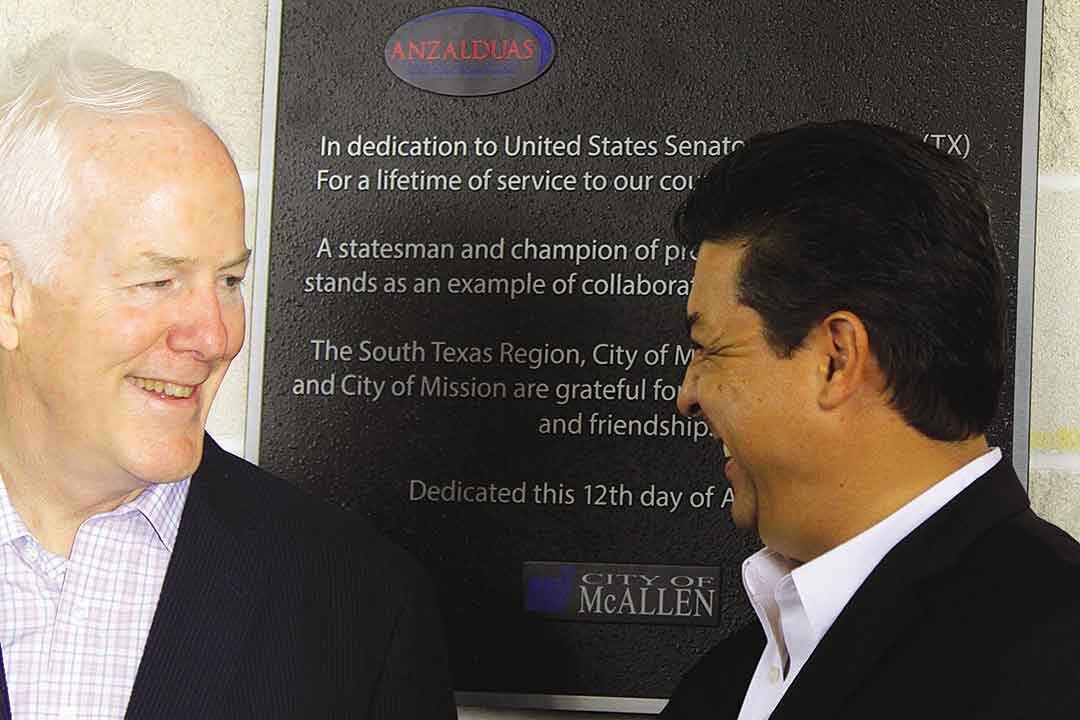 “Over one billion dollars come over the border between Texas and Tamaulipas daily. Over six million jobs in the United States and millions more in Mexico are the result of trade between both countries.”

Cabeza de Vaca praised Cornyn as one of the most proactive senators on border issues and the promotion of free trade between the two nations.
Cornyn told the gathering at the bridge’s administration building he would continue to support the North American Free Trade Agreement despite President Donald Trump’s comments it is an unfair deal for the United States and should be renegotiated.

“I’m here to say that NAFTA and trade in general is not a dirty word,” Cornyn said. “It’s important. Texas is the number one exporting state in the nation…so it’s something worth fighting for.

Cornyn said that while border security deserves attention it should not be allowed to interfere with free trade.

“It’s important that while we maintain security we continue to keep the corridors of commerce open and alive and benefitting both sides of the border,” he said.

Following his speech Cornyn held a short press conference during which he was asked to comment on the Border Adjustment Tax proposed by U.S. House Speaker Paul Ryan. Cornyn said he was skeptical about the proposed legislation.

“There’s a number of industries whether it’s automobiles, retail industry, oil and gas industry, all of which would be negatively impacted,” Cornyn said.

According to the website, Investopedia, a border adjustment tax is a short name for a tax levied depending on where a good is consumed rather than where it is produced. It cites for example, if a corporation ships tires to Mexico where they will be used to make cars, the profit the tire company makes on the tires it exports isn’t taxed. However, if an American car company purchases tires from Mexico for use in cars made in America, the money it makes on the cars (including the tires) sold in the U.S. is taxed. In addition, the company cannot deduct the cost of the imported tires as a business expense, according to the site.

“I think it’s really important to get tax rates down, to make our economy more competitive, to make America more competitive in the world. But I don’t think the border adjustability tax is the right answer,” Cornyn said.