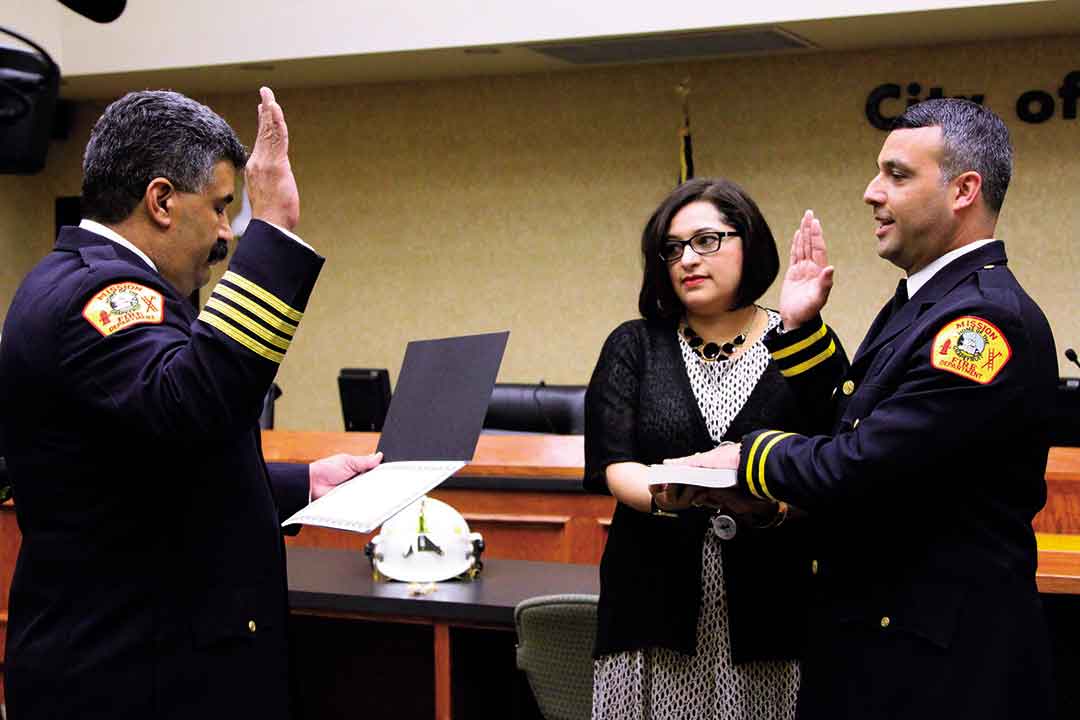 On Wednesday, in one of his first official duties as chief, Sanchez swore in 12-year department veteran Robert R. Alvarez, 41, as the first assistant fire chief in the city’s history. Sanchez said he picked Alvarez, who was a training captain with the department the past three years, because of their mutual respect and ability to work well together.

City Manager Martin Garza said Sanchez first proposed creating the second-in-command position while interviewing for the permanent chief’s job. Sanchez was appointed interim chief on November 28 replacing retiring Chief Rene Lopez. Sanchez, 49, has been with the department since 1994 and had served as fire marshal since 2000 before his appointment as interim chief.

Citing the city’s anticipated growth and the upcoming construction of the city’s sixth fire station, Garza told a crowd of mostly fire department and city staff during Wednesday’s swearing in ceremony at city hall, he thought it made sense to create the new position.

“We’re building a foundation of administration that we hope will last for many years to come and to become a better department than what we already are,” said Garza.

Also Monday the city council authorized providing the Mission Redevelopment Authority $3.7 million toward construction of the new substation to be built on the corner of Schubach and Military Roads.

“We’re looking at a growth on the southwest part of town on the Bentsen Palm Development area that we’d like to be prepared for,” Garza said during a March 28 MRA board of directors meeting. “Right now we have six developments out there with 894 lots total. Future land proposals in that subdivision estimate that we’ll have 9 new subdivisions in the next five years which could lead to a total of 3,685 lots with a minimum of four people per lot. That’s a population growth of at least 18,000 people.”

Sanchez said when the new substation opens it will increase the Fire Department’s current staff of 66 to 74.

“With the growth of the city and the growth of the department it is getting harder and harder to handle,” Sanchez said following Wednesday’s ceremony. ”So I can’t concentrate on everything at once. That’s why chief Alvarez is going to focus on operations and I’m going to handle the administrative side. And, of course, we’ll both be involved in the planning process.”

Alvarez, a Mission native who graduated from Mission High School, is the son of retired deputy chief, Roberto Alvarez.  Alvarez said he has an associate’s degree in applied science and fire science from Columbia Southern University, an Alabama-based online institution, from which he also obtained a bachelor’s degree in fire administration.

Alvarez joined the department in October 2004 as a full-time firefighter and worked his way through the ranks as engineer, lieutenant and captain, Sanchez said.
Garza called the appointments of the chief and assistant chief a great day in the history of the city.

As the son of a firefighter, Alvarez said he knew from childhood he wanted to be one.

“I wanted to serve people and help people,” Alvarez said. “I saw my dad do it. It’s a great honor for me to be able to take on this role and responsibility.”

“This is a good move for our fire department,” said Garza. “We feel it’s in the best interest of the city and the citizens of Mission in the long run.”