Last year, Sharyland finished near the bottom of District 31-5A with just two district wins, missing the playoffs. This year, the Rattlers are back in the playoff race with hopes of a strong finish down the final stretch.

Head Coach Barton Bickerton is back in the dugout, returning to the program where he compiled a resounding record of 382-76 over a 15-year span from 1999 to 2013. Bickerton spent time as a head coach at Mercedes in 2014, Brownsville Porter in 2015, and most recently as an assistant coach at Port Isabel last season. 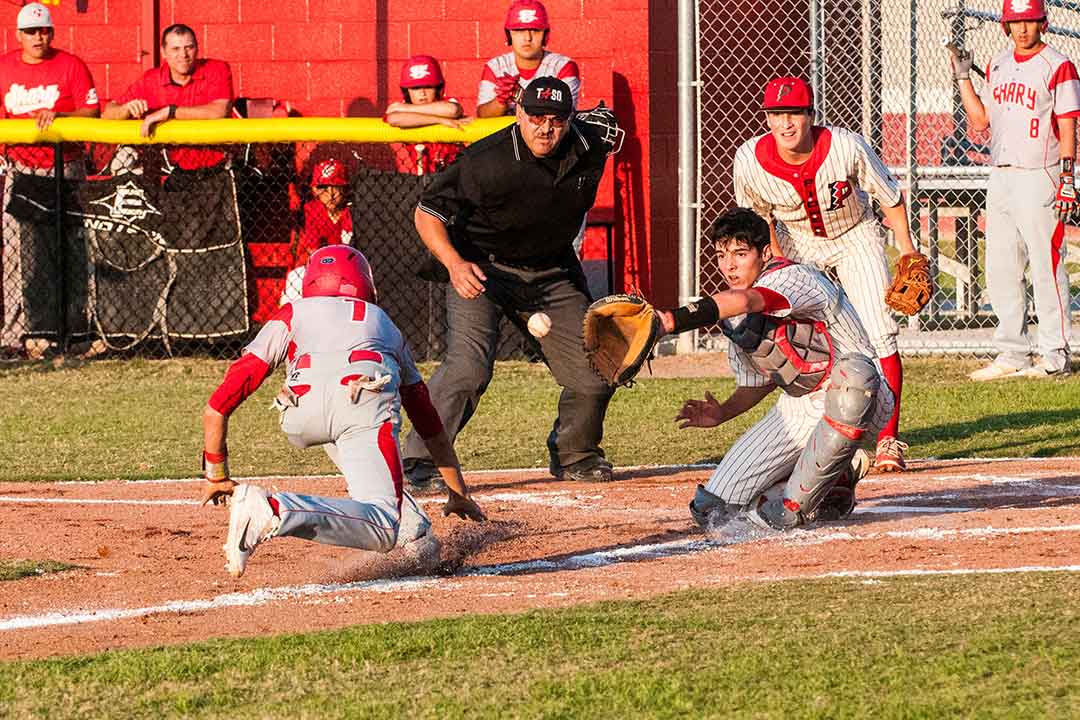 He said he’s glad to be back at Sharyland High with a good group in a tough district like 31-5A.

“It’s been great,” Bickerton said. “We’ve struggled at times but I kind of knew that coming in. The kids have come around during district. It’s been a dog fight pretty much every night.”

The Rattlers missed the playoffs last season, a bit of a change from the 12 district titles in Bickerton’s time at Sharyland. This year, the Rattlers have a young team with only three senior starters, but Bickerton said Sharyland is right where they need to be—in the playoff hunt.

“Our goal this year is to try and squeeze into the playoffs,” he said. “We knew it would be tough but we’re right in the spot that we need to be.  We lost two games we shouldn’t have but we’re where we need to be and at least we control our destiny a little bit here on in.”

The Rattlers are fresh off a 12-7 win over the Pioneer Diamondbacks Wednesday night. The victory moves Sharyland’s record to 6-7 in district, good enough for fourth place in 31-5A. While Roma holds the same record, the Rattlers hold two wins over the Gladiators.

After that, the Rattlers’ final two games next week are against the top two teams in the district, Veterans Memorial (12-1) and Rio Grande City (11-3). Bickerton feels confident the Rattlers can earn a playoff spot with solid play against tough competition.

“We’ve been in a situation where we’ve pretty much considered our playoffs every game from here on in in the second half, so that’s kind of the way we’ve approached it,” Bickerton said. “We’re pretty much do-or-die the rest of the season.  If we win out, I think we’ll have a pretty good chance to pass Roma and we still have a pretty tough schedule ahead of us.”

While the Rattlers remain in the 31-5A playoff hunt, another Big 7 team is chasing the district crown.

The Mission Veterans Memorial Patriots are atop District 31-5A with a 12-1 record. The Patriots lone district loss came against the Rio Grande City Rattlers came in a 2-1 defeat on March 21. The two teams are set for a rematch tonight that could decide the district championship. The game between the Patriots and the Rio Rattlers is scheduled for 7 p.m. at Rio Grande City High School.

In District 30-6A, three Big 7 teams are making a push towards the postseason.

The Palmview Lobos are second place at 7-3 in District 30-6A behind the 10-0 McHi Bulldogs. In the team’s first matchup, the Bulldogs came away with a 4-2 win over the Palmview at McAllen High School. The Lobos are coming off a 9-8 win over Mission Tuesday night and are set for a rematch tonight with the unbeaten Bulldogs. The game between the top two teams in 30-6A is set for 7 p.m. at Palmview High School.

The La Joya Coyotes have worked their way to third place in District 30-6A with a 6-4 record.  The Coyotes picked up a 10-3 win Tuesday night over Juarez-Lincoln, allowing La Joya to put some room between the contenders competing for the fourth spot.  La Joya is now set to take on the Nikki Rowe Warriors tonight at 7 p.m. at McAllen Rowe High School. The Coyotes season finale will be a 7 p.m. rivalry game against the Palmview Lobos at La Joya High School on Tuesday.

The Mission Eagles are currently tied for the fourth and final playoff spot in District 30-6A with the Nikki Rowe Warriors.  The Eagles are coming off of a close 8-9 loss to Palmview on Tuesday night, which moved them to 5-6 in league play. Mission’s final regular season game against the McHi Bulldogs is scheduled for 7 p.m. Tuesday at McAllen High School.

Keep up with the latest Big 7 baseball action at The Sharyland Times & The Progress Times.