Ever since he could remember, La Joya High School Arts and Humanities Academy student Raul Resendez had some sort of musical instrument in his hand. Whether it was a plastic toy instrument his parents bought him, or his current 14-pound accordion, Raul inherited his family’s love for music.

As a 7th grader at Cesar Chavez Middle School, Raul was drawn to the sound of the accordion at that age. 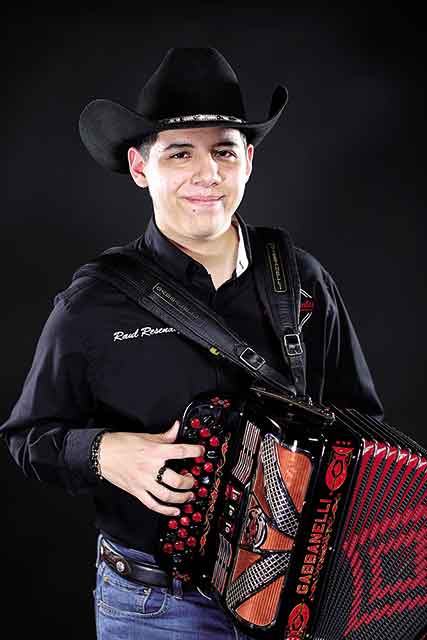 “I remember my dad telling my mom that I was going to lose interest in trying to play the accordion after two or three months,” Raul recalls jokingly.

Fast-forward four years, and Raul has yet to lose interest in his instrument or in music.

“I taught myself how to play by watching videos on YouTube!” Raul recalls. “I was also really inspired by accordion player, Beto Zapata from Grupo Pesado (a norteno band). I would YouTube videos of him and others as I was trying to develop my own style.”

And it was Raul’s unique style that allowed him to advance and become one of four finalists for Texas Folklife’s “Big Squeeze” Competition which will take place April 22, 2017, in Austin, Texas.

Raul will be competing against three other finalists in the conjunto category. This is the second time Raul has been a finalist in the competition. He was one of four finalists two years ago, but missed the top prize.

“This time I’m not as nervous as I was as a freshman. I’m just going to play and see what happens and hope for the best.”

The well-spoken junior hopes his passion for music transcends as a career in the future. He has high hopes to continue his musical career, along with fulfilling his interest in Business. Raul credits the Academy of Arts and Humanities for opening the doors to expand the opportunity to play his accordion with the school’s conjunto group outside of his school.

“The academy has let us perform outside of school, like at the veteran’s home, at our West Academy (sister school), and we get to perform during our lunch period also.”

Raul hopes his 13-year-old sister and seven-year-old brother take advantage of the Academy of Arts and Humanities at La Joya High School in the future.

“It’s a great opportunity! I hope they can follow in my footsteps.”

Raul will be traveling with his peer, fellow Conjunto student, Misael Rodriguez, who will play the Bajo for Raul, and Cecilio Garza, Resendez’ teacher and conjunto expert.