Based on comments during recent meetings of the Mission CISD board of trustees, there’s a possibility construction of Mission High School’s new multi-million football stadium may not be completed in time for the school’s September 1 season home opener. In the meantime the board has voted to double the size of the bronze statue of Tom Landry that will be the centerpiece art in front of the stadium named after the former Dallas Cowboy’s head coach and school alumnus.

On April 12 trustees voted to give the stadium’s McAllen-based construction company, Holchemont Ltd, 11 additional days to complete the project originally budgeted in November at $8 million and set for completion on August 21. The stadium’s home opener is set for September 1 when Veteran’s Memorial High School plays Harlingen High School. 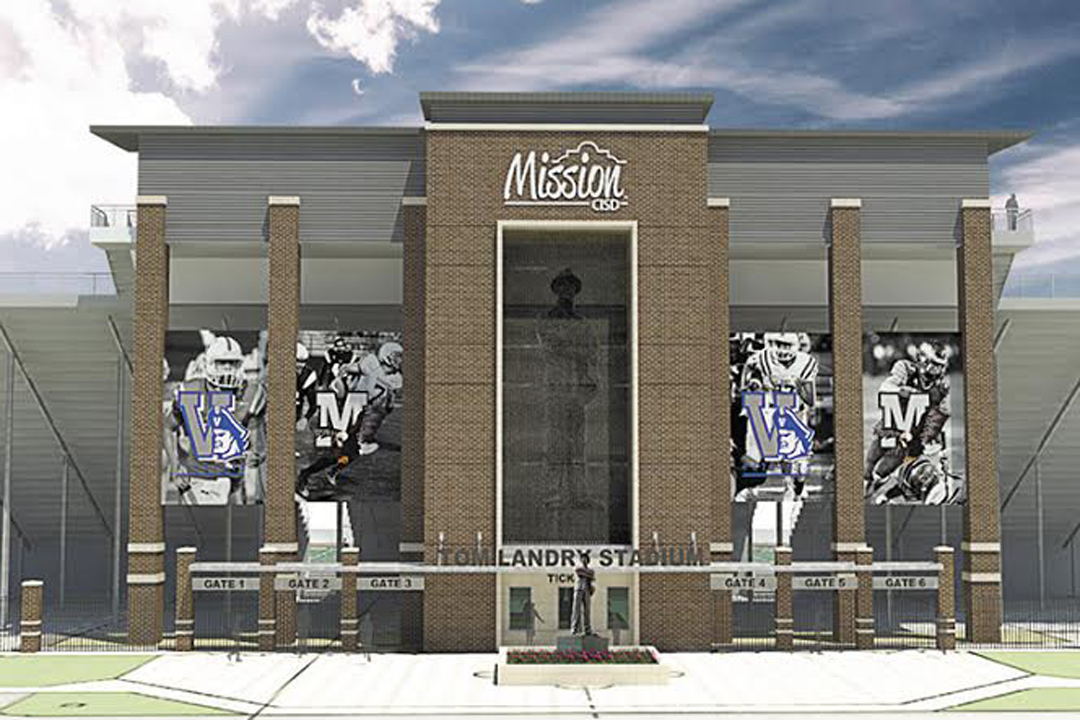 A rendering by Alvarado Architects depicts a 6-foot tall statue of former Dallas Cowboys coach Tom Landry as it would appear in front of the multi-million dollar stadium currently under construction at Landry’s alma mater, Mission High School. Courtesy photo

The additional time was requested due to seven rain days that prevented work on the approximately 9,000-seat stadium and another four days that construction was halted during recent student testing, said Ricardo Rivera, assistant superintendent for operations.

Project architect Eli Alvarado told an April 5 meeting of the district’s Facilities/Environment Committee the project was already about a week behind schedule when he requested another four-day extension due to student testing.&nbsp;&nbsp;

“So our goal is to make up those days to finish by the August 21 deadline,” Alvarado said.

Rivera told committee members the project completion deadline had already been moved to August 28 before the four-day extension was requested for the student testing.

“If those [additional four days] are presented and approved by the board and the contractor needs all those days, the stadium will not be ready for the first game on September first,” Rivera said. “We also need time to get all the inspections by the city, the fire marshal, the elevator inspection and that’s if there are no other delays between now and then. As long as everyone is aware we’re already on an extremely, extremely tight schedule.”

Rivera told board members the school’s athletic director is already working on contingency plans if the stadium is not finished before the season opener.

In other board activity, the Dallas Cowboys football franchise, the City of Mission, corporate and private sponsors, may be asked to help offset the cost of doubling the size of Tom Landry’s bronze statue. That’s what Superintendent Lopez, told board members April 12 when he asked them to allocate an additional $79,400 on top of the $50,000 originally approved for the statue.

In November trustees originally approved on life-sized 6-foot-tall statue of Landry when it approved the new stadium. During the April 5 Facilities Committee meeting Superintendent Lopez said architects and other interested parties believed the 6-foot-statue would be out of proportion to the stadium’s new façade and sought the board’s approval to double the size of the statue to 12 feet in height and increasing the height of the statue’s 2-foot tall pedestal.

“There are going to be things in front of it like parking and you’re going to lose the effect of the whole statue,” Lopez said. “And it’s much like the big eagle and patriot we have [in the stadium]. It has to be grand that people can see as they come in. So if you’re going to do it, do it right.”

During the April 5 committee meeting Trustee Roy Vela expressed concern the additional allocation would diminish the project’s contingency fund down to about $35,000 with just 20-percent of the project completed. But besides seeking public sponsorship to reimburse the contingency fund, Superintendent Lopez reminded Trustees that in January they approved an additional $2 million in contingency funding for the project for unexpected expenses.

“It may seem like a lot of money but in the long term it’s going to have that lasting effect we’re looking for,” Lopez said.

The board also gave its approval for district staff to begin seeking estimates on constructing running tracks and related facilities at the district’s four junior high schools. Lopez estimated the cost at between a half million dollars and $600,000 each. He said final estimates could not be derived until proposals and bids are received from prospective construction companies.

And the board approved spending just under $93,000 to provide two paperback books to each of about 10,143 students for the district’s summer reading program.