Four Big 7 track teams brought home Area Championship trophies last week, and they now have their sights set on the finish line at the Region IV 5A-6A Spring Meets in San Antonio, and a chance at the State Meet in May.

The Pioneer Diamondbacks boys’ team, Mission Veterans Memorial girls’ team, and Palmview’s boys’ and girls’ teams each hoisted an Area meet trophy, beating out two districts worth of competition for the title. 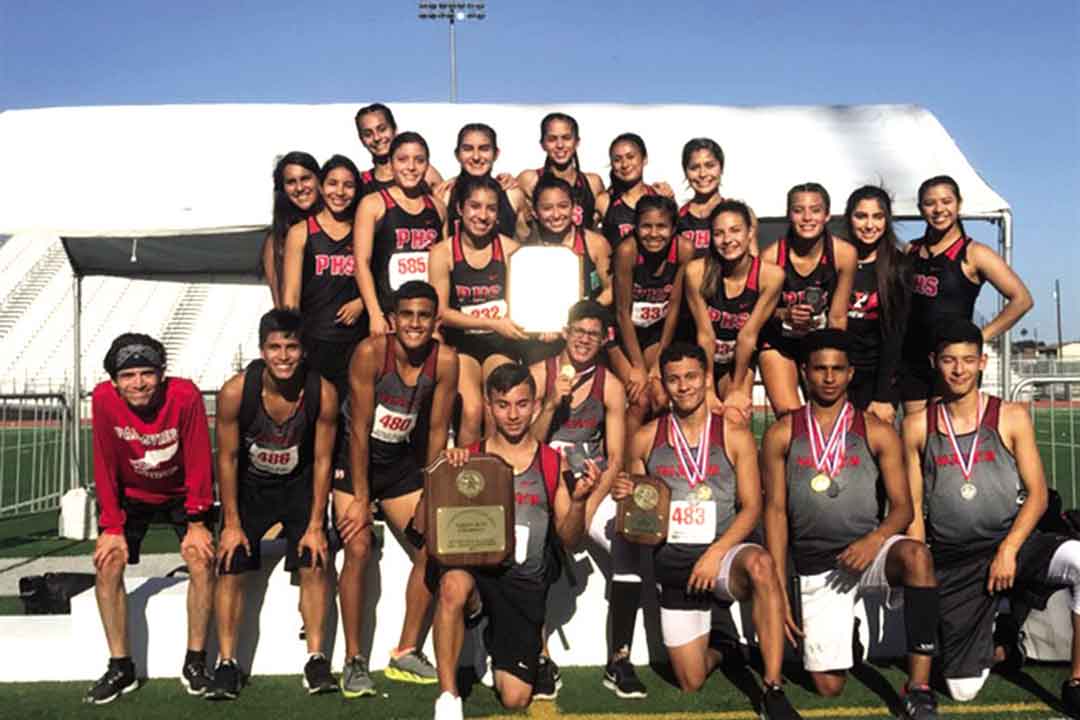 Pioneer was crowned the 31/32 5A Area champion with a dominating performance at Richard Thompson Stadium. The District and Area Champion Diamondbacks, led by Head Coach Tommy Lee, finished with 131 points, while Brownsville Veterans Memorial was a distant second place with 69 points. Pioneer swept the relay races, winning gold in the 400-meter relay, 800-meter relay and 1600-meter relay.

“It’s been one of those seasons that you dream about as a coach,” Lee said. “You got kids in every single event, you got kids that are talented and hardworking that want to go beyond district, beyond area and to the state meet.

“When you win all three relays and score 60 points, schools don’t just get that very often and we’ve been blessed to have five or six guys that have really stepped up and accepted the role of being on relays and concentrating on that.”

Senior Jordan Wilson, who was also named District 31-5A’s Offensive MVP for his play on the basketball court, earned a shot to compete at regionals by winning gold in high jump, silver in both the 100-meter dash and long jump, and fourth place in the triple jump. This is only Wilson’s second year competing in track and he has his eyes on advancing to the state meet in May.

Senior Alec Garcia, who is a captain and in all three relay teams, in addition to a First Team All-District wide receiver and outfielder for the baseball team, said he knows the Pioneer relay teams can perform well against any competition.

“It feels great putting in this hard work and I think we can compete at regionals and at state,” Garcia said. “We just see state as another track race. We don’t get psyched out or too tense about it, we just run our race and I know we can do great things anywhere you put us on the track.”

The Mission Veterans Memorial Lady Patriots track team dedicated the season to Abraham Ibarra, a classmate and basketball player at VMHS who lost his battle to cancer in January. The Lady Patriots made program history last week by winning its first Area championship with a come from behind effort that totaled 89 points.

Heading into the mile relay, Veterans Memorial was trailing Mercedes by nine points. The1600-meter relay team, made up of junior Nyla Vela, senior Alex Jimenez, sophomore Charlize De la Garza and senior Maria Gonzalez, put forward one of their best performances all year on their way to a first place finish with a time of 4:08.41.

“We’ve come in second a couple of times but we’ve never won it, so we talked about those things and being confident in what they’re doing and stepping up to the next level,” Lady Patriots’ Track Head Coach Kathy Howell said. “The girls kept asking me what’s the point total and I kept telling them they’re behind. …They were pumped, they were ready, and they ran one of their fastest 4x400s.”

Palmview High School cleaned up at the 29/30-6A Area track meet last weekend in Laredo, winning both the boys’ and girls’ team championships. The boys’ team racked up 94 points, nine ahead of second place McAllen Memorial, while the girls’ team posted a whopping 132 points to Memorial’s 87 at Area. Head Track Coach Claudia Bazan said the team believes and has worked hard to improve since finishing second to Memorial at the district meet.

“It’s shows that these kids have been working hard,” Bazan said. “They believe that it’s possible. We both came out short in district to McAllen Memorial, a good team, but they were confident that we could go into the Area meet and accomplish what we accomplished.”

Senior Mirna Tamez, who is in her fourth year running varsity track, punched her ticket to Area by winning silver in the long jump, bronze in the triple jump and 100-meter dash, silver in the 400-meter relay and gold in the 800-meter relay.

“This year, coming in with a big senior class, we’ve really been training and working for it so coming in and winning the area track meet has been a big blessing,” he said. “We’ve been cherishing that and we are ready to go forward to regionals. I’m just going in there with a bunch of confidence. As competition goes up, I go up.”

The Region IV Conference 5A and 6A Regional Spring Meet is taking place today and tomorrow at Alamo Stadium in San Antonio.

The finals of the running events will begin at 12 p.m. Saturday. Gates open at 11 a.m.

The State Meet will take place May 11-13 at Mike A. Myers Stadium in Austin.

For more information on the Regional Track Meets, visit https://www.uiltexas.org/track-field/regional-sites