For the last seven years whenever the Zuniga family drove by the Sharyland Towne Crossing in Mission their autistic son, Hector, would look up from his seat, point to the Blockbuster store at the center and repeatedly say one word: Barney.

His younger brother, Javier, father Hector and mother Rose knew this meant Hector Junior wanted to go to Blockbuster to rent a movie. 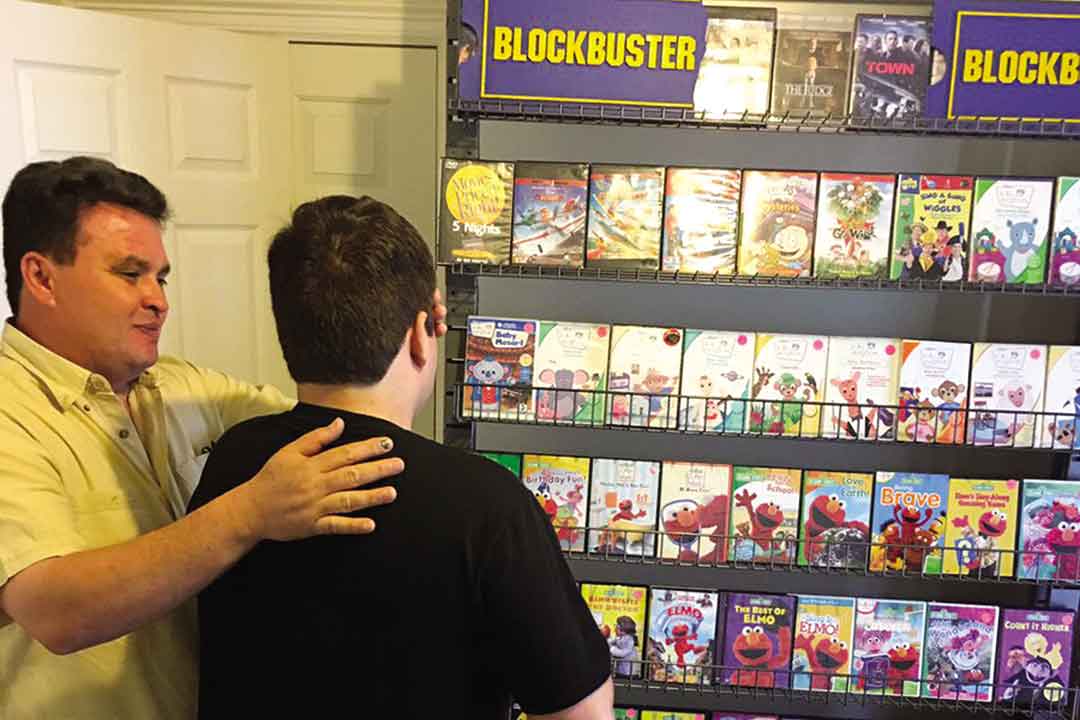 Hector Zuniga Jr. is about to be surprised with an at-home Blockbuster his family created for him after finding out his favorite Blockbuster store was closing.
Courtesy photo

Hector Junior, a senior at Sharyland Pioneer High School, was diagnosed with nonverbal autism, a developmental disorder that impairs the ability to communicate and interact. According to the Centers for Disease Control and Prevention, one in 68 children in the country are diagnosed with autism and one third of those children have a form of autism that leaves them nonverbal, or unable to communicate with their voice.

For Hector, “Barney” is one of the few words he can say, his father said.

“We go to Blockbuster at least twice a week,” Hector’s dad said. “Because of my son’s condition, people remember him and employees at Blockbuster have pretty much seen him grow up and know how he loves renting children’s movies like “Barney,” “Veggietales” and “Blue’s Clues.”

That family routine was threatened recently when store employees pulled aside Hector’s parents during a visit to their regular Blockbuster to warn them in advance the store was closing.

The news of the store closure worried Hector’s parents.

“Hector is a happy-go-lucky kid,” his father said. “He’s all heart. He’s very tender but like anyone else he has bad days. And we knew one of those bad days was around the corner when we found out that the Blockbuster was about to close.”

While discussing how to break the news to their son, Hector’s mother got the idea of recreating the store in their house after learning that Blockbuster would sell their items as part of a going out of business sale. On the first day of the sale last month, Hector’s father bought more than 40 DVDs while his wife made arrangements to purchase racks and signage from the store to display the purchased movies in a spare bedroom at home.

“We could’ve gotten these titles through eBay, but we wanted the Blockbuster cases just like in the store to get him the experience of being in the store,” he explained. “Whenever he had the videos with him, he would actually take them with him to school. That was the anchor for my son to make him happy. The store was a big part of his life.”

Last Sunday, April 23, the Zunigas took Hector to what would be their Blockbuster’s last day in business. When Hector arrived his father said his son was stunned at the sight of the half empty store with his favorite section displaying bare shelves.

“He grabbed my forearm and squeezed. It’s how he communicates that he feels uncomfortable or that he knows something is wrong,” Hector’s father recalled. “He does not like change but we had to take him around the store for him to understand his favorite store was closing. Eventually he took a deep breath and picked three DVDs and some snacks as mementos. You could see in his eyes he understood.”

But Mom and Dad assured Hector everything would be OK.

When the Zunigas arrived home later that evening, Hector’s mother distracted him while his father and little brother Javier created their own at-home Blockbuster store.  Then they led Hector into the room with his eyes covered.

When he saw what we had done, his eyes got super big,” Mr. Zuniga said. “He was looking at all the movies on display as if he was afraid to touch them. We had to tell him ‘This is your Blockbuster, everything here is yours. Look, here’s all the stuff you liked.’ The first thing he did was reorganize all the DVDs in the order he remembered them being in the store.”

Javier shared the special moment by posting photos of the occasion on Twitter. His tweet highlighting his older brother’s reaction to his own Blockbuster has gone viral and received more than 33,000 retweets and 129,000 likes. According to Hector’s father, Javier’s tweet has led to the family being interviewed by multiple outlets such as CNN, Time Magazine, the TODAY show and the British Broadcasting Corporation.

“Every time Hector has a milestone or something good in his life, Javier would post it on social media. This was no different but we’re so amazed that it’s everywhere,” Mr. Zuniga said. “Javier is proud of his brother and they love each other so much. That tweet is an example of the love those two have for each other.”

That night, Hector celebrated his new Blockbuster by taking some of the DVDs to watch them in his room, blissfully unaware of how popular he would become.

“I don’t think Hector knows what’s going on. We’ve shown his videos and retweets, which we’ve read to him, but he’s still too excited about his Blockbuster,” his father said.