For Jaime E. Tijerina timing is everything.

As a staff judge advocate serving with the U.S. Army Reserves in Afghanistan Tijerina said he experienced several close calls involving insurgent attacks on compounds to which he was assigned. Once he and a fellow officer had just turned off a road into a walled area of the compound when a coordinated assault took place one building over. 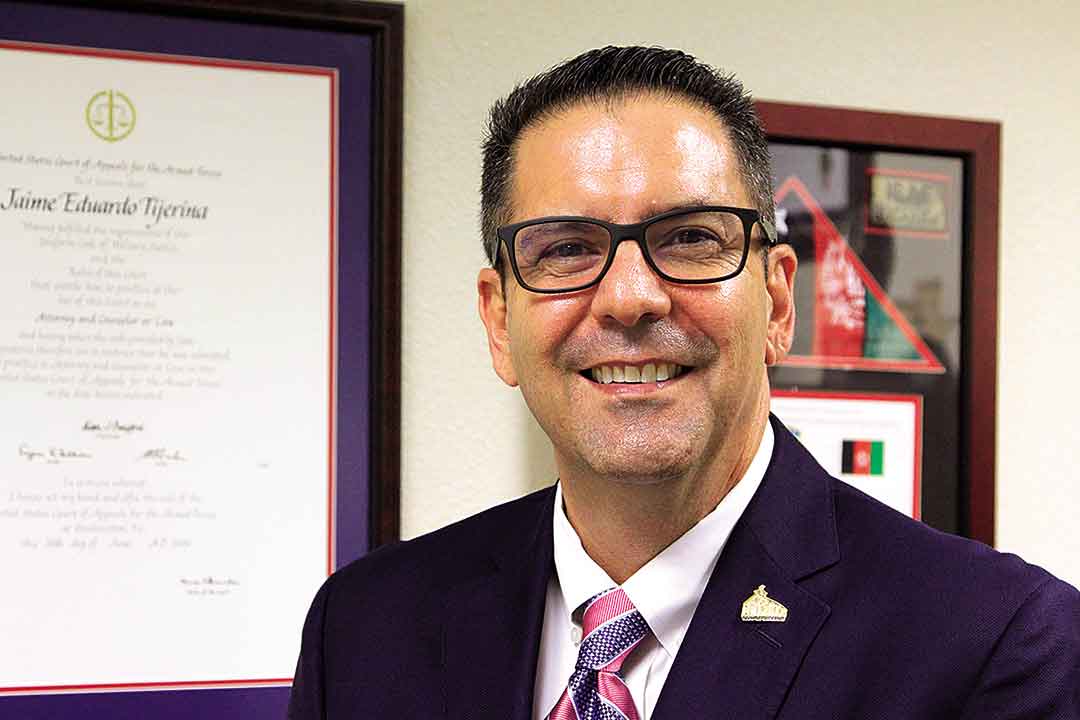 “And I said to my friend, ‘We were driving with the attackers.’ Because as soon as we drove in their car stopped, the guys ran out and all kinds of things exploded,” Tijerina said. Fortunately, Tijerina and his companion were in an area protected by Afghan police “so we just hunkered down in there and waited until it was over.”

In another incident two U.S. Army officers were shot in the head by an Afghan insurgent in an area Tijerina frequented. And in yet another instance Tijerina said an Afghan insurgent crashed a vehicle through the front gate of another compound detonating an improvised explosive device one week after he had been reassigned from the location.

“So to me everything was about timing. I was just lucky,” he said.

In his office Tuesday at Mission City Hall the deputy city attorney said timing had a lot to do with his decision to announce his candidacy for the Place 4 seat of Texas Court of Appeal’s 13th District. The seat is currently held by Justice Nelda Vidaurri-Rodriguez who will not seek reelection when her term ends on Dec. 31, 2018.

The 13th District serves 20 counties from Corpus Christi to Edinburg including Hidalgo County. It’s comprised of a chief justice and five justices with intermediate appellate jurisdiction in both civil and criminal cases appealed from lower courts except writs of habeus corpus and where the death penalty has been imposed. Four of the places on the court including the chief justice spot are up for grabs in the 2018 election.

In November Tijerina will have served in the U.S. Army Reserves for 30 years having worked his way through the ranks from enlistee to becoming an officer in 1991. After obtaining his law degree from Houston’s Texas Southern University he became a staff judge advocate, or military lawyer, in 1998 where he remains in the reserves as a lieutenant colonel.

Tijerina served 12 years as Kennedy County Attorney beginning in 2001 before leaving office for private practice. In 2013 he was appointed by then-Gov. Rick Perry to fill a seat on the Hidalgo County District Court vacated when Ricardo Rodriguez ran for Hidalgo County District Attorney. In 2014 Tijerina, a Republican, lost to Democrat Luis M. Singleterry in an unsuccessful bid to keep his seat. Singleterry remains in office today..

“It’s very difficult for a Republican to win in the Valley,” Tijerina said Tuesday. “You can spend a lot of money or a little money and the results will be the same.”

Calling it a “statistical phenomenon,” Tijerina said it has come to his attention that Republicans running for the 13th District Court of Appeals have a better chance in election years when the governor’s office is at stake.

“In a presidential [election] cycle a Republican will get beat by about eight percentage points, some more,” Tijerina said. “In a governor’s cycle it’s more or less a toss up. And actually, if a Republican spends money it works in their favor.”

As an example Tijerina cited the 2014 race for a seat in the 13th District between incumbent Democratic Judge Dori Contreras Garza and Republican challenger Doug Norman.

“In the last governor’s cycle he spent a whopping $7,500 and he still got 49-percent of the vote,” Tijerina said. “Really it’s been a missed opportunity for Republicans to run in the governor’s cycle because we just haven’t done it.”

With the governor’s office up for grabs in 2018, Tijerina believes now is the time to run.

‘’I’m running now because it’s a completely winnable seat,” said Tijerina. “In fact I think it’s ours to lose.”

Tijerina, who is married to the former Diane Galik and father to three daughters, wants to instill a sense of confidence in the public’s mind about their elected officials.

Tijerina said he was inspired by an opinion piece he read authored by the president of the Texas Bar Association, Frank Stevenson, in which Stevenson said lawyers need to set the standard for integrity.

“So we really need to take the perception fight to the people and that is by being a good example; by getting out to the public, showing people what we are doing and not just trying to get a job in the public sector.”

The primary election is March 6, 2018. As yet no other Republican have announced their candidacy.