Though they were not listed as agenda items, Mission’s city council received an ear full of dueling opinions on President Trump’s call for a wall along the U.S. border with Mexico. And others spoke in support of the mayor’s call to put to a public vote whether to build a new $150 million county courthouse.

The public’s interest was precipitated by public statements Mayor Norberto “Beto” Salinas made in the last two weeks.  The first were published April 24 in the Washington Post. He was quoted saying Mission residents living along the Rio Grande River were afraid because of the number of undocumented immigrants crossing into the U.S. on the city’s south side. 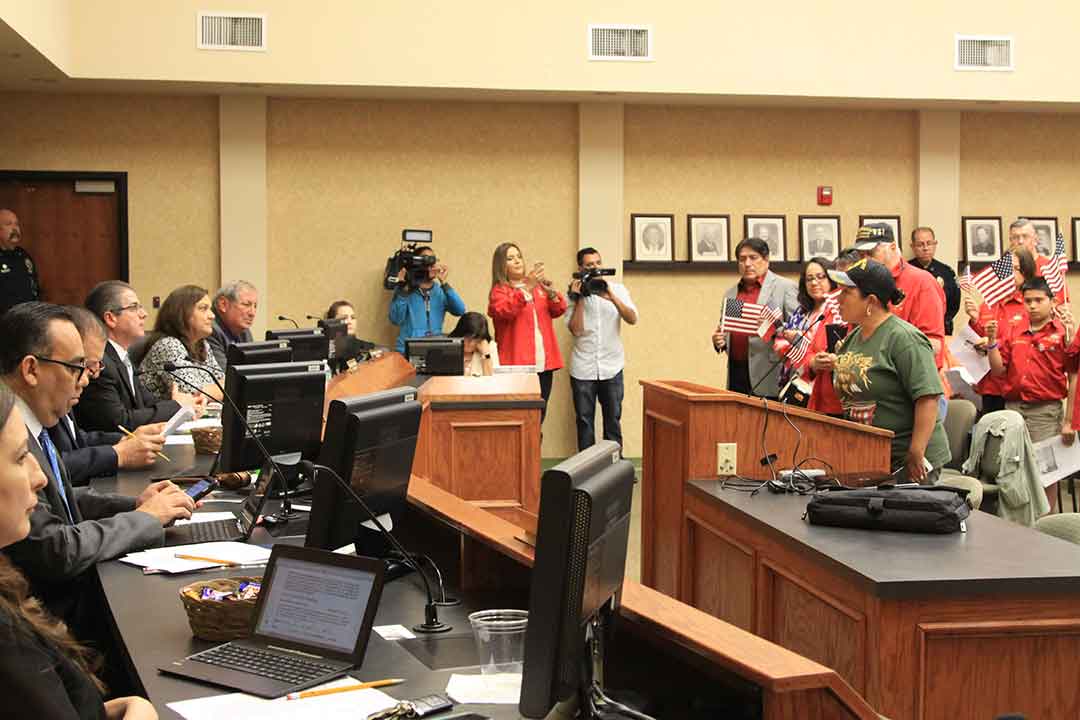 “The best thing that could happen to us is that we go ahead and build the fence and see if we can stop some of the illegals from coming across,” Salinas told a Post reporter.

Salinas’ remarks sparked a backlash from local members of an immigrant rights group founded by the late migrant farm worker activist, Cesar Chavez. John M. Torres, communications coordinator for La Union Del Pueblo, or LUPE, went on local TV news to denounce Salinas’ remarks. He used the platform to announce plans to present the mayor and council with a petition against the wall. The TV  report prompted members of the Objective Watchers of the Legal System to attend Monday’s city council meeting to present their opposing view in support of the border fence.

On Monday, Torres presented the mayor and council with a petition endorsed by 302 area residents opposed to the wall, he said.

Torres provided a letter addressed to the mayor signed by eight area non-governmental agencies asking Salinas to “take back his hateful and fear mongering comments and join his constituents in vigorously opposing Trump’s border wall.”

Torres told the mayor and council many residents could not imagine seeing the Rio Grande River fenced off at Bentsen State Park, La Lomita Mission or the World Birding Center.

“The idea that these spaces might be walled off by Trump’s border wall is something that cuts really deep for Mission residents and for that reason many people were motivated to sign the petition,” Torres said.

Torres said he would be asking for an opportunity to meet privately with the mayor and each council member in hopes of swaying their opinion and to support a resolution against the wall similar to one recently passed by the Hidalgo County Commissioner’s Court.

Jim Barnes, a member of Objective Watchers of the Legal System and president of the McAllen Tea Party spoke in support of the wall.

“Aliens who cross our border without permission do not share our values of rule of law,” Barnes said. “As illegal aliens they deserve to be arrested, deported and imprisoned. If a border wall, physical or virtual, prevents illegals from crossing then we should build it.”

Lupita M. Perez, an Iraq war veteran and commander of Veterans of Foreign Wars District 18, Post 7473 also spoke in favor of a wall and against illegal immigration.

“We don’t know what’s coming into our country so we make everybody check in. And if they want to stay they can check in permanently by doing it the right way,” Perez said. “And I think that’s not too much to ask of our citizens so that we can get this wall built.”

Several more persons spoke for and against the wall.

Also precipitating public comments Monday was a half-page advertisement Salinas purchased in the May 7 edition of The Monitor newspaper urging the Hidalgo County Commissioner’s Court to place funding for the proposed $150 million county courthouse before voters. Salinas said residents should be allowed to vote on the matter because they’re the ones who will experience increased taxes to pay for it.

O.W.L.S. member Fern McClaugherty spoke in support of the mayor’s proposal saying judges can make do with the existing courthouse.

McClaugherty said she hoped Hidalgo County residents will have the opportunity to vote on the new courthouse “because we are paying for it.”

Another O.W.L.S. member, Mission resident, Charles Vanraden, told the council the current courthouse is  “under used and inefficiently used.” He asked the council to pass a resolution requesting the Hidalgo County Commissioner’s Court to put the issue before voters.

Noting the issues were not even on the council’s agenda Salinas said they may be considered at a future meeting.

In other business Monday, the council approved a zoning change that will allow a developer to construct approximately 60 townhouses on just over two acres of land located a quarter mile north of Expressway 83 on the west side of Glasscock  Road. The council gave approval for another developer to divide current commercial space located in the Stewart Plaza at Expressway 83 and Stewart Road into 17 separate commercial spaces.

City Planning Director Jaime Acevedo said there have been several unsuccessful businesses at the site including a one-time Chinese Restaurant. He said the developer hopes the area will become more vibrant with more retail outlets available to consumers.

The council gave approval for the Speer Memorial Library to use nearly $400,000 provided by Hidalgo County to provide electronic books and magazines to library patrons. City Librarian Mayra Rocha said the funding will make available to library card holders about 30,000 Ebook titles, 60 magazine subscriptions as well as comic books and graphic novels.

The council gave Mission Police Chief Robert Dominguez authorization to spend $193,430 on 158 police body cameras. Dominguez said $152,889 of the amount will be paid with a grant from the governor’s office with the remaining $40,540 to be paid from the Federal Drug Forfeiture account.

And the council gave its approval for city staff to enter into an intergovernmental agreement with the cities of Hidalgo and McAllen to begin the process of acquiring property for the proposed Madero Bridge project that would create another vehicular bridge to Mexico upstream from the current Anzalduas Bridge.