Having outspent their opponents by a three-to-one margin, a trio of candidates running under the unified slate, “Sull1van,” has defeated the city’s incumbent mayor, a city commissioner and one newcomer challenger. 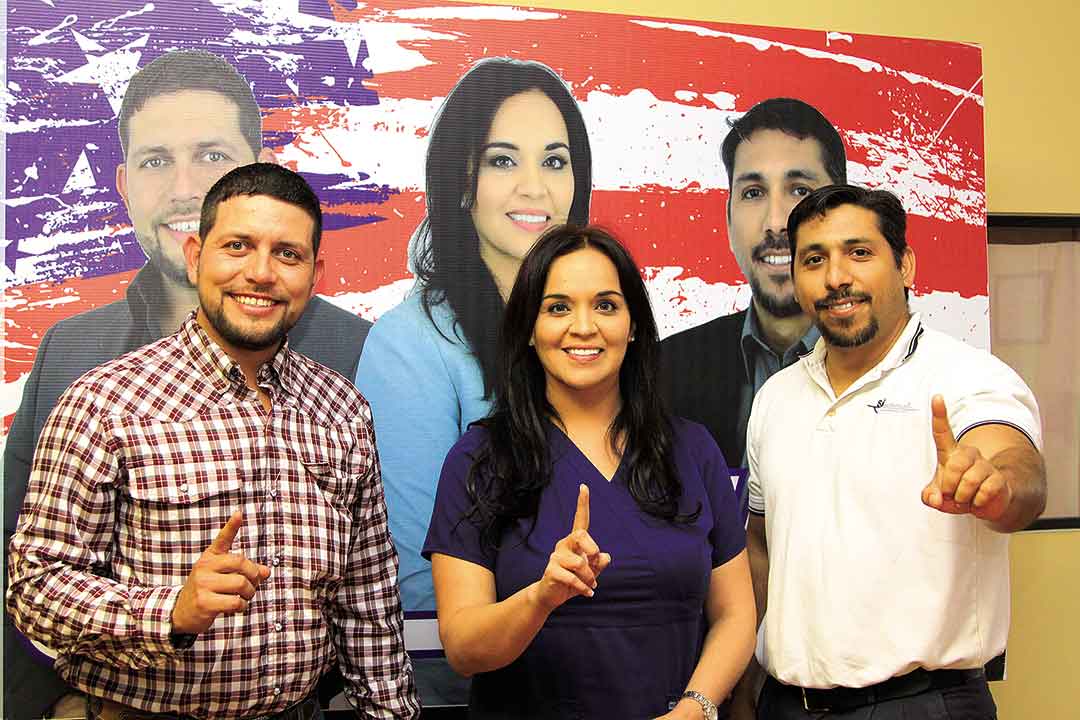 On April 19 a confident group of candidates running under the unified slate of “Sull1van” posed in front of one of their campaign posters following a pre-election interview. They are Mayor-elect, Leonel “Leo” Garcia, Sylvia Castillo, Place 1-elect and Gabriel Salinas, Place 3-elect. Progress Times photo by Joe Hinton

Peña, 31, was defeated by nurse and businesswoman, Sylvia Castillo, 41, in their race for the Place 1 seat on the city commission. The Place 1 seat became available when Garcia decided to run for mayor. Castillo received 62 percent of the 1,137 ballots cast.

In all, 1,147 or 69 percent of the registered voters in the city cast ballots in the election, according to the Hidalgo County Elections Office.

The three Sullivan City Moving Forward candidates utilized a slate campaign fund that raised $10,690 from which $5,109.10 was spent, according to campaign finance reports provided by the city for the periods beginning March 8, 2017 and ending April 28.

Garcia was the only individual candidate to raise and spend campaign contributions in the race. He was midway through his second term on the city commission when he decided to run for mayor. He raised $14,250 and spent $15,924.58 according to his campaign finance reports for the period from Jan. 1, 2017 through April 26. Some of Garcia’s largest contributions included a $1,000 contribution from the Austin-based law firm of Linebarger, Goggan, Blair & Sampson, which Garcia said was Sullivan City’s tax collector. State Representative Oscar Longoria also contributed $1,000 to Garcia’s campaign. Garcia said once elected, Longoria pledged to help the Sull1van slate obtain funding for infrastructure projects. Garcia said the slate also includes city commissioner, Adriana Rodriguez, who is also his aunt.

Garcia received a $2,000 contribution from Everado Villareal, who operates a Farmer’s Insurance office in Mission.

Garza ran with LJISD Board President Oscar “Coach” Salinas and Claudia Ochoa under the “Team L1berty” slate in the Nov. 8, 2016 school board election, all three of whom won and whose slate outspent their competition by a four-to-one margin.

Though not a Liberty Executive Committee member “Coach” Salinas was present when the Progress Times conducted its April 19 interviews with the Sull1van slate of candidates held at the adult daycare center owned and operated by Castillo. The La Joya school board president is married to Gabriel Salinas’ older sister, Alma, both Salinases said.

Prior to the election Benavides said he felt “somewhat betrayed,” by Garcia’s decision to run against him. Benavides said the Sull1van slate was evidence the same people who dominate the La Joya School Board were attempting to influence not only the Agua Special Utility District but Sullivan City as well. Benavides said Sullivan City’s commission passed a resolution in support of Texas Senate Bill 814 that seeks to prevent La Joya school board members from serving on the Agua SUD board of trustees. The utility provides sewer and water services to residents in western Hidalgo County. The bill’s sponsor State Sen. Juan “Chuy” Hinojosa said the bill is necessary to negate the undue influence the La Joya ISD board has on the utility which the senator believes is fraught with conflicts of interest.

In a pre-election interview, Garcia said he voted against the legislation because he didn’t have enough information about the bill at the time of the vote. But he said he was against the bill because he did not want to set a precedent of state government intervening in local community control. He also believed such a bill negates voter choice.

Prior to the election, Garcia said the Sull1van slate was not aligned with the La Joya School or Agua SUD governing boards but were working with numerous communities in Western Hidalgo County on planned, sustained growth in the area. Garcia said he and his slate members have been influenced by the successful management of the mayors of Peñitas, La Joya, Palmview and Hidalgo.

“The only influence La Joya ISD has on the city of Sullivan City, the similarities that we have, which are our kids,” Garcia said. “Other than that they have no influence on any one of us. And La Joya’s priority, and everyone’s priority at this point, would be our kids.”

Neither the mayor nor the four city commissioners are paid for their service.

According to the U.S. Census Bureau, the city’s population was estimated at about 4,200 in 2015. But Benavides believes the number is more than 5,000 because of the number of undocumented immigrants living within city limits he said would not have cooperated with census takers. The major employers in the city are the La Joya school district and Hidalgo County, Garcia said.

Benavides said the city’s annual budget is approximately a half-million dollars. According to the Census Bureau, in 2015 the city had 379 businesses and about 1,300 housing units.  The city has a fire department comprised of approximately 15 unpaid volunteers with two engines and one brush truck, Benavides said.

“Right now we’re not focused on anything else but the city,” Garcia said.