The ceremony, which filled the cafeteria of Sam Fordyce Elementary School, occurred 12 days after then-mayoral candidate, Leonel “Leo” Garcia, was temporarily detained by federal agents during the arrest of Garcia’s childhood friend and one-time business partner, Lombardo Bazan, of Mission, for an alleged federal weapons violation. 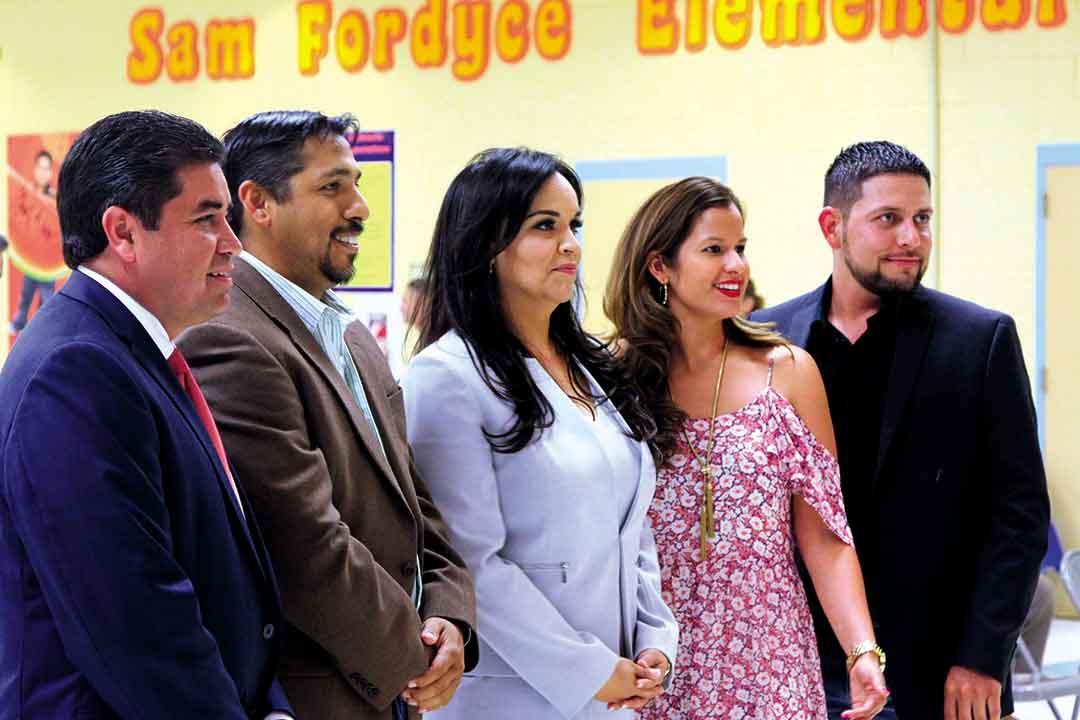 On May 6, Garcia defeated two-term incumbent Mayor Rosendo Benavidez and Salinas defeated incumbent commissioner Joel Flores for the Place 3 seat on the commission. Castillo defeated political newcomer Rene Peña, both of whom were vying for the Place 1 commission seat Garcia held until deciding to run for mayor.

Following the ceremony Rodriguez, who told the crowd his family is from Sullivan City, gave words of encouragement to the city’s administration.

“My advice to the commissioners and the city manager is that you try to do your best for your people because they give you the opportunity to serve the people of Sullivan,” Rodriguez said. “I ask that you serve them with the utmost respect, you serve them with honesty and with the greatest integrity.”

The swearing in ceremony included several occasions of hearty and raucous applause especially after the canvas of votes was read confirming the three candidates’ election to office. As one of its first orders of business the commission elected Garcia’s aunt and city commissioner, Adrianna Rodriguez, as mayor pro tem.

The ceremony follows a May 4 incident in which agents with the U.S. Bureau of Alcohol, Tobacco, Firearms and Explosives briefly detained Garcia because he was riding in the same vehicle with Bazan when ATF agents arrested Bazan.

Bazan was booked into the Hidalgo County jail and subsequently indicted on two counts of making false statements on federal firearms forms. Bazan has been accused of enlisting two other men to make so-called “straw purchases” of four handguns. The ATF investigation of Bazan began in January 2016 when 16 handguns and 2,000 rounds of ammunition were found in the spare tire of a pickup truck driven by a man authorities identified as Joseph Gonzalez. According to Bazan’s indictment and criminal complaint, two conspirators told investigators Bazan had given them money to purchase four of the pistols found in Gonzalez’s pickup truck.

Garcia is employed by the La Joya Independent School District and works in its Transportation Department. According to his March 2014 job application, Garcia listed Bazan as a partner in Empire Hauling from January 2010 through January 2014.

No mention of the May 4 incident was made at Tuesday night’s event. In a published report Garcia and Garza both said they had no knowledge of Bazan’s alleged illegal activity. Attempts to speak with Salinas about his relationship with Bazan were unsuccessful as of press time.