The first ever sighting of an Audobon’s Oriole at the National Butterfly Center was recently recorded during a regional bird watching competition on Mission’s south side.

It’s called the Big Sit! And it is just one of the many birding competitions that make up Texas Parks and Wildlife’s Great Texas Birding Classic. 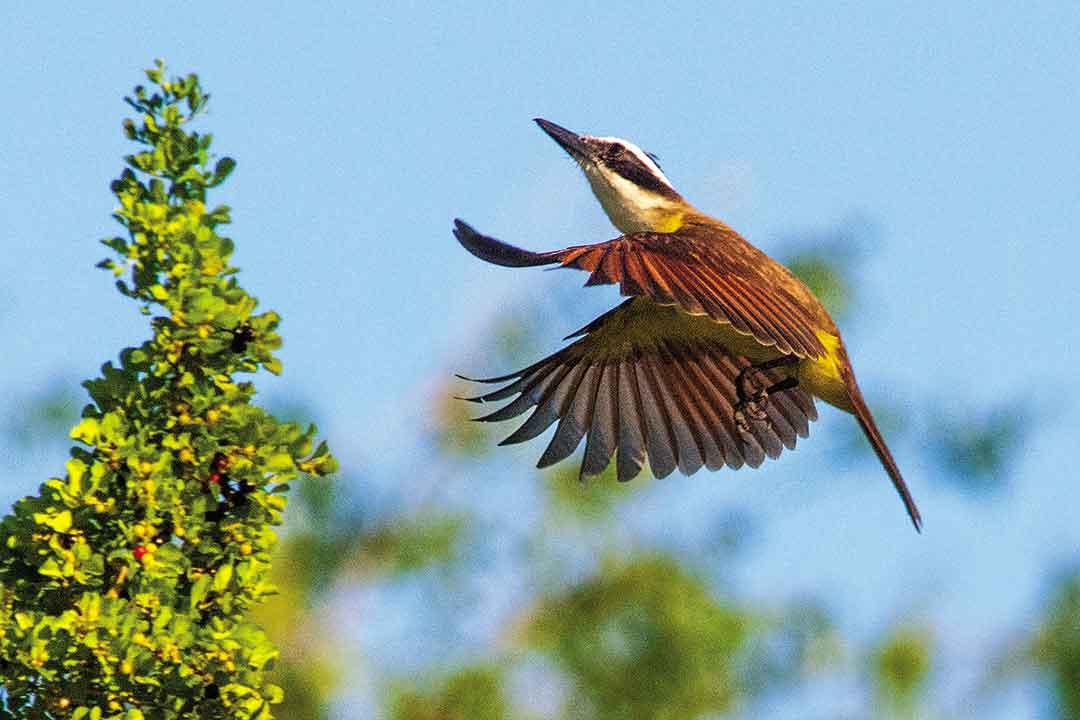 The Great Kiskadee is one of the 82 species of birds that members of the National Butterfly Center’s Double Stuffed Orioles birding team were able to identify by sight and/or sound during their Big Sit! day. Photo by Luciano Guerra

In the competition teams of birders have from April 15 to May 15 to select a day in which they will ‘bird’ from within a 17-foot diameter circle. They then have up to 24 hours in a single day, from midnight to midnight, to count as many birds as they can identify by sight or  sound. Team members can rotate in shifts or can be the same members all day. Birds identified must be seen or heard from within the circle to be counted.

The National Butterfly Center’s team, which went by the name of the Double Stuffed Orioles, chose Saturday, May 6 as their Big Sit! day. The ten member team birded in shifts with the first shift beginning at 5:30 a.m. and the last shift ending at 9 p.m.

The early start and late finish meant that some birding was done in the dark. That was by design as there are many species of birds, such as owls and nighthawks that are nocturnal and usually just seen or heard at night.

As is almost always the case with this type of birding competition, it’s the early morning shift that gets to count the most species of birds. In the Double Stuffed Orioles’ case, the first shift made up of Gustafson, William, Wilson and Carey, identified 64 different species of birds from within their circle. That was quite an accomplishment when one takes into account that last year, the National Butterfly Center’s Big Sit! team, had a total count of 68 species.

“It was the bird of controversy of the day because no one got pictures of it,” said Marianna Wright, executive officer of the National Butterfly Center. Wright said the Oriole was seen by two of the birders, one a relative newcomer and the second a seasoned veteran.

“So we’re going with the honor system because they have been seen in this area just not recorded at the Butterfly Center before,” Wright said, adding all sightings are recorded with EBird at Cornell University’s Ornithology Lab.

Other notable birds recorded May 6 were a Barn Owl, a Roseate Spoonbill, a House Wren, a Rose-breasted Grosbeak, a Yellow-billed Cuckoo and several Groove-billed Anis.

Will the team’s total of 82 species be enough to win the regional Big Sit! tournament made up of teams from the South Padre Island Birding Center, Resaca de la Palma State Park, Estero Llano Grande State Park, Quinta Mazatlan and the Edinburg Scenic Wetlands? Realistically, that is extremely doubtful. However it should be enough to avoid having the National Butterfly Center’s team finish in last place this year as they have the past two years.

While there is no shame in a butterfly center losing a birding competition to several birding centers, the Double Stuffed Orioles’ hard work and dedication from within that 17-foot circle this year should be enough to move them ahead of one or more of their competitors and give the National Butterfly Center its best ever Big Sit! finish.

Wright said the winners will be announced at separate award’s ceremonies June 3 in Houston and San Antonio.