Perhaps no one knew better the 409 members of the Mission High School graduating class of 2017 than principal Edilberto Flores, who for some students had been their top administrator since they entered Kenneth White Junior High School seven years earlier.

To those among that group Flores said during June 2 graduation ceremonies at the McAllen Convention Center,  “Forever in my heart you will be a special graduating class. Thank you for the honor and the privilege.” 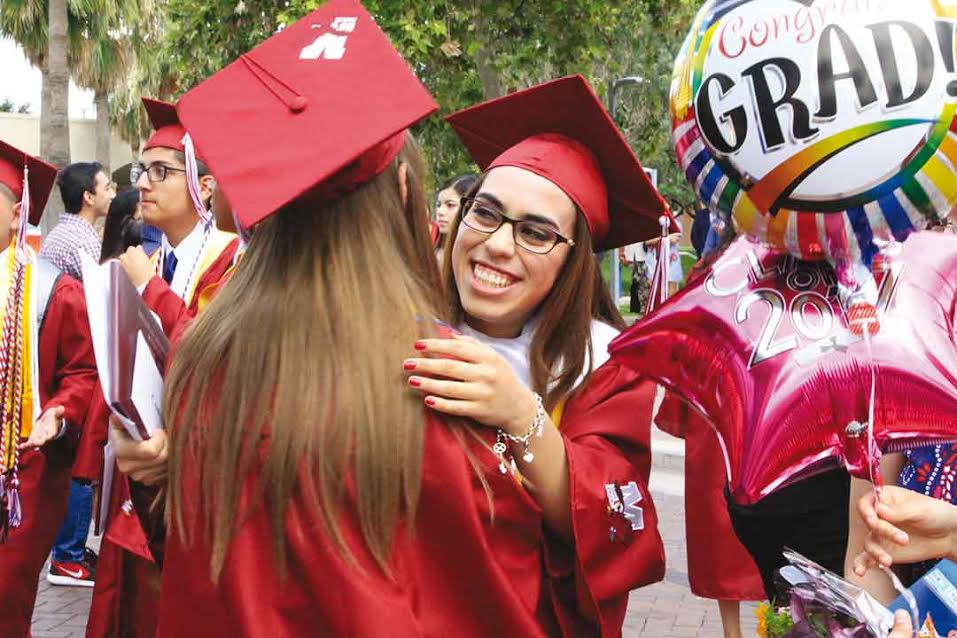 Flores drew laughter from the several thousand in attendance when he referred to the graduating class as the “class of construction,” referring to the $33 million renovation and new construction project at the high school that has been years in the making with an anticipated completion date near the end of this year. Flores acknowledged the graduating class had to endure parking substantial distances from campus and walking to class as construction had disrupted normal parking and traffic patterns around the campus.

During his remarks, Flores recognized three students who, besides their high school graduation, had already graduated from South Texas College where they received associate’s degrees. They were Samantha Reyna, Samantha Banda and Juan Rodriguez, the latter two receiving their degrees in science and engineering and the former in arts and interdisciplinary studies.

Mission Consolidated Independent School District Superintendent Dr. Ricardo Lopez congratulated the graduates and urged them to graduate from college and reverse the fact Hispanics have the lowest college graduation rates among minorities in the nation.

Lopez recognized a trio of students for their unique achievements. Among them  was Melissa Molina, who Lopez noted was graduating in the top ten percent of her class despite entering the Class of 2017 as a non-English speaker.

Lopez also recognized Luisangel Venegas who, after losing family support, started his own cell phone repair business to support himself while he completed high school. And Lopez recognized Esdras Ortiz for overcoming personal obstacles to graduate, saying the young man had perhaps surprised even himself that he was among the graduating class.

Among the proud parents in the crowd were Frank Aniceto Jr. and his wife, Adriana, the father and step-mother of Jose “Jo Jo” Rafael Aniceto who graduated with honors. Aniceto said he felt “ecstatic” for his son. Though he and Jose’s mother divorced when Jose was 2 years old, Aniceto said he has never let that interfere with his relationship with his son who will study finance at Texas A&M – Corpus Christi in the fall.

“No one could ever be as proud as seeing your child graduate,” Aniceto said. “I’m just thankful to the good Lord above his mother and I could come together for him as he’s been growing up.”

Aniceto’s stepmother said she was also proud of the child she has watched grow up the past 15 years.

Following the ceremony, father and son shared a long embrace near the water fountains in front of the convention center where graduates exited following the ceremony and reunited with friends and families. That’s where graduate Andrea Gonzalez stood searching for her family with two medallions around her neck. One medallion commemorates her alma mater and was provided to each graduate by the board of trustees and another commemorates her academic scholarship by the state of Texas.

Gonzalez, who plans to attend the University of Houston in Victoria in the fall said she was relieved high school was over but was not overly apprehensive about at least another four years of schooling.

During the ceremony, class valedictorian Edgar A. Garza thanked his principal, school staff, the superintendant and board of trustees for making the day possible.

“Having all of us here preparing to begin the next chapter of our lives would not be possible without the great leadership everyone of you exhibit,” Garza said.

And Salutatorian Roxanna Cortez ended her remarks with advice for her fellow graduates.

“If I can leave you guys with one piece of motivation this afternoon, it would be that no dream is too big. Just because your life is not perfect, it does not mean that you cannot do it. Come on Class of 2017, go out and change the world.”