Mario’s Banquet and Conference Center in Mission was the place and the 2017 All-Valley Sports Awards Banquet was the occasion as the best-of-the-best high school athletes from across the Rio Grande Valley were honored Saturday evening for excelling in their respective chosen sports. In total, 99 athletes, 12 teams, six coaches and six programs from 22 school districts and 33 high schools were nominated for 33 different awards.

Of the 15 individual athletes nominated from the seven Mission, Sharyland and La Joya high schools, six walked away with seven of the 24 highly coveted individual awards. In addition, one Big 7 team received a Best Team award. 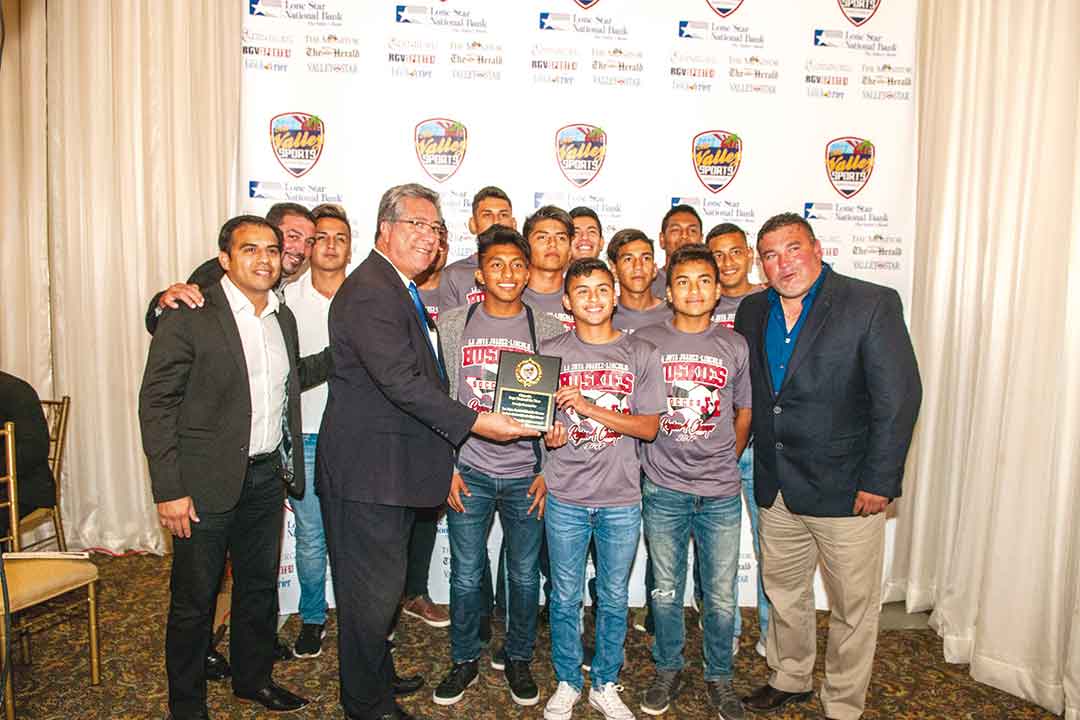 The Juarez-Lincoln High School boys soccer team was named the Class 6A Boys Team of the Year at the 2017 All-Valley Sports Awards Banquet.
Progress Times photo by Luciano Guerra

Before the awards were handed out however, former NBA player and 7-time NBA champion Robert Horry gave the keynote speech. While he covered many topics, Horry stressed the importance of having more than one option when planning for the future.

“I always thought I’d go into teaching,” Horry shared. “However, everybody kept telling me that I was a good enough basketball player to get a free ride through college and that I needed to pursue that possibility. As it turns out, they were right and while playing basketball was my Plan B, that is what I ended up doing. That goes to prove that sometimes Plan Bs can turn out to be the best plans.”

The first Big 7 athlete to receive an award Saturday evening was also one of the two athletes nominated in two different categories. Palmview High School’s Brianna Robles was named Girls Cross Country Athlete of the Year. Robles, who made program history by becoming the first Lady Lobo to qualify for the UIL Class 6A state meet, was also nominated as Girls Track and Field Athlete of the Year. However, she did not win that award.

When asked what being named the Girls Cross Country Athlete of the Year means to her, Robles said, “It means a lot. It means that all my hard work paid off in the end.”

As for who she credits for helping her attain such a high level of success in both Cross Country and Track and Field, Robles named her father.

“My Dad, Joe Robles, was a runner too. He taught me and he helped me along the way. He would correct me on the little things that I needed to improve on in order to get better.”

The second Big 7 athlete to receive an award on the night was the other athlete nominated in two different categories. However, unlike Robles, Mission Veterans Memorial’s Diego Hernandez won both of his awards; Football Player of the Year and Sub 6A Male Athlete of the Year.

While Hernandez has received many honors and awards over his high school career, receiving two of Saturday evening’s biggest awards in this his senior year, gave him an opportunity to recognize those people in his life that helped him the most along the way.

“Each of these awards is a testimony to all the hard work I’ve put in and all the time my parents and my coaches have invested into making me the athlete that I am today,” Hernandez said. “The coaches only want what’s best for you so waking up every morning, going out and doing what they tell you to do is vital. Also, following my parents’ and my brother’s lead is what allowed me to be as successful as I have been and that is a real blessing.”

When asked who he considers to be his mentors, Hernandez said, “Coach Lupe Rodriguez has definitely made me the football player I am today. I wouldn’t be where I am without him. And Coach David Gilpin has helped me to become the man I am today.”

The third Big 7 athlete to receive an award Saturday night was Sharyland High’s Jun Min “Jimmy” Lee who was named Boys Golfer of the Year. In only his sophomore year, Lee led his team to a district 31-5A title and qualified for the state tournament for the second year in a row.

“I’m very honored to receive this award,” Lee said. “It’s a great pleasure to be named as the best boys golfer in the Valley.”

When asked what goals he has for next year, Lee said, “My goal is to win the big three; district, regional and state. This year I won district, I placed second at regionals and I placed 10th at state so for next year I go win, win, win.”

Mission High’s Guadalupe Rodriguez was selected as the Boys Wrestler of the Year. Rodriguez not only took the gold medal at the UIL Region IV-6A meet but he was named male outstanding wrestler of that meet as well.

“It’s a big honor to be named the top wrestler in the Valley,” Rodriguez shared. “I’d like to thank my parents for always showing me the right paths to go through. I’d also like to thank Coach (David) Mann who’s always taught me to be humble.”

Mission Veterans Memorial’s Noel Vela became the second Patriot athlete to receive an award on the night when he was named the Baseball Player of the Year. Vela, who finished with an 8-1 record to go with his 0.94 ERA and 87 strikeouts on the mound, also posted a .462 batting average with 45 RBIs and two home runs.
Vela, who was nominated but failed to win this same award after his sophomore year, shared what winning it this time around means to him.

“It’s an amazing award knowing that the work I put in is paying off right now,” Vela said. “It means a lot knowing that I’m finishing off my high school career with this award.”

As for who he credits for his success on the baseball diamond, Vela said, “Basically my mentor is Coach Casey Smith. He just got a new coaching job at Pioneer but he’s someone that I look up to because he got me out there, he got me exposure and he did everything in his power to make sure I succeeded.”

The Juarez-Lincoln Huskies boys’ soccer team took the final Big 7 award of the evening when it was named the Class 6A Boys Team of the Year. The 2016-2017 Huskies advanced to the state championship game for the first time in school history where they lost in penalty kicks to Dallas Jesuit. Led by head coach Victor Ramos, the Huskies finished the season with an impressive 30-4-1 record.

“It’s a great honor,” said Ramos about his team’s award. “The kids had a wonderful season. They played tremendously until the end. We got as far as the state championship game but that’s how soccer is. It’s not only about talent, sometimes it’s about luck. The past six years we’ve lost to five state champions so while it hurts a little more this time because we made it to the state level, it was a good experience and we’ll learn from it.”