Granjeno Mayor Yvette Cabrera still remembers that fateful Tuesday night when her city was hit by straight line winds with speeds between 85 and 95 miles per hour, damaging at least 40 homes and the city’s community center building May 31, 2016 .

“I was asleep when all of a sudden it started raining and hailing,” Cabrera recalled. “I walked out of my bedroom to check it out, that’s when I heard a really loud noise against our house followed by glass shattering. The wind from the storm had broken all our windows and rain was getting everywhere.” 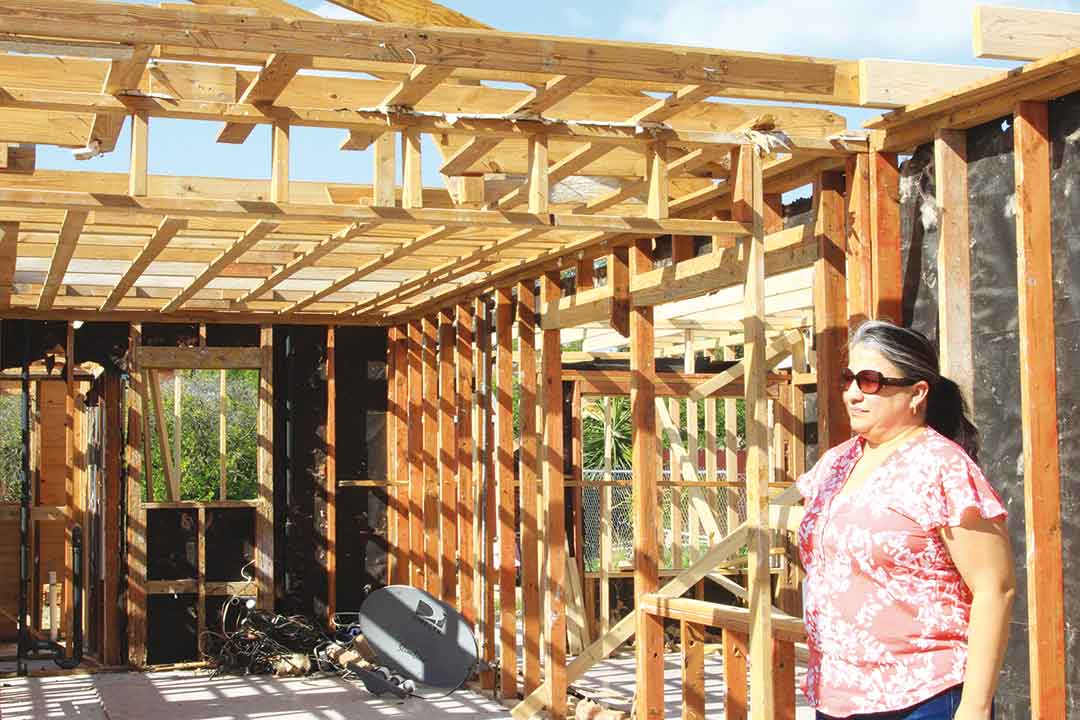 Granjeno Mayor Yvette Cabrera stands inside her home that is being reconstructed after it was destroyed in a storm last year that damaged nearly 40 other homes in her city. Progress Times photo by Jose De Leon III

Cabrera said the winds awakened her two daughters who were screaming in terror from the violent winds that threatened their home. The best Cabrera could do to calm her daughters was wait with them in their room, praying for the storm to pass.

“The storm lasted maybe 30 minutes but it felt longer,” Cabrera said. “I couldn’t even sleep I was worried about what was happening in Granjeno outside my home. It wasn’t until I went to my living room and noticed that our roof had flown off, causing water to drip into the house, did I say to myself ‘I think this is serious.’”

Once the storm passed, Cabrera walked down the street to the city hall to make several phone calls requesting aid from public officials. Along her walk she noticed broken electric power poles and destroyed trees, patio covers and carports along the two streets in her city of 313 residents. Large sections of rooftops had their shingles stripped away and some homes had power poles or trees resting on the rooftops as downed electrical wires lay strewn on the ground.

“I couldn’t even drive around because of the down power lines,” Cabrera said. “We went through a lot that day, it was the first time we’ve ever experienced something like this. It was a learning experience; we were all out there trying to do our best with what we had.”

Arcadio Anzaldua, Cabrera’s neighbor, was also impacted by the storm. All the shingles on his roof were blown away, causing water damage to his ceiling.

He said he considered himself lucky as his house was still standing after storm, but seeing the damage to the city “devastated” him.

“It’s not a nice experience, it totally flips your world upside down. It flipped mine,” Anzalduas said. “Forces of nature, man. We’re lucky it wasn’t worse. I wouldn’t want it to happen again.”

Delayed projects
With Cabrera’s home destroyed, she and her daughters are staying at her mother’s home as her home is rebuilt from scratch, an ongoing process that is costing her $95,000.

The ongoing construction is similar to what the city is facing with two of its projects, the long-gestating city park and the rebuilding of the city’s public facility.

The public facility had been open since 2004 and offered several youth programs such as martial arts classes. However, the storm tore off two walls of the building due to lack of proper support during the initial construction, Cabrera said.

“I remember when I was walking down the city after the storm and seeing how damaged the public facility was and thinking ‘If that’s heavily damaged imagine how bad the homes in the area are,’” Cabrera said, adding that they’re working with the Mission-based engineering firm Hinojosa Engineering to see what the city can do with the center.

“We don’t want this problem to happen again so if we were to rebuild it we’d want to avoid the problems the previous center had,” Cabrera said. “We need to make it sustainable enough to survive another storm like this.”

Cabrera said Hinojosa Engineering will deliver blueprints for a new center later this year so the city can seek construction bids. The firm’s president, Ricardo Hinojosa, did not respond to a request to comment as of press time.

The storm also delayed the city’s park project that was being built next to the public facility. Cabrera said the city held a groundbreaking in April 2016, shortly before the storm. The park, which is being built in three phases, was initially expected to be completed within six months from its groundbreaking, Cabrera said. It was planned to have a walking trail along the perimeter of the park, a children’s play area, restroom facilities and a basketball and volleyball court. Instead, a children’s play area surrounded by tall grass sits next to the destroyed facility center.

“It’s not to be used at this time as we’re still working on it,” Cabrera said of the children’s play area. “We had to wait to resume working on it to get it cleared from the storm but now we’re being delayed by lots of little things like our construction firm not being able to find the proper rock for the walking trail. We can’t even maintain it and cut the grass until after the park’s completed construction.”

Ricardo Saldaña, the Hidalgo County emergency management coordinator, said it’s normal for a city to take a while to recover from a destructive storm such as the one Granjeno encountered.

“I know the city is working with the county on their projects like the facility center but it’s been a slow process for the community itself and some of the residents,” Saldaña said. “The community is still struggling a little. Residents have to be patient since it is a process for things to resume back to normal, it doesn’t happen overnight.”

“The front of our main hall was also completely torn off, that was at least $20,000 in damages,” Burns said in a phone interview Wednesday. “The trailers were damaged in some way but we were completely recovered from the storm within five months, we even had some of our regular residents come down here to help clean up.”

Cabrera hopes her city can also recover from the storm as hurricane season started earlier this month.

“No one wants to be in a situation like this,” she said. “Sometimes when I hear strong winds or storms we get hesitant or scared because of what happened. We’re all handling it differently.”