If approved by Mission’s city council the theater in the round at Leo Peña Placita Park will be replaced with a more traditional outdoor stage setting. Plans to completely refurbish the 2.5 acre park, site of numerous community events including the Texas Citrus Fiesta’s Fun Fair, were unveiled Monday during the council’s annual planning session at City Hall.

Carolina Civarolo, of the McAllen-based Orange Made Architecture, showed proposed plans to the city’s mayor and council that would eliminate the existing center stage and rows of concrete seating surrounding it and replace them with a stage on the west side of the current amphitheater with natural rock seating near the front of the stage with a grassy lawn throughout the remaining seating area where guests can either sit on the grass or lawn chairs.

Above is the proposed plan rendering by Orange Made Architecture for the proposed $1.5 million redesign of Leo Peña Placita Park located at 8th Street and Conway Ave. Courtesy photo. 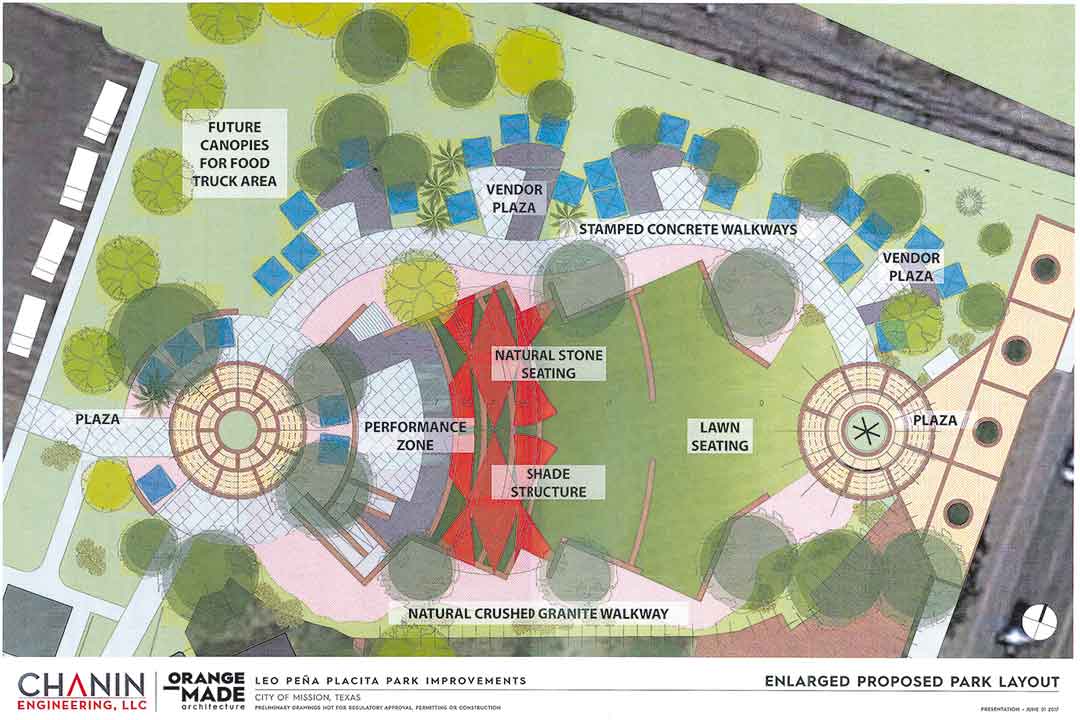 “And now when you have a performance completely to the west everybody is now looking in the same direction,” said Mission City Manager Martin Garza, adding performers have said it is a difficult venue in which to perform because they were always playing with their back to part of the audience at some point in their performance. “So this is going to be a lot easier for them and we’re going to create a real nice entrance on the east side.”

Civarolo said a short wall will divide the grassy open space to discourage its use as a soccer field and will have some sort of shade structure near the stage with the remaining open space shaded by existing trees on the park’s west side.

“The greatest asset to this park right now are the giant trees there,” Civarolo said, adding they shade about half the park in the afternoons when most activities occur.

“If you look at the new facilities out there, most of your parks are creating open space areas for like your lawn chairs or your picnic area,” Garza said. “And this would allow us to create a different atmosphere rather than just your concrete benches here.”

Garza said the renovation is in response to complaints from Winter Texans about the condition of the park with uneven concrete and the difficulty some have negotiating the park. He said the new design adheres to specifications of the American with Disabilities Act.

Garza said the city is looking at an overall $1.5 million renovation project for the park located at 8th Street on the west side of Conway Avenue. He said the project will likely be completed in phases with the first phase utilizing just under $747,000 from federal and local grants.

Civarolo’s plan also calls for moving the La Lomita Mission replica representing the city’s namesake currently located on the corner of the park closet to Conway Avenue. During the meeting some council members objected to completely removing the mission replica. It’s final location will likely be a point of debate at future council meetings.

The plan also calls for removing the park’s gazebo.

“We thought, should we leave it, should we not?” Garza said of the Gazebo. “We just felt we needed a completely new environment there because it was old style so we decided to go ahead and remove it. Because if you look at what we’re using it’s everything that you see in new parks.”

The plan calls for stamped concrete walkways on the north side of the park with pads for vendors and includes new lighting fixtures similar to the ornamental light posts installed along Conway Avenue during the beautification project two years ago.

Garza said the city will have to see what kind of bids come back from potential contractors to determine just how much of Civarolo’s plan can be completed in the first phase. Garza said the first phase should include creating the stage, walkways and other concrete work. He told the Progress Times the mayor and council will use the rest of the summer to finalize what it wants included in the first phase of the project and he anticipates the city will request bids on the project in August or September.

Garza also updated the mayor and council on plans to create a 16-court Mission Tennis Complex at Birdwell Park. Parks and Recreation Department Director Brad Bentsen explained to the mayor and council the city received notice in March it was not awarded the half million dollar-matching grant it requested when it applied to the Texas Parks & Wildlife Department (TPWD) in October, 2016.

Garza said since Valley Baptist Legacy Foundation has agreed to extend the deadline on using its grant until next year the city will wait until it obtains the TPWD grant so the project will not have to be done in phases. That plan will move ground breaking from this summer until April 2018, he said.