Noel Vela’s hard work and dedication on the baseball diamond paid off as the Mission Veterans Memorial High School left-handed pitcher was drafted by the San Diego Padres in the 2017 Major League Baseball Draft last week.

Over his four years, Vela established himself as one of the most dominant pitchers and reliable batters not only in the state of Texas, but across the nation. He was recently named a First Team All-American and brought home the award for Baseball Player of the Year at the RGVSports.com All-Valley Awards. 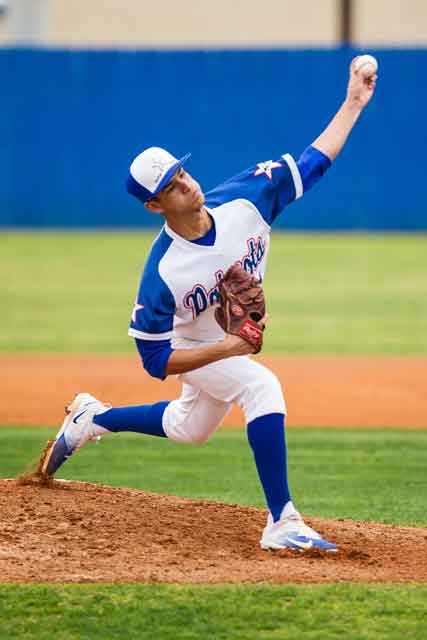 “You could tell he was special and very talented as a freshman,” Smith said. “It was quite obvious and he really blossomed his sophomore year, he became an elite player and you could just see the talent there. I’m really excited for him and proud of him, for him to start the process of working his way, hopefully, up to the major leagues eventually. It’s a long process so I’m excited for him and proud of him as a coach.”

The 6’1” 165 left-hander will begin his professional career in the Arizona Rookie League playing for the Padres organization.

The San Diego Padres identified pitching as strength in this year’s draft and came away feeling good with their additions, General Manager A.J. Preller said in a news conference last week.

“We had mentioned pitching as a potential strength of the draft this year,” Preller said. “The ability to go get some of the pitchers we did, left-handed pitching and catching, and get guys that our scouts liked, guys that from a makeup standpoint I know are going to help us win and help us get better at the big-league level down the road, it’s a good feeling.”

Vela was a part of a talented group at Mission Veterans that won the District 31-5A championship while going 26-6 on the year. The Patriots swept Donna High School in the bi-district round of the playoffs, but fell short in the area round, losing to Calallen in three games.

The left-hander, who spent time at first base when not dealing, finished with a 31-7 record over his dominant high school career with an ERA of 1.34. He also finished with a batting average of .438, 152 RBIs and 10 homeruns.

“This group was amazing. I’ve been here since my freshman year and I’ve learned a lot from guys like Noel; never quit, never back down, always keep coming at them even if we have bad innings.”

Smith said as Vela turns his love and passion for baseball into a career, he will have to continue to grow both on and off the field.

“As far as off the field, he has grown and become a better teammate, a harder worker, and that’s an area that he’ll continue to have to improve upon as he makes this his career,” Smith said. “What I’ve told Noel was by the time he graduates after four years, was he’d be a better person than he was four years ago; I think the talent, in addition to that, has a chance to carry him a long way.”

Vela could not be reached at press time.