Through the blood, sweat and tears shed over the past year, Big 7 athletes worked endlessly to perform at their highest level and created memorable moments along the way. After narrowing down the long list of accomplishments, including district titles, state championship appearances and gold medals from La Joya, Mission and Sharyland ISD athletics, these are the Big 7’s Top Ten Sports Moments of 2016-2017.

#1 Juarez-Lincoln Boys Soccer qualifies for 6A State Tournament
The Huskies and Head Coach Victor Ramos made program history by advancing to the state semifinals for the first time in the school’s nine years. Juarez-Lincoln won their first five playoff games by a combined score of 14-2, beating Edinburg North 1-0 in overtime to make the final four. Junior forwards Gerardo Reyes and Manuel Castrejon were named District 30-6A’s Offensive Player of the Year and Most Valuable Player, while the team earned the All-Valley Award as the 6A Boys Team of the Year. 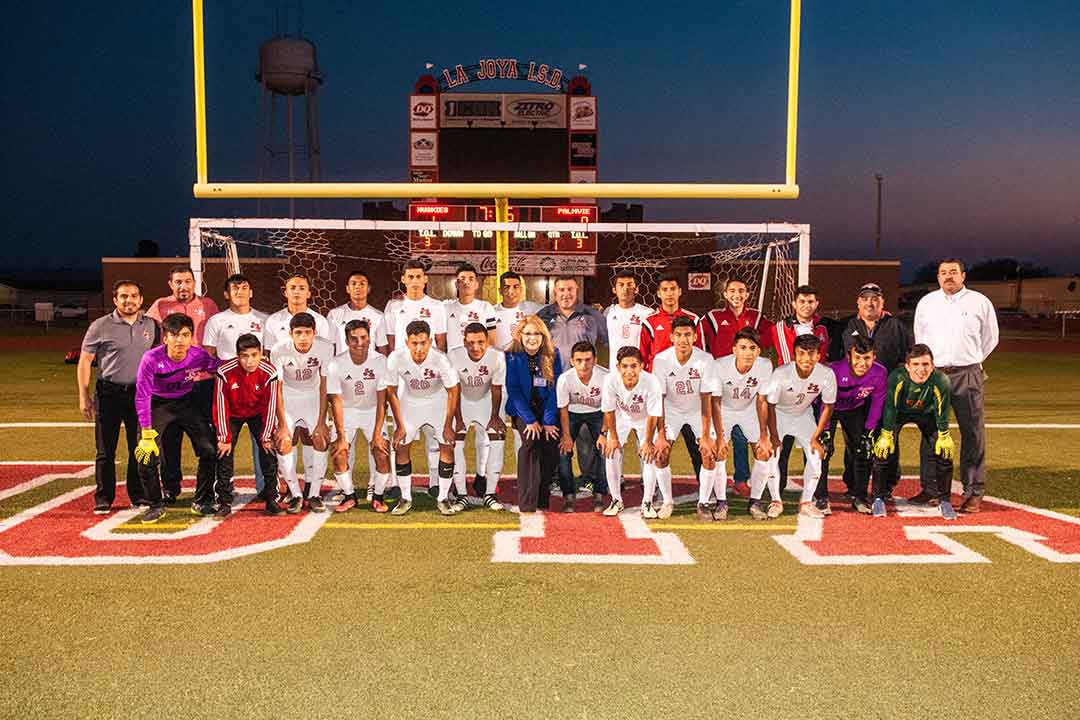 #2 Palmview’s Brianna Robles goes to state meet in two events
Standout long-distance runner Brianna Robles worked her way to the UIL 6A State Track Meet in both the 1600-meter run and 3200-meter run by winning two gold medals at the regional meet. She became the first Lady Lobo to qualify for the state meet and set a personal record in the 1600m (5:04.48) and 3200m (10:55.34). Robles, a junior, was also named the Girls Cross Country All-Valley Athlete of the Year.

#3 Noel Vela drafted by the San Diego Padres
Dominant left-handed pitcher Noel Vela closed his high school career by making program history, becoming the first player from Mission Veterans to be drafted by an MLB team. Vela was the driving force of a strong Patriots team that earned four district titles, finishing his four years with a 31-7 record with an ERA of 1.34. He was also a force at the plate, hitting .438, 152 RBIs and 10 homeruns. Vela was also named the All-Valley Baseball Player of the Year.

#4 Pioneer’s Joaquin Delgado back-to-back state tennis championship matches
The Diamondbacks senior Delgado worked his way back to the state championship match where he brought home a silver medal for the second time. At the state tournament, Delgado won his first two matches in straight sets, 6-3, 6-0 and 7-5, 6-1 to advance to the championship match. Delgado signed to play tennis collegiately at Abilene Christian University in the fall.

#6 Mission Veterans Memorial Football goes three rounds deep
Head Coach David Gilpin and the Patriots accomplished a long-time goal the program had been chasing, reaching the third round of the state playoffs. While the Patriots finished the regular season with a 6-4 regular season record, they played their best ball in the postseason, picking up wins over Brownsville Veterans Memorial (35-14) and Flour Bluff (28-14). Quarterback Diego Hernandez, who was named the All-Valley Football Player of the Year and District 31-5A’s MVP, was a major key to the Patriots advancing to the third round or the first time in school history.

#7 Sharyland Girls and Boys postseason performance
The Sharyland Girls and Boys golf teams were both crowned District 31-5A Champions, while the Lady Rattlers’ placed third at the State UIL Tournament. The Girls Golf Team also finished as Region-IV Runner-Up and ended the year ranked the number one girls golf team in the Valley. Sophomore Jimmy Lee advanced to the 5A State Tournament as an individual for the second year in a row where he finished tied for 10th place.

#9 Pioneer Softball dominates in back-to-back years
The Lady Diamondbacks dominated the softball diamond in District 31-5A for the second year in a row, finishing the regular season 16-0 after last year’s team went unbeaten with a record of 12-0. In a new nine-team district, Head Coach Orlando Garcia and his District Championship squad was led by seniors Mariah Youngblood, Karina Lopez, Emily Michki, Arlene Smith and Ashley Briseno.

#10 Veterans Memorial Volleyball finishes perfect in district
In their first year together, the Lady Patriots and Head Coach Martina Carrillo rolled over opponents in District 31-5A, finishing league play with a perfect 16-0 record. Senior Alexandria earned a share of the 31-5A Most Valuable Player honors with Sharyland’s Caleigh Hausenfluck. Lady Patriots Andrea De la Garza, Illiana Contreras and Makenzie Gerlach each earned First Team All-District Honors, while Carrillo was named the District 31-5A Coach of the Year.