Ask Mission’s Deputy City Manager Aida Lerma and she will tell you the temporary home the city opened Monday with an official ribbon cutting ceremony is the only one of its kind in the Rio Grande Valley.

“I know. I called the other cities. None of them have one,” Lerma said. “If you need temporary residence in the other cities they’re going to refer you to the Salvation Army for their shelter.” 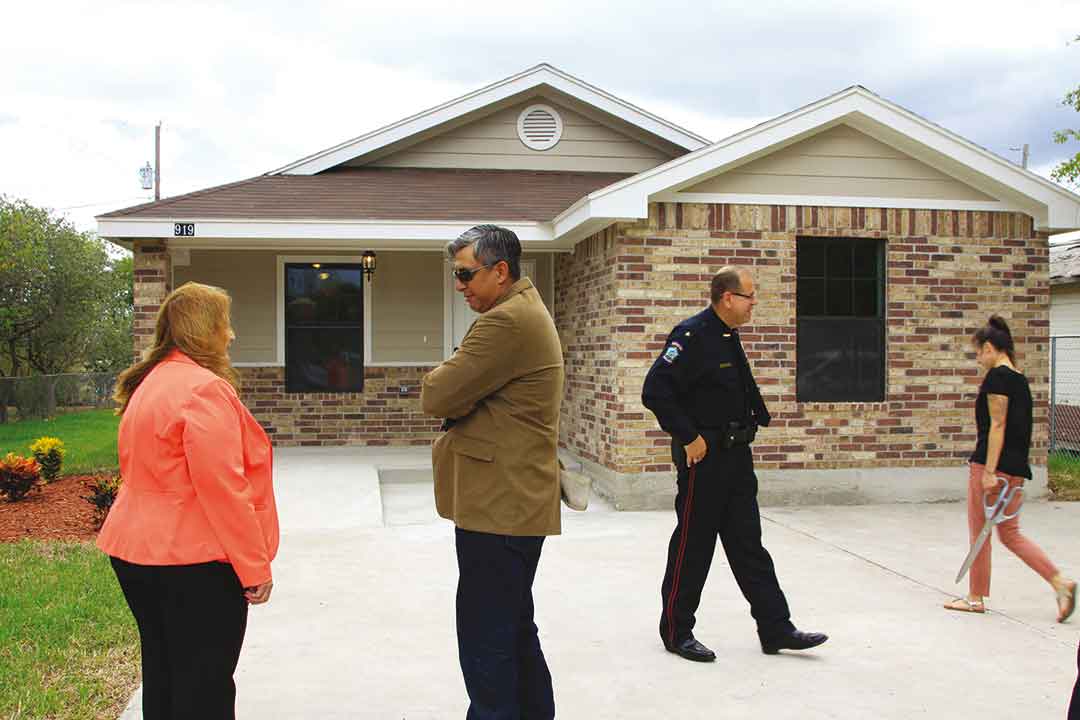 Greater Mission Chamber of Commerce Director of Events and Programs Zoe Molina, right, carries an oversized pair of scissors which at the time, Monday afternoon, would soon be used in a ribbon cutting ceremony for the opening of the city’s second temporary emergency shelter. In the foreground are the home’s builder, Frank Meza of Tabeza Holdings, LLC of McAllen, talking with Deputy City Manager Aida Lerma. Mission Police Chief Robert Dominguez is also in the photo. Progress Times photo by Joe Hinton

Unlike a shelter, the temporary home allows residents to cook their own in-house meals and even bring their own furniture, if they want to, Lerma said.

Besides victims of fire or other emergencies that could put people out of their home temporarily, the city hopes to use the newly built, two bedroom, two bath home in the 900 block of Rankin Street to temporarily house residents whose homes are being demolished and replaced with newly built structures paid for with federally-funded Community Development Block Grants. It was actually the second such temporary quarters the city has created for distressed families. The first came when the city converted a public works building into temporary housing two years ago, Lerma said.

Each year the city receives just under a million dollars in CBDG money, much of which is spent to either replace or refurbish dilapidated homes of low-income residents.

Approximately 425 Mission residents have had their homes either refurbished or replaced since 1998 using CBDG grants, said Jo Anne Longoria, Mission’s Community Development Director who oversees the city’s $904,000 CDBG budget. Besides providing housing to the economically disadvantaged she said about 10 percent of the CBDG budget goes to public service agencies such as Amigos del Valle, a non-profit that assists low income persons with a focus on the elderly and  the Children’s Advocacy Center, among others. Longoria said each year the city receives requests for about $2 million in services but only receives federal funding to fulfill about half the requests.

The Rankin Street house was donated to the city by the Texas Department of Housing and Community Affairs after foreclosing on the previous owner, Longoria said.

Lerma said the city used $48,300 in general funds to build the structure and another $6,400 to landscape the property. The new landscaping was evidenced by the seams that remain between the rows of sod in the large, green yard, front and back.

Meza said building the home was not a big profit-maker for his company.

“But that’s fine. I think we don’t want to only make money but also provide a service to our local community and make sure we have an opportunity to help others,” Meza said.

Both Mission Mayor Norberto “Beto” Salinas and City Manager Martin Garza said the goal of the temporary residence is to help Mission families in distress.

“This will help keep families together,” Garza said.