A $592,000 storm drainage improvement project in central Mission is about halfway completed, according to the city’s chief engineer.

Mission Engineer Juan P. “J.P.” Terrazas said excavation began about six weeks ago on the project along 11th, 12th and 15th Streets between Perkins and Conway Avenues. The project involves the removal of existing 18-inch pipe and replacing it with 24-inch and 30-inch concrete pipe. It also includes new curb inlets and manholes with a new asphalt overlay. Terrazas said the project was necessary because the undersized drainage pipes were inadequate to stop flooding in the area during heavy rains. 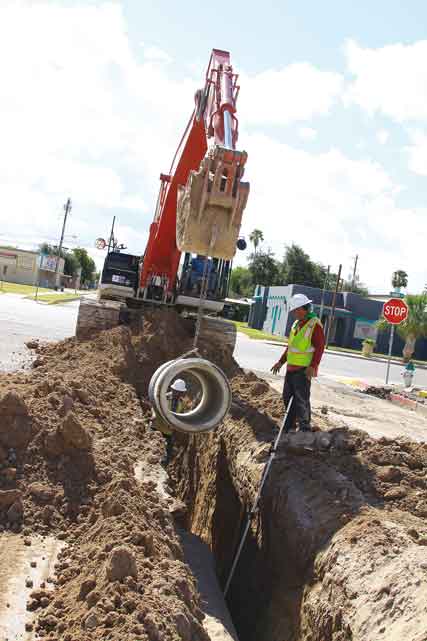 Workers from RDH Site and Concrete, LLC, of Palmview, install a section of 30-inch concrete drainage pipe on 12th Street just west of Conway Avenue Tuesday morning in Mission. The work is part of a half-million dollar project to reduce storm flooding in the area. Progress Time photo by Joe Hinton

The project’s engineer is Javier Hinojosa Engineering of McAllen and the contractor is RDH Site and Concrete, LLC, of Palmview.

The project received start approval on April 17 with an anticipated completion date of September 13.

The final asphalt overlay on the Perkins Avenue area is one of two major overlay projects going on this summer. The city has budgeted just under $550,000 for new asphalt overlay projects according to documents provided to the mayor and city council during a presentation by city staff on the status of ongoing projects in the city that occurred earlier this month.

The overlay projects scheduled for this summer calls for new asphalt in the Colinas Del Rio Subdivision to include Dalia, Azuzena, Zuley and Aleli Avenues; Azalea and Magnolia Streets and Whiteoak Drive. Other budgeted overlays are planned for Los Ebanos Road from Expressway 83 to Mile 1 South, Mayberry Road from FM 495 (Griffin Parkway) to Mile 2 Road. Overlay is also planned for Fairway Drive between Bryan Road and Highland Park Avenue to include adjustment of all water valves and manholes and restriping of Mayberry Road. Those projects have the same engineer and contractor as the Perkins Avenue area project and are targeted for completion by July 22. Those projects were in the preliminary stages as of Tuesday, Terrazas said.

And the expansion of Inspiration Road from Expressway 83 to 3 Mile Line is approximately a third of the way completed, Terrazas said. The $8 million project will widen the two-lane road to five with a center turn lane with sidewalks on both sides. Originally plans called for sidewalks on just the north side of the road but Terrazas was able to obtain about $93,000 from the Texas Department of Transportation for sidewalks and wheel chair ramps on the south side of the road with the cost to the city of just $927.73 or one percent of the project’s cost. During Monday’s city council meeting Mayor Norberto “Beto” Salinas expressed appreciation for the arrangement.

“I want to commend the staff or whoever’s responsible for getting the extra $100,000 for these sidewalks on the south side with the total cost to the city of only $927, so thank you very much,” Salinas said. The decision to add sidewalks to the south side of Inspiration Road will add an additional 20 days to the project that began in May 2016 and is expected to be completed in July 2018.

Another major road project will widen Taylor Road from Expressway 83 to 2 Mile Line. The cost of the  $25.5 million project is being shared with Hidalgo County and McAllen. Property acquisition for that project is scheduled to commence in December following an environmental assessment. No completion date was contained in the presentation to the council.  Terrazas said Tuesday the Taylor Road improvement project will likely be completed in about five years.