Mission’s Redevelopment Authority has approved the sale of nearly $17-million in bonds to finance the second phase of the installation of water and sewar lines on the city’s south side and to refinance previous bonds at a lower rate. The new water and sewer lines will facilitate the city’s expansion on its southwest side.

On June 28 the MRA’s board of directors approved the sale of $16.99 million in bonds, the majority of which will be used to refinance bonds sold in 2005 and 2009 totaling $10.47 million. Another $5.5 million will be used for the second phase of the installation of water and sewar lines along the Anzalduas Highway. 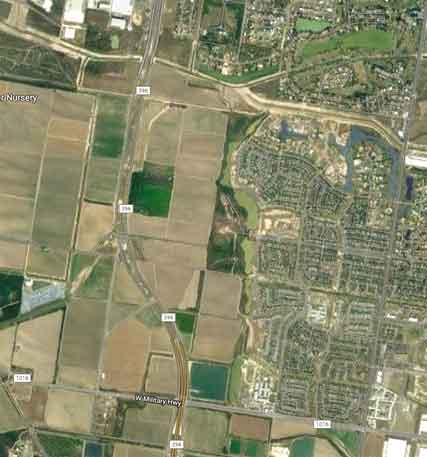 This satellite photo from Google Maps illustrates where future development on Missions southwest side is planned west of Sharyland Plantation seen on the right side of the photo.

As explained by the MRA’s financial advisor Dusty Traylor, the 2017 bonds will reduce the overall payment of the previous bonds by just over a million dollars by the time they mature in September 2030. He said the savings is equivalent to just under $82,000 a year over the life of the bond.

Traylor told the board the refinancing would also reduce the amount required to keep in reserve by about $80,000 per year, which he likened to additional savings as a result of the refinancing.  Under terms of the bond’s provider the equivalent of one year’s payment must be kept in escrow. Traylor said the new bonds were being financed at 3.25 percent. The origial bonds were financed at 5.89 percent, said MRA Executive Director Daniel Silva.

The MRA board also approved spending an additional $15,500 for final right of way purchases for the pipeline bringing the project’s total cost to just under $5 million, Silva said.

Following the meeting Silva said the first phase of the project involved placing lift stations at Los Indios Parkway and Military Road. The second phase invlolves the installation of about two miles of water and sewer lines along the Anzalduas Highway. He said the lines are necessary to facilitate further commercial, industrial and residential development in the area west of Sharyland Plantation to Conway Avenue and bounded by Trinity Road on the north and the international crossing to the south. In all, an area of about 6000 square acres are slated for development in that area, Silva said.

Maria Torres, of the engineering firm Half Associates, told board members plans for phase two of the project would be about 90 percent complete by this week. She said the plans would not be complete until the board had an opportunity TOreview and approve them.

Event Center water tower
Also June the board was updated on the status of construction of the 750,000-gallon new city water tower being built off Shary Road next to the Mission Event Center, currently under construction. Mario Reyna of the civil engineering firm, Melden and Hunt, told the board concrete was poured into the 10-foot deep foundation for the project on June 21. He said the foundation contains the same width of reinforcing bar normally used in bridge construction. Because it takes up to 54 days for concrete to fully cure Reyna said it could be about two months before construction resumes on the tower.

The MRA board approved reimbursing the City of Mission up to $2.3 million for the tower, which was the originally-budgeted amount for the tower. However Silva informed the MRA board the payment amount will be less because the actual bid came in at about $2-million. According to documents distributed during a Mission City Council planning session last month the tower’s actual cost is expected to be $1.927-million.

The board was also informed it could be another two weeks for work crews to complete paving of the east and westbound frontage roads at the Inspiration
Road extension project. Silva said he was informed by the project’s engineer it could be another month for Rio Valley Switching to complete installation of traffic controllers at the intersection with its rail line. Once that is done the project will be considered complete, Silva said.