For more serious fisherman who want to go deep sea fishing there are  smaller charters like those operated by Captain Kevin Nichols, who will take out up to four people on his 18-foot power boat; or Capt. Bob Sirvello, who will take up to six people out on his 25-foot power boat for half or full day excursions. Prices can vary among the smaller boats. For example, Nichols charges $250 for a single fisherman, $375 for a pair and $50 for each additional passenger up to the boat’s maximum capacity of four. Sirvello charges $400 for a pair of fisherman and $50 for each additional fisherman up to his boat’s maximum capacity of six. 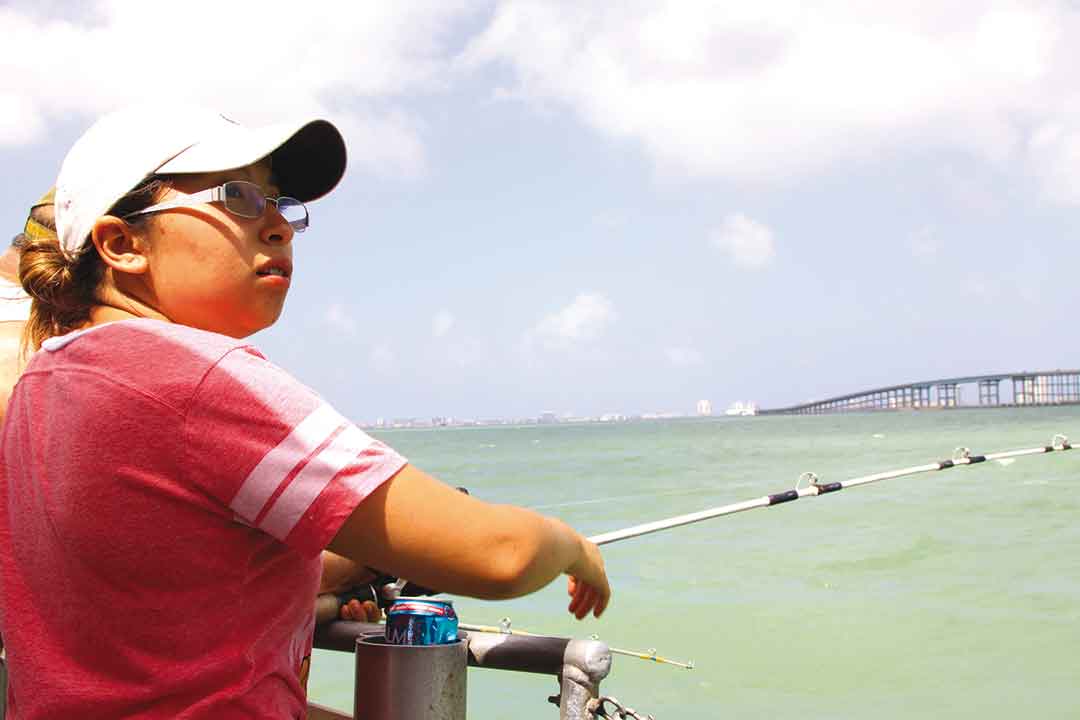 But arguably the most family-friendly and novice fisherman-friendly boat on Laguna Madre is the Danny B, a 50-foot boat powered by a single 365 horsepower Detroit Diesel engine with a capacity of up to 40 passengers owned and operated by Darryl and Laura Stiers. The Stiers charge $20 for children age 4 to 11 and $25 for all other passengers. However adults can get the children’s price by printing out a coupon from the charter’s website, Laura said.

The price includes bait and tackle and deck hand Michael Curry, who starts off the trip with a quick fishing lesson. Curry also removes all fish from their hooks and he’ll un-snag your line if need be. For 50-cents he’ll also filet ones catch which can be brought to one of several area restaurants that for a small charge will season the catch to taste and cook to order.

At 22 Curry has spent half his life on boats as his father, Eddie Curry, owns his own charter service. The younger Curry hopes to open his own restaurant in the near future serving up his own catch of the day.

On Saturday the Danny B left the dock next to Louie’s Backyard Restaurant with 35 passengers, including one reporter, on a four-hour fishing trip south of the Queen Isabella Causeway, the two-mile long bridge that connects South Padre Island with the mainland. The boat was captained by Thomas Garcia, 35, a Port Isabel native and lifelong fisherman who has shared piloting duties with Stiers the past four years. For a decade Garcia piloted ships tending to oil rigs in the Gulf of Mexico and is licensed to operate up to 100-ton ships. Garcia said he much prefers watching families enjoying themselves than being out on the ocean for up to 28 days at a time working for the oil industry.

“A lot of people come with their families enjoying the scenery, relaxing and having a good time,” Garcia said. “They may only catch a catfish but to them it’s like catching a Blue Marlin. When you see the looks on their faces it’s priceless.”

Curry said the anglers would be fishing with 30-pound fish line with a 4-ounce weight tied at the end of the line. A 4.0 “J” hook is tied about a foot above the weight so the bait, either shrimp or squid, dangles about a foot off the bottom where Sand Trout, Whiting, Black Drum, Croaker, Kingfish, Shark, Sheepshead and Stingray feed. Curry explained to patrons how to release the line from the reel and let the weight fall to the bottom. Then he told patrons to reel in the line enough to remove the slack and to keep a finger on it so they can feel the fish biting the bait. Once feeling a bit Curry explained to yank on the rod to set the hook before reeling in their catch.

“This kind of fishing is really simple. We just fish off the bottom,” Garcia said as passengers loaded onto the boat. “It can make even a rookie look like a pro on a good day. That’s why people love these trips.”

Garcia said depending on the winds and currents anglers will fish in waters between five and 50-feet deep. He said if the current is strong the weight will never make it to the bottom in deep water.

“Fishing all depends on the tides,” Garcia said. “The stronger the tide the shallower we fish.”

Among the anglers on the boat was former Sharyland High School cheerleader, 19-year-old Brianna Grande, who is studying to be a paramedic at South Texas College.  She was accompanied by her 20-year-old brother, Brian, a criminal justice major at STC, her grandfather, Abelardo Guerra, 72, a retired oil field worker and Mission resident, and Brianna’s mom, Janie Guerra. None were having much luck catching fish Saturday but Grande said they were enjoying the trip just the same with anglers looking out for dolphins and sea turtles.

For Austin resident Jason McWhorter, fishing on the Danny B has become a family vacation tradition. On Saturday he was aboard with eight members of his family.

“A day at the beach, a day fishing on the Danny B and a day at Schlitterbahn. It’s become our family tradition for the past three years,” McWhorter said, adding he is not an avid fisherman, normally.

For Joe Avila, who manages an optometrist’s office in Pharr, it’s a chance to spend the day with his wife, Rosie, and their daughters, Illiana, 24, and Daniela, 28. Daniela said she was the only fisherman in the family but usually from a pier. Avila said he brought a large cooler and ice to pack whatever they could catch.

“Something to do to get away from the rat race,” Rosie Avila said.

Gilbert Gentry and Robert Torres grew up together in the Houston suburb of Rosenberg and attended Lamar Consolidated High School where they played football and basketball together. When Robert was a sophomore his family moved to Fresno, Calif., but in his senior year Gentry’s parents allowed Torres to live with them so he could attend his senior year at Lamar and graduate with his 1990 class. Upon graduation Torres moved back to Fresno where he’s a sales executive. The wedding of son, Zachary, who is stationed at Dyess Air Force Base in Abiliene, brought Torres back to Texas where the two friends reunited for the first time in 26 years. On Saturday their families spent the afternoon together on the Danny B.

“I never even met him before,” Gentry said, gesturing to Torres’ 15-year-old son, Sammy, who bagged the largest catch of the day when he reeled in a small Hammer Head shark that was released back into the bay.

“He’s the only reason we came fishing today,” Gentry said.

“I love it,” the senior Torres said of his first salt water fishing trip. “The weather’s nice and the people and scenery are awesome. We’d be having a great time even if we didn’t catch any fish.”

The second best catch of the day belonged to Joseph Inch of Edcouch Elsa. The 41-year-old apartment maintenance man reeled in the only Pompano of the day. Most of the other fish caught this day were Whitings or Stingrays. One angler reeled in a small Sea Robin which along with several marine catfish were caught and returned to the water, Curry explaining they are poisonous. Also automatically returned to the water are eels and Stingrays, unless the latter are to be used as bait, Curry said.

“I mostly fish fresh water but whenever we fish salt water it’s the Danny B,” Inch said. “They always treat us really well.” Inch said normally he has Curry filet his catch, which he takes to Louie’s Backyard to be blackened and grilled.

“But since I only caught one today I think I’ll just take it home and cook it some other time,” Inch said.
Recent fishing not what it used to be

About four times during the trip Capt. Tom Garcia gave the command for the anglers to reel in their lines so he could move to another fishing location where he hoped the angling would be better. After moving a third time Garcia was on his knees in the pilot’s cabin, his elbows resting on his captain’s chair, his hands clasped together. He said he was praying the fish would start biting so his customers would have a good time.

“The winds don’t help,” Garcia said, referring to the 20-knot winds that afternoon that at times caused the boat to rock significantly in the water. “They disrupt the bottom and the fish don’t bite as much.

“To tell you the truth fishing has been on the decline the past 18-months,” Garcia said. “Two years ago there was a severe red tide and this past winter was pretty mild with the water staying pretty warm all year. We’re not sure why the fish aren’t biting like they used to when we’d come back with 300 or 400 fish that would make everyone feel like a pro.”

All the conditions Garcia described can contribute to poor fishing conditions, said Jason W. Ferguson, a fisheries biologist with the Texas Department of Parks and Wildlife, especially winds that can cloud the water making it more difficult for fish to see the bait.  But Ferguson said fish counts using gil nets have shown populations of Whitings and two other species of deeper water fish the Danny B is after, Black Drums and Croakers, have actually increased in the past year. He said Whitings, which is another name for Southern King Fish and Gold King Fish, have shown population increases over the past decade. He said King Fish  are considered so plentiful the state doesn’t even put limits on how many can be taken like it does for the shallow water sport fish such as Sea Trout and Red Fish. But Ferguson said it is more difficult to count Kingfish with gil nets because they stay close to the bottom in deeper waters outside the range of the nets. Ferguson said he trusts the observations of fisherman who are out daily but doesn’t believe there is any reason for concern about the Whiting populations in the Laguna Madre.

“Fisheries are very cyclical,” Ferguson said. “You’re going to have a couple good years of really good fishing and then maybe a couple bad years based on a number of factors including winter conditions and red tide.”

Ferguson said red tide is an algae that is toxic to fish and can kill off fish in large numbers. He said scientists still aren’t sure what causes the algae.

Garcia’s prayer seemed to have been answered because in the last hour more fish were caught than the previous three combined. Though only about two dozen fish were caught from the Danny B last Saturday afternoon none of the patrons expressed disappointment. Austin resident Alan Codina, 47, who is McWhorter’s brother-in-law and who brought son, Stratton, 7, and daughter Campbell, 10, echoed what many had said that day. Even if they didn’t catch a fish it was a fun outing. For Campbell it was the fourth year her father brought her on the Danny B.

“We don’t do this for the sport,” her father, Alan Codina, said. “This is for family.”