For 70-year-old Cresencia Guerrero it was the happiest day of her life. Two years after applying to the City of Mission to have the dilapidated home her parents once owned refurbished Mayor Norberto “Beto” Salinas presented her with the keys to a brand new, three-bedroom, two bath, 1,100-square foot home. The $59,800 home was paid for with federal Community Development Block Grant funds.

Guerrero said she will be living in her new home with her daughter, Vanessa Perez and her three grandchildren. Nathan Perez, 13, Heaven Lee Perez, 14 and Brianna Guerra, 18. 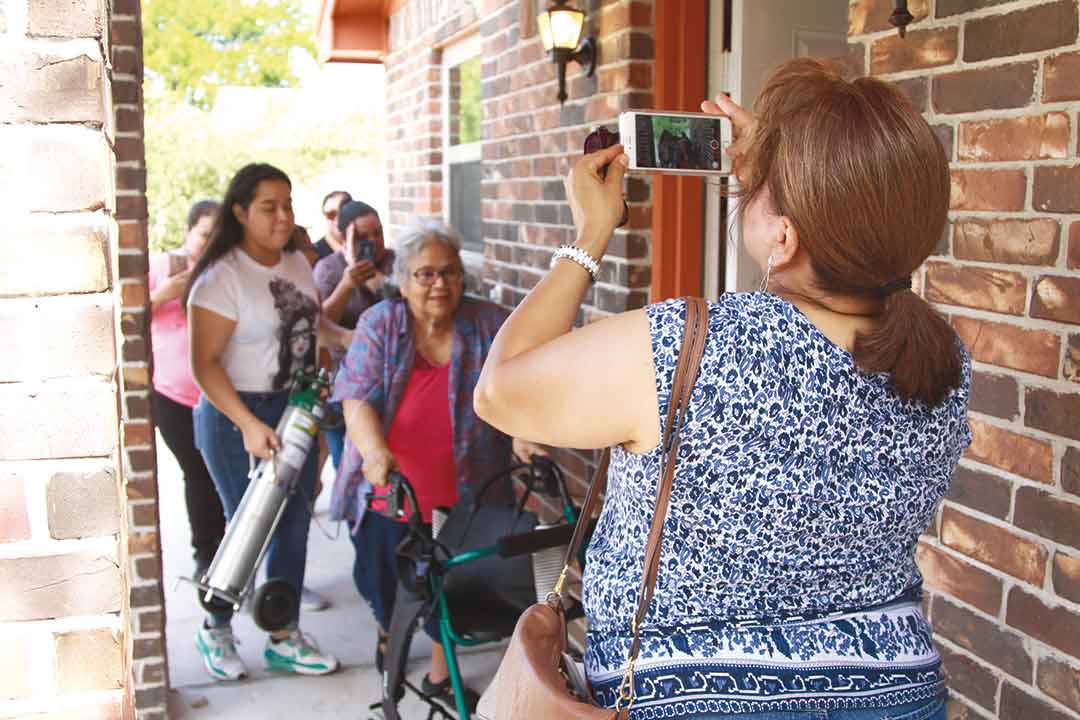 With her daughter-in-law, Irma Caballero, recording the moment Monday morning, Cresencia Guerrero prepares to enter for the first time the new home the City of Mission built for her to replace the dilapidated home she had been living in but could not afford to repair. The home was paid for with federal Community Development Block Grant funds. Progress Times photo by Joe Hinton

“I think this is the happiest day of my life,” Guerrero said just before entering the home in the 100 block of North Street for the first time Monday morning accompanied by about a dozen family members. As described by Mission Housing Coordinator Garbiel Ramirez the original wood-framed house that had been built in 1949 was “shacky,” when the city decided it was beyond repair. Ramirez said the home’s exterior walls were not insulated and all the paint had peeled off. He said the floors were uneven and the doors would not lock.

“There was a lot of infiltration of the elements,” Ramirez said.

Guerrero’s daughter-in-law, Irma Caballero, said Guerrero spent most of her time in the one room in the house that had a window air conditioning unit. Her new home now has central air conditioning.

“This is a prayer come true,” Caballero said.

Retired TV repairman David Corpus, 82, said he and his 77-year-old wife of 52 years moved into the original home, built in 1940 in the 1100 block of Holland Avenue, in 1965 when they purchased it from his brother-in-law who was moving to California.  In addition to keys to their new home the couple was presented with live plants for their yard from the Citizen’s Advisory Committee and the home’s builder.

“They were all very, very nice and they treated us with respect,” she said. “And when I had any questions Gabriel explained everything,” she said of the housing coordinator.

City Manager Garza credited Salinas with changing the focus of CDBG funding when he took office 18 years ago from giving most of the federal money away to local social service agencies to providing housing for the city’s most in need.

“When I came into office they were only building one or two homes a year,” Salinas recalled as he stood in the Corpus’ new living room. “And let me tell you it was city employees who were getting them. So when I found out about that we got rid of a lot of people and we started anew. And thank God since then we’ve built more than 400 new homes.”

Longoria said Monday’s presentation brought to 427 the number of families the city has assisted with permanent housing since 1999. Of that number 256 families have received new homes and 171 families received rehabilitation assistance. Longoria said the city builds between 13 and 15 new homes each year and refurbishes about two more. She said four more new homes and one refurbished home will be presented to residents in the next two weeks. In May the city council approved spending $249,700 on those projects.

According to a report to the city council prepared by Longoria’s office, the city allocated about 75 percent of the $904,000 it received in CDBG funds this year toward new housing with the rest given to local social service organizations. Longoria said the city will receive $872,000 in CDBG funds in the coming fiscal year starting in October and the city plans to spend a similar proportion on new housing.

Despite its efforts to replace crumbling homes of low-income residents the city continues to have fewer subsidized homes than the number of persons seeking them. During a ribbon cutting ceremony late last month for a temporary safe haven residence the city built with general funds, Mayor Salinas said the city had a waiting list of about 1,600 people seeking public housing.

“This is a great day for the City of Mission,” City Manager Martin Garza said Monday at the Corpus’ home. “Not only because we accomplished this project but it’s a project that helps families.”