Have you ever watched a recording of a large dog attacking a trainer dressed in a padded suit bring the trainer to the ground? Well that’s what an 11-year-old German Shepherd named Cezar was trained to do. And according to his fourth and last handler, Mission Police canine officer, Alexandria Leal, Cezar was good at it. She calls him “a bite dog.” She said he was trained to grab onto a persons right arm at the elbow.

“Every time there was a barricaded subject or a person with a knife, a person with a gun, they’d be like: Cezar,” Leal said Tuesday, speaking of a typical scene commander’s opinion of her canine partner. “Cezar is notorious. He’s known for his bite.” 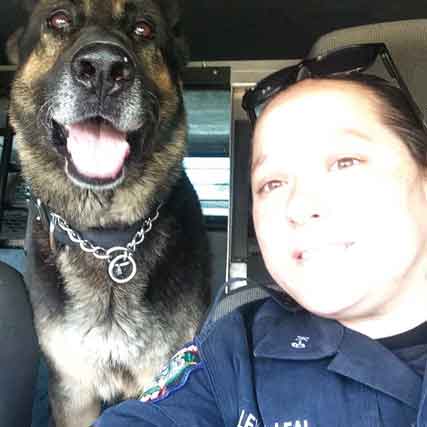 “But he was notoriously known for his bite. Most dogs, canines, when they bite they re-bite and then they’ll stay. But he would,” Leal slaps her hands together and holds them together, “and that was it. He’s notorious for that.”

Despite her professional relationship with Cezar, the 11-year Marine veteran, a staff sergeant who served three tours of duty in Iraq, said she couldn’t help but feel concern each time she released Cezar into harm’s way.

“Oh my God, if anything were to have happened to him that would have been a bad day,” said Leal, 35, who has been with the department for eight years, the past three as Cezar’s handler. That relationship changed Monday when at the request of Mission Police Chief Robert Dominguez, Cezar was retired from service after eight years with the department by a unanimous vote of Mission’s city council. The council also approved Leal’s adoption of Cezar who is now responsible for the cost of his care.

Leal said it was about nine months ago she noticed Cezar at times struggling to hop into the rear of her SUV patrol unit and occasionally dragging or shuffling a hind leg instead of walking with his normal gait. Last month Veterinarian David Heflin of Mission Veterinary Hospital recommended Cezar be retired noting the arthritis in his limbs and back as well as cloudiness in his eye lens could negatively impact Cezar’s performance during strenuous tasks. So Monday was not Leal’s best day. After a commemoration at city hall where Councilwoman Norie Gonzalez Garza broke up the room by congratulating Cezar on his retirement, Leal returned to her swing shift patrol duties without her partner for the first time in three years. She pulled up the song, “All By Myself,” and recorded a short video selfie alone in her patrol unit.

“It’s crazy how much I talked to him. I didn’t realize how much I talked to him until he wasn’t there anymore,” Leal said. “It was like the saddest day of my life.”
Recalling happier times with Cezar, Leal said one of her most memorable moments came just three months into their partnership while she was still working with another trainer. They were on a detail conducting the search of two homes of a suspected narcotics trafficker who’d been giving authorities the slip for years, she said; numerous searches turning up nothing for years.

That day in March 2015 nothing was found in either residence but at the second location there was also a locked barn in the back yard in which Cezar showed an interest, she said.

“And when he alerted he alerted hard,” Leal said. “When they alert they can either sit or go down to their bellies and he went down to his belly so it was a hard alert.”

Leal said she notified supervisors of the alert and put Cezar in her patrol unit. And that’s when she began to get nervous as officers brought equipment needed to breach the locked door.

To her relief searchers found an industrial blue barrel filled with what one reporter described at the time as a smorgasbord of marijuana, methamphetamine, cocaine, over 10,000 prescription pills, $26,000 in cash and weapons, two of which had been reported stolen.

“And it was crazy,” Leal said. “It was the best feeling ever.”

Fast forward about three years and Mission’s city council bid Cezar a fond farewell leaving the department with four canine handlers. Leal said she is hoping after the new fiscal year begins the city will allocate funds for another canine she can handle. In the meantime she said she and Cezar are making the transition from working canine to pet dog. Instead of being kept in his kennel he will roam the back yard with a dog pool, a ventilated doghouse and the company, on occasion, of her pet Chihuahua when she can be there to supervise.

“He can’t be with dogs over a certain weight because the alpha will come out and he’ll kill it,” she said.

Asked if Cezar was a difficult dog to handle Leal answered with a question.

“Have you seen that Corporal Leavey movie about that female Marine in Iraq and that dog was like, crazy?” Leal asked, referring to a Hollywood film, “Megan Leavy.”

The film, currently in theaters, is the true life story of Megan Leavey, a young Marine corporal whose unique discipline and bond with a military combat dog saved many lives during her deployment in Iraq. Assigned to clean up the K-9 unit after a disciplinary hearing, Leavey starts to identify with Rex, a particularly aggressive dog.

At 5-feet 4-inches tall and 160 pounds, Leal admitted when she first started working with the then 90-pound Cezar she was intimidated by him.

“And I remember when I got Cezar I was scared of him. But I did it smart and walked around with a pocket full of bacon so if he got crazy, if he tried to bite me I would just throw it,” Leal said, adding she spent a lot of time with Cezar on her own time just bonding with him and training with him in the back yard working with him on a leash performing simple tasks like walk, stop, sit, down.

“And I think that’s what he needed was just more of the companionship,” Leal said, noting there is a strict discipline in the handling of work dogs.

“You don’t play with them. You show them a certain amount of love but not too much because they need to know in their head, ‘I need to work.’ So they don’t like you taking them too much out of the kennel. It should be from the kennel to the car, the car to the kennel. And then the only time you have him out is when you’re training or you’re bond-building and that’s it.”

Nevertheless Leal said in working with Cezar she couldn’t help but love him.

Tuesday morning Leal said it was difficult for her to leave Cezar at home before returning to duty alone.

“Yesterday it hit me. I thought I was going to cry at the ceremony. And I was like, man, I’m OK. Maybe this isn’t such a big deal. And then after I dropped him off it was like,” Leal doesn’t complete the sentence but the tears welling in her eyes completed it for her.

Leal said having returned from a war zone working with Cezar was therapeutic. During the council meeting she thanked Chief Dominguez and the council for giving her the opportunity to work with Cezar.

Monday afternoon following the council meeting a video was recorded of Leal making a radio call to dispatch reporting for the last time canine Cezar was 10-42, police code for off duty. To which the dispatcher responded: “We would like to thank your partner for his eight years of service. He will always be a part of our law enforcement family. We wish him well in his retirement.”