One of Juan Arevalo’s first commitments as the new director of the Mission Boys & Girls Club was one of community service.

Generally, across the Valley, Boys and Girls Clubs cap their summer membership programs to a certain number of area children. That isn’t the case anymore in Mission as the program continues to thrive and resources are provided. 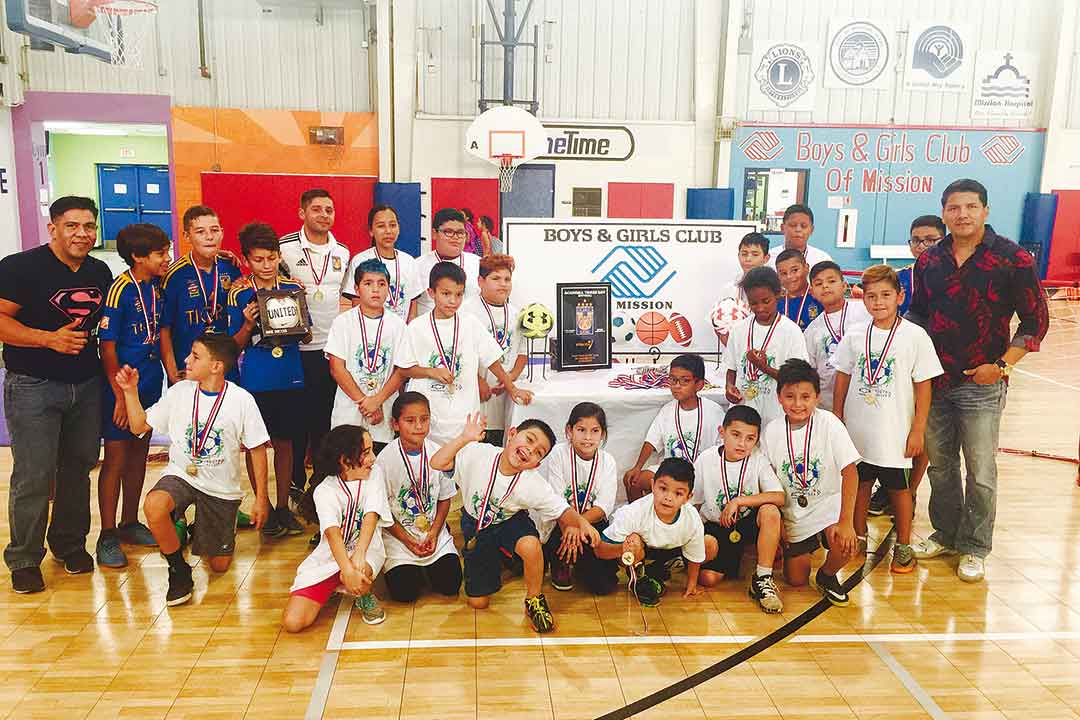 The Tigres of the Mexican Soccer League ran a soccer camp this summer for the Boys & girls Club of mission. Courtesy photo

As the summer winds down, the club is preparing for its fall season – which includes after school programs and sports. Flag football and volleyball registration begins July 24 and will run through the month of August. Arevalo expects several new teams to join the programs, which are for children ages 5-12.

The summer has been filled with activities – from a soccer camp run by the Mexican League’s Tigres program  and ice skating camps to Miss Teen Mission visiting and talking to the girls about life situations. She recounts that that she was a victim of bullying in school and that it can happen to anyone – rich or poor, intelligent, athletic, pretty… bullying does not discriminate.

“I heard she wanted to come in and talk and so we brought her in to talk with us first,” Arevalo said. “She started talking about life lessons and things that were so mature and inspiring for a girl that age. I asked her if that’s the type of things she would bring to the girls here and she said, ‘yes,’ so we did it.”

Arevalo expects to expand the volleyball program to run all year. He has four gyms for his use – two at the Boys and Girls Club and two other gyms off site.

But it’s not only sports during the school year that keeps the Boys & Girls Club busy. There’s the after school program, which is run at the club along with curriculums set up at Castro, Leal and Jensen Elementary Schools along with the club’s Banworth and CWV after school sites. Each child is provided dinner during the 3 p.m. to 7 p.m. program.  Tutoring, a computer lab, and arts and crafts are among the activities provided. At the home site, there’s also a teen center. The cost for registration is $50 and covers the programs all the way through the schools’ Christmas break. The after school program is for children ages 5-12. The teen center is open for children ages 13-17.

“There’s also a curriculum for them so they won’t just be on the phones all the time,” Arevalo said. “We teach responsibilities – some of the kids will work out front or with other staff but we’ll also have speakers come in and talk about self identity and being respectful and things like that. Trying to teach life skills.”

Arevalo said when he returned to the Boys & Girls Club after his six years in Palmview he immediately noticed that many who used to be members were now part of the Boys & Girls Club staff. He was also happy to hear the success stories of athletes who began their careers there and continued on to college – like Mission Veterans football player Diego Hernandez and baseball/football star Jacob Guerrero.

Hernandez finished his senior year with more than 4,100 yards passing for the Patriots, completing nearly 60 percent of his throws. He averaged 321 yards passing per game and threw for 45 touchdowns. For his three-year career at Mission Veterans he threw for 71 touchdowns and nearly 7,000 yards.

Guerrero recently committed to continue his baseball career at the collegiate level, signing on with Coastal Bend College.

“There have been a lot of kids who have come up through the programs here and it makes me proud to see their successes – on the field and in the classroom,” Arevalo said. “But it all comes down to one thing – we are here to serve the children and we will do whatever it takes to always provide service for our children. The city has been great with providing us resources and we will continue to look to expand and offer families programs that will benefit them and the entire community.”