If you were to ask Aurora Cavazos the secret to a long life, she’d give you a one-word reply: happiness.

“Happiness is having all my family around me every day and seeing them continue to surprise me with their love,” Cavazos said. 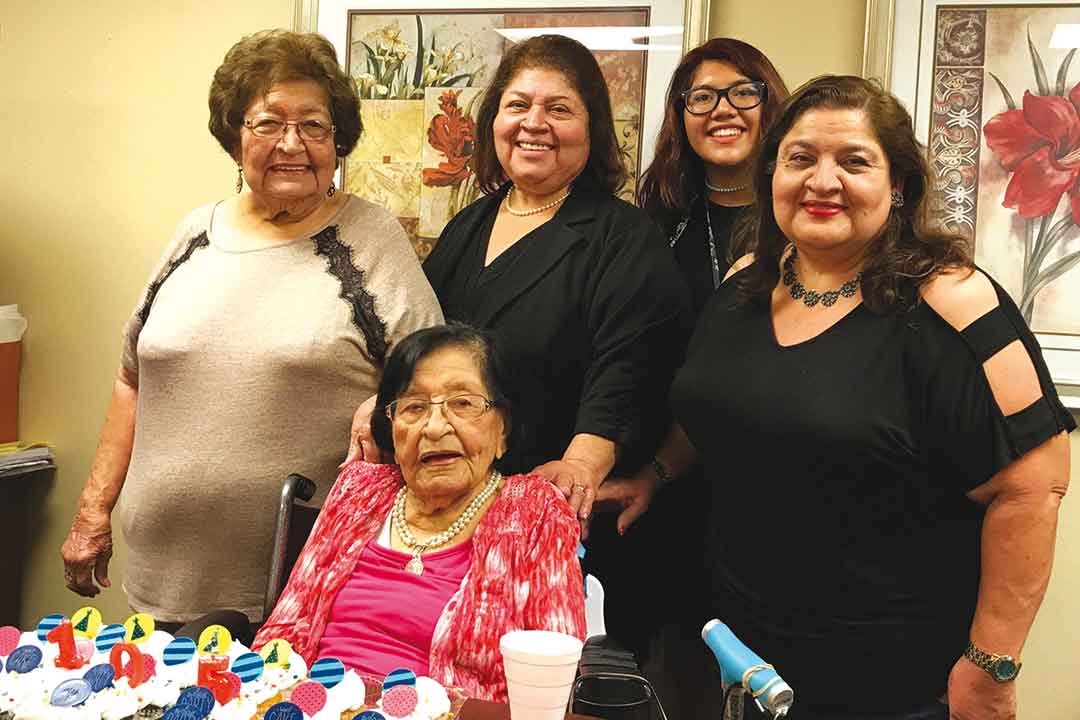 Cavazos made this statement the day after her surprise birthday party Tuesday that her family threw for her at the Briarcliff Nursing and Rehabilitation Center in McAllen where she has been living for the last two years. The party was an intimate affair with family members only as three generations stopped by to celebrate with her.

“On her birthday she was happy, I couldn’t believe that she was actually being cognizant,” Cavazos’ daughter, Belinda Thatcher, said. “She was so lively and talked to people and after the party she told her nurse, ‘I had a surprise birthday party, why didn’t you come?’”

Born July 18, 1912 in La Joya, Cavazos graduated from what was then Nellie Schunior Memorial High School in 1931 and is the oldest living graduate from her class, she said. The school became today’s La Joya High School.

“There were no buses, people had to walk to school every day,” Garcia, 94, explained. “We all had to walk a mile to school and again back home. Even though a lot of parents had their kids working, our father’s priority was that we all get an education. We were a family of eight and all but two of us graduated from high school.”

After graduating from high school, Cavazos worked as a seamstress in McAllen’s downtown area and made wedding dresses for her sisters and other friends. Cavazos was also instrumental in raising funds to build the city’s first church, San Nicolas, now known as Our Lady Queen of Angels, in the 1930s. During the fundraisers Cavazos met Blas Cavazos, a local salesman she would marry in 1935.

That wedding, Garcia said, coincided with the introduction of electric lights to the city, making her sister’s electrically lighted wedding the “wedding of the century” as the entire town attended the reception to witness the union.

The marriage between the two lasted 66 years until Blas died in 2001, Garcia said.

Since her wedding, Cavazos has shown a keen interest in technology, Belinda’s sister, Sonia Leal said.

“She constantly jokes that she will try to live for another 100 years just to see what new technology will be released,” Leal said. “Since she was a kid, she went from riding donkeys to riding in covered wagons, then driving cars and now flying on planes. She’s constantly fascinated by technology.”

Family Ties
According to Garcia, due to the large size of their family, she and Cavazos have relatives “all over the Valley.”

Relatives include Hidalgo County Judge Ramon Garcia, who is Garcia’s son and Cavazos’ nephew, and Alda Benavides who currently serves as La Joya ISD’s superintendent and is a second cousin to Leal and Thatcher.

Like Benavides, many of Cavazos’ relatives have worked for La Joya ISD either as coaches, administrators or teachers.

“I lost count after 50,” Leal said when asked if she had an idea of the number of relatives who worked in the district.

Thatcher noted that longevity runs in her family as she had a great aunt who lived to be 115 and wonders if a similar fate would occur for her mother.

“She kept being convinced she wasn’t being given her medication properly so she kept wanting to retake them,” Thatcher recalled. “She loved going out for walks without any help or letting people know when she was leaving so we worried for her. Here she receives care all day and some relatives and I visit her every day for at least an hour.”

Thatcher, Leal and Garcia all said they cherish any time they have left with Cavazos.

“People always ask me ‘are you ready?’ And I say, ‘I’m never going to be ready for something to happen to her,’” Thatcher said. “She’s my parent, nobody wants to lose a parent and she’s not close to the stage where she’s suffering or bedridden. When my dad went away like that, we certainly weren’t ready. The best we can do is be close. We’ve always been close. We take comfort in that.”