With six weeks to go before the first football game of the 2017 season, crews are working Saturdays to ensure the new $8 million Tom Landry Hall of Fame Stadium is ready for the kickoff between the Veteran’s Memorial High School Patriots and the Harlingen Cardinals on Sept. 1.

Though school district documents describe the Mission High School project as a renovation, the 41-year-old original stadium and its 30-year-old press box were completely demolished and are being replaced with a 9,000-seat stadium with a new façade and a 12-foot tall bronze statue of the stadium’s namesake. The project was initiated three years ago because the eight handicapped accessible seats in the original stadium built in 1976 did not comply with Americans with Disabilities Act requirements. 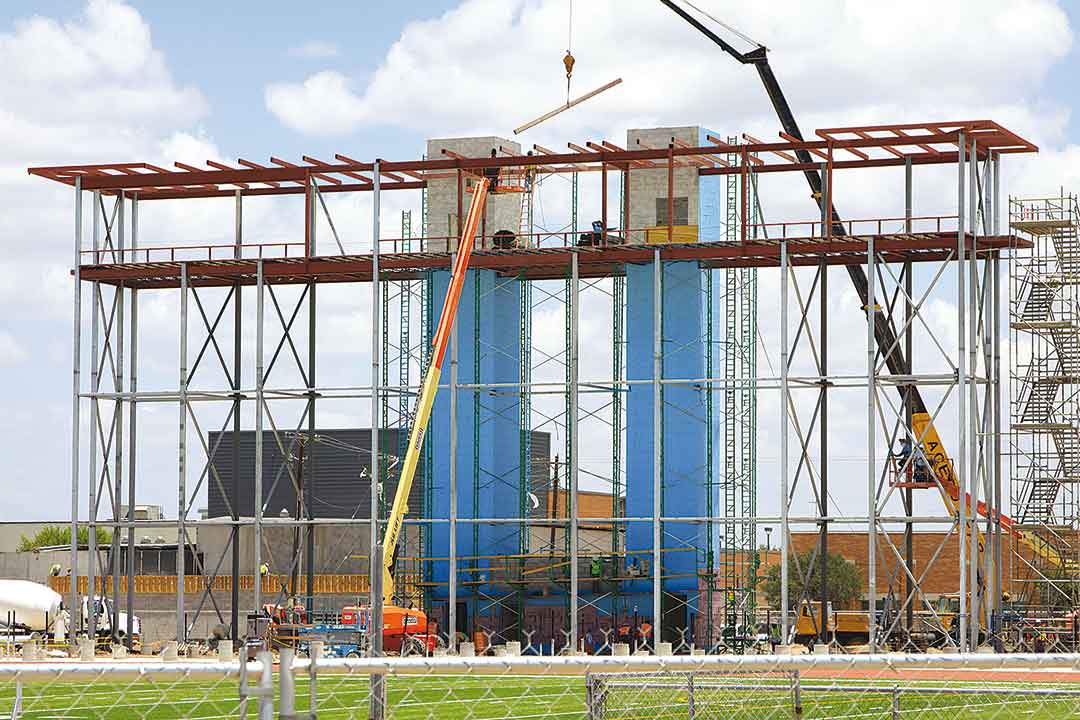 A crane operator lowers a metal rafter down to workman ready to weld it in place as part of the roof support Tuesday as construction continue’s at Mission High School on the new Tom Landry Hall of Fame Stadium. Progress Times photo by Joe Hinton

The new stadium will include a larger press box that will accommodate coaches from both teams, a new 700-seat home-side reserved section with back rests, two new concession stands, a new concrete base under the bleachers with new bleachers that meet ADA requirements. The project also includes a new public address system and new lighting.

In Nov. 2016 the Mission CISD Board of Trustees approved the new design by Alvarado Architects and Associates of Donna, and in January the board awarded the construction contract to Holchemont Ltd., a McAllen-based construction company.

Though the company’s original bid of $7.46 million included a 235-day work schedule and a target completion date of Sept. 24, school district administrators obtained an agreement with the company during contract negotiations that the stadium would be completed by Aug. 21 with the first home game occurring on Sept. 1.

However, in April construction company representatives requested trustees approve an additional seven days to complete the project due to inclement weather in March. The company was later granted an additional eight days to complete construction due to inclement weather and student test days in April that temporarily halted work, ostensibly pushing the completion date to September 5. Trustees granted the delay after obtaining a promise from the company it would take measures to make up the lost time and complete the project by Aug. 21. Trustees denied a request for an additional four rain delay days during a school board meeting in June.

Though the current contractual completion date remains Sept. 5, the goal is still to have the stadium ready by Sept. 1, said MCISD spokesman, Craig Verley, who said crews are working Saturdays to make up for the lost time. He said contingency plans are being finalized in the event crews have not completed construction on time.

On Tuesday, the frames for the 4,000 seat visitors side bleachers stood visible from the roadside, minus the seating portion. Across the pristine artificial turf field workers were welding steel rafters in place in what will become the roof of the new press box while others were preparing the huge light poles for installation and others were applying fascia to the twin, four-story cinder block columns that support much of the home side structure.

By sight alone it would be difficult to judge whether the project will be completed on time, but Verley said district administrators are keeping a close eye on the work.

“Every step of the way the importance of getting this project completed before the first home game of the season has been communicated to the architect and contractor, “ Verley said.