Protests against portions of the new border wall promised by President Donald Trump are scheduled for this weekend. The proposed wall would run through the Santa Ana National Wildlife Refuge and possibly put La Lomita Mission behind the wall.

On Saturday the public is invited to join organizers at 7 a.m. at Mission’s Our Lady of Guadalupe Church, 620 N. Dunlap Ave., Mission, for a sunrise ecumenical walk to La Lomita Mission, the historic chapel that gave Mission its name. La Lomita, an active Catholic shrine, would be in no-man’s land between the wall and Rio Grande River if the proposed levee-border wall is built according to plans unveiled by the U.S. Customs and Border Protection last week, said Clarissa Riojas, an event organizer and volunteer with the Lower Rio Grande Valley Sierra Club, one of the event’s hosts. 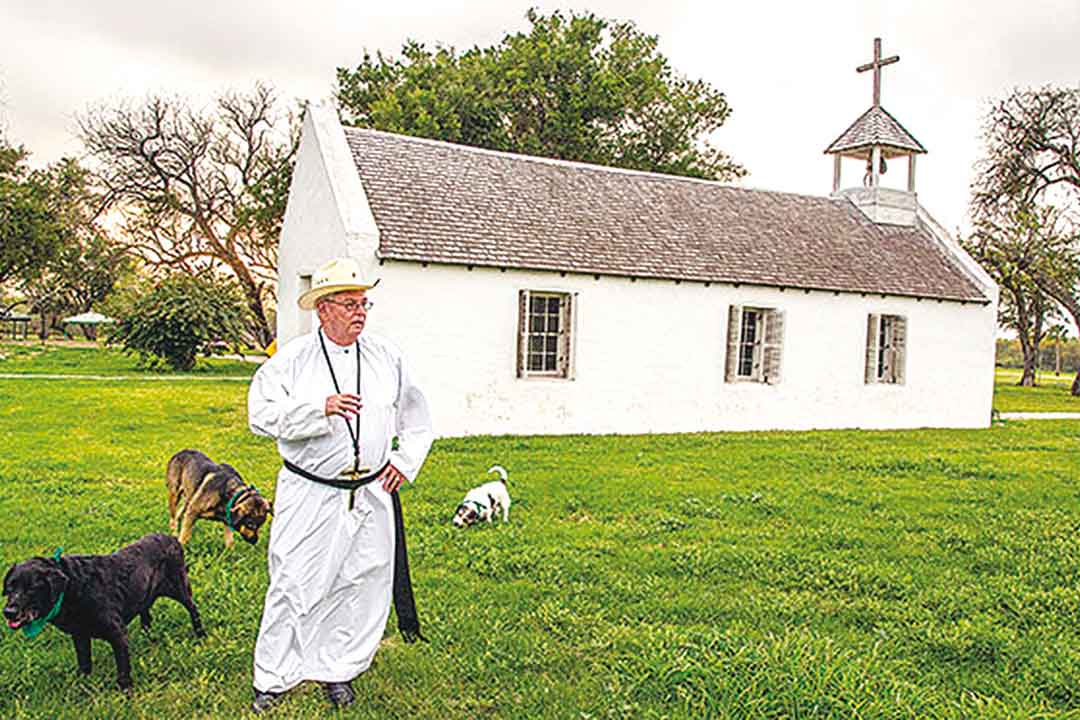 Father Roy Snipes with friends in an undated photo in front of La Lomita Mission. Courtesy of Texas Highways Magazine

Persons who cannot or don’t want to participate in the sunrise walk can join the event, billed by organizers as, “Save the Mission! Save the River! Resist the Wall,”  at 9 a.m. with a rally at La Lomita that will include speeches and music and will be followed by a community picnic beginning at 10:30 a.m. Free tacos will be available with music by Rumbo Al’ Anacua and the Treble Thrivers. La Lomita is located three miles south of Expressway 83 on FM 1016.

Speakers at Saturday’s event will include Scott Nicol, an executive member of the Sierra Club, Martha Sanchez, community organizing coordinator with La Union del Pueblo Entero, Efren Olivares of the Texas Civil Rights Project, environmentalist Betty Perez and Father Roy Snipes of Our Lady of Guadalupe Catholic Church in Mission, among others. Snipes, a member of the Oblates of Mary Immaculate, said he is concerned by what unknowns remain about CBP plans to build a wall that could impact use of La Lomita Chapel. Snipes said neither he or the Catholic bishop were invited to a closed-to-the-press briefing last week hosted by U.S. Customs and Border Protection Sector Chief Manuel Padilla who unveiled CBP plans to build new sections of wall along the Rio Grande River. Snipes said the Oblates own the land between La Lomita and the river and the church owns La Lomita Historical Park that borders the river.

“I would love to have gone if I could have but nobody invited me,” Snipes said. “That’s church property. You’d think they would have called me or at least called the bishop and told him, ‘We’re going to wall off one of your chapels. What do you think about that?’”

Snipes said he is concerned by the way the federal government seems to be taking unilateral action in preparing new sections of wall, citing recent activity by surveying teams at Santa Anita Wildlife Refuge in Alamo and the National Butterfly Center in Mission.

“The arrogance of coming into the wildlife sanctuary without even asking anybody and start digging and surveying and bulldozing and saying, ‘We can do it because we’re the government,” Snipes said. “That’s not the way we thought of our democracy working. We don’t think of our government as operating that way.”

Last week six U.S. Representatives from Texas signed a letter to Elaine Duke, acting secretary of the U.S. Department of Homeland Security, urging her department to be more transparent about its plans to extend the border wall in the Rio Grande Valley. Among them was U.S. Rep. Vicente Gonzalez, a Democrat representing part of McAllen, Edinburg and Weslaco and other areas to the north of the Valley. In an Aug. 4 press release announcing the letter Gonzalez said, “I am adamantly opposed to the construction of a wall along the U.S. – Mexico border, especially one that would go through one of our most precious refuges, the Santa Ana National Wildlife refuge.” Gonzalez urged Duke to exercise greater transparency in the process, a sentiment Snipes echoed in comments to the Progress Times.

On Monday the Progress Times requested an interview with Padilla and a copy of the map of the proposed new sections of wall that was shown but to but not provided to invitees. As of press time Thursday the newspaper had received no response to its request.

The Sierra Club’s Nicol, who attended the briefing, said he took a phone photo from across the briefing room of the CBP map displayed on an easel during the briefing. He provided it to the Progress Times but as he conceded it was mostly illegible.

Snipes said it is the government’s lack of transparency that concerns him.

Besides Our Lady of Guadalupe, hosts of Saturday’s event are the National Butterfly Center, whose founder, Dr. Jeffrey Glassberg, president of the North American Butterfly Association, was scheduled to fly into the Valley today; Call to Action Rio Grande Valley; the Environmental Awareness Club and La Union de Pueblo Entero.

The Sierra Club’s Riojas said Saturday’s event was conceived as a way to reaffirm the culture and history of the Rio Grande Valley and to highlight the way that border communities are connected to the river and to neighbors in Mexico.

“But we also want to draw attention to the damage that the Trump administration’s planned border walls could do here,” Riojas stated in a press release, “like cutting off people’s homes, stripping farmers of their land, closing parks and devastating ecologically sensitive wildlife refuges.”

On Sunday another event is scheduled at the Santa Ana National Wildlife Refuge. Riojas noted published reports revealing Santa Ana could be one of the first locations where new border walls are built because the refuge is on federally owned property.

Participants are asked to arrive by 9 a.m. for the “Protect Santa Ana Protest Hike,” that is hosted by Save Santa Ana National Wildlife Refuge and the Lower Rio Grande Valley Sierra Club.

“In the coming months the U.S. Senate will be debating funding for new border walls, including the Trump administration’s plans for 28 miles of levee-border wall in Hidalgo County and 32 miles of bollard border wall in Starr County and organizers of these events want to ensure that South Texan’s voices are heard,” Riojas said.

The hike will begin as soon as everyone who plans to participate has paid the park’s $5 entry fee. Organizers suggest bringing exact change to speed up the entry process. Organizers say if the parking lot is full participants can park along Military Highway but vehicles must be off the shoulder and on the grass. Law enforcement is expected to be on hand to assist vehicular and pedestrian traffic.

Participants are asked to bring plenty of water and their cameras to record the event and share it “far and wide,” Riojas said.