Coach David Gilpin loves a challenge. In this his ninth year as the Mission Veterans Memorial Patriots head football coach, he’s facing one of the biggest challenges of his coaching career. Replacing last year’s All-Valley Football Player of the Year and Sub 6A Male Athlete of the Year, quarterback Diego Hernandez.

Fortunately, he didn’t have to look far to find his new starting quarterback. He found him under his own roof.  Gilpin’s son, Landry Gilpin, will be under center for the Patriots this year. 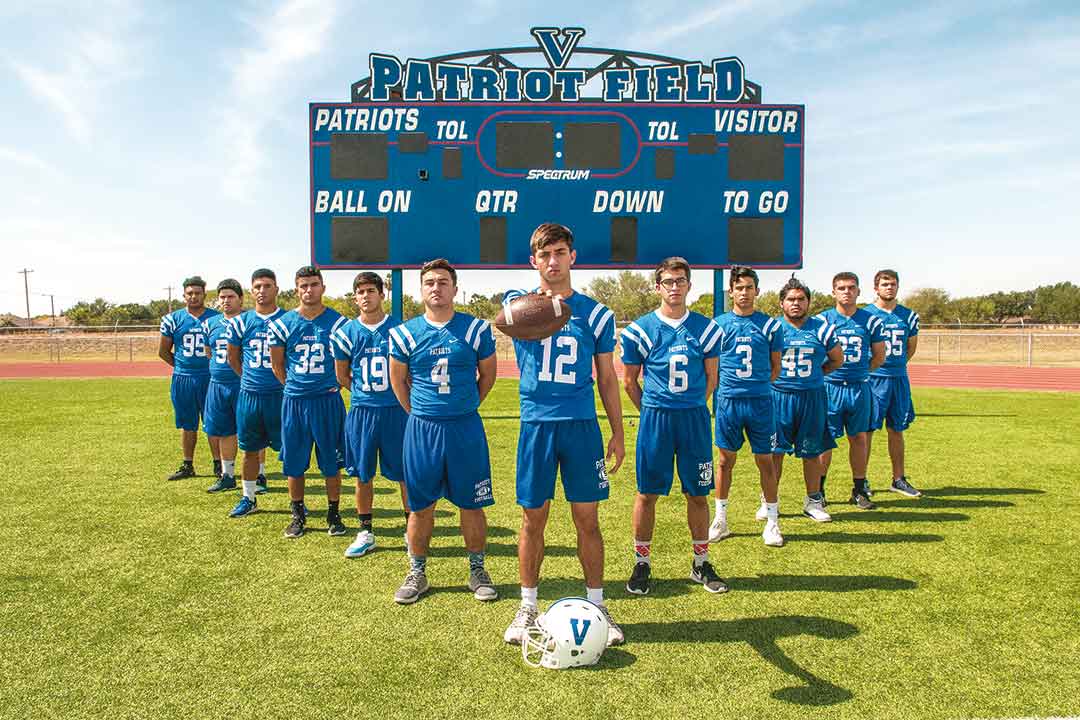 That’s the good news. The bad news is that Hernandez is just one of several cogs from the 2016 Patriots’ offensive machine that have to be replaced. And while replacing graduating seniors is an annual occurrence for high school coaches, Gilpin has had to replace more than just players this year.

“This is a big transition year for us,” Gilpin said. “Obviously we lost three statistical warriors in Diego, Jacob (Guerrero) and Roman (De Leon) who all put up unbelievable numbers.  We’re taking Landry out of the receiver position and put him back at quarterback. So we lost three out of our top four receivers, we lost our returning quarterback, we’ve lost our offensive coordinator (Lupe Rodriguez) who was hired at PSJA as their head coach, we’ve lost our special teams coordinator (Casey Smith) who’s gone over to Pioneer and we’ve lost our offensive line coach (Jesse Rodriguez) who is now the offensive coordinator at PSJA. So we’ve got a lot of changes.”

“Luciano, you’ve been around me long enough to know that I enjoy a challenge,” added Gilpin. “We feel like this is a year in which we’re going to put a stamp on who we are as a team. I feel that we’ve done a great job over the last eight years. As a matter of fact, it’s been six years since we won fewer games than we won the year before.”

Despite the fact that the Patriots entered post season play last year as the fourth seed in District 31-5A, they advanced further into the playoffs than they ever have before. Will Gilpin and the 2017 Patriots be willing to settle for anything less this year?

As for the younger Gilpin, while this may be his first opportunity to open the season as the Patriots’ starting quarterback, it won’t be his first experience leading the offense. In his freshman year, after Hernandez suffered a season-ending injury in week six, Gilpin started four district games (3-1) and two playoff games (1-1).

When asked if he thought that experience will help him when he assumes the starting position in week one this year, Gilpin said, “It was a great experience for me to get to play a few games at quarterback my freshman year. We had a difficult schedule and having to go up against Victoria West in the playoffs ended up being good experience for me and I think it was for the better of the team. I think we’re going to have a good year this year.”

As a freshman signal caller, Gilpin relied on his athleticism and his legs much more than his passing skills. So much so that in the Patriots’ 33-21 bi-district round win over the Donna Redskins that year, he ran the ball 24 times for 295 yards and four touchdowns.

According to his father, however, Landry has worked hard and taken great strides in his passing abilities since then.

“I’ve been working really hard this summer on transitioning from a scrambling quarterback to a dual-threat quarterback,” explained the 5-foot-11, 170-pound quarterback. “I think it’s going to help the team a lot if I can be more of a dual threat.”

According to Coach Gilpin, the offensive line is one of the Patriots’ strong points this year. One reason for that is the return of starting offensive guard, Alex De Leon.

When asked what he attributes the Patriots’ playoff success to last year, De Leon said, “I think that the level of competition we had to play in our district last year helped prepare us for the playoffs a lot. Our district was pretty tough, so when we went up against Brownsville Veterans, the toughest team in their district, we were ready for them. Same thing went for Flour Bluff; Brownsville Vets got us ready for them.”

De Leon said, this year he is looking forward to “going to the playoffs again and hopefully making it back to the third round of the playoffs if not further.”

One area of concern Coach Gilpin had coming into the season was the Patriots defensive backfield. However, he believes that his players’ hard work during the off-season will pay dividends once the season kicks off.

Senior safety and returning starter Giovanni Grimoldo is one of those hard working players Gilpin referred to. Grimoldo, however, has been training for more than just football.

“I’ve been going to the weight room and to summer conditioning Monday through Thursday for six weeks now,” Grimoldo said. “I’ve been in Iron Man for four years and I’ve run routes with Landry.”

The Patriots are scheduled to open their 2017 season with a non-district match-up against the Harlingen Cardinals Friday, Sept. 1 – originally scheduled at Tom Landry Hall of Fame Stadium. However, the stadium has been undergoing major renovations this summer and is not expected to be ready in time for that game. Should that be the case, the Patriots are in contract talks with the McAllen school district to play the Cardinals at Veterans Memorial Stadium on Thursday, Aug. 31 instead. 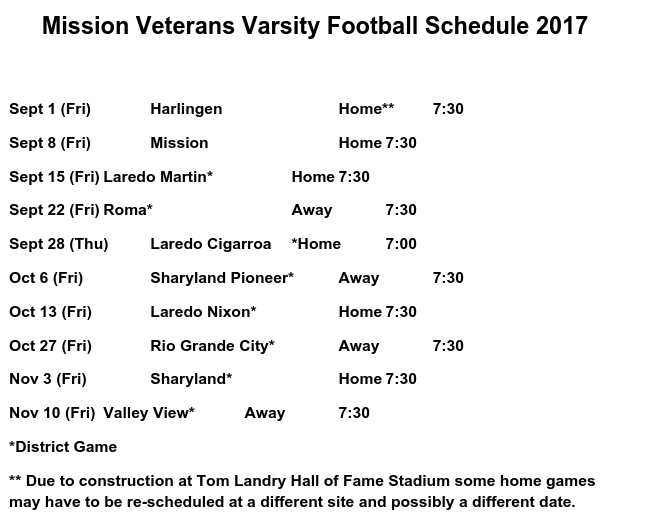