Today, over 150 years later, hundreds of people joined a processional and protest on Saturday, Aug. 12, to save the historic mission amid concerns the proposed border wall could affect the chapel, which is situated just south of the levee. 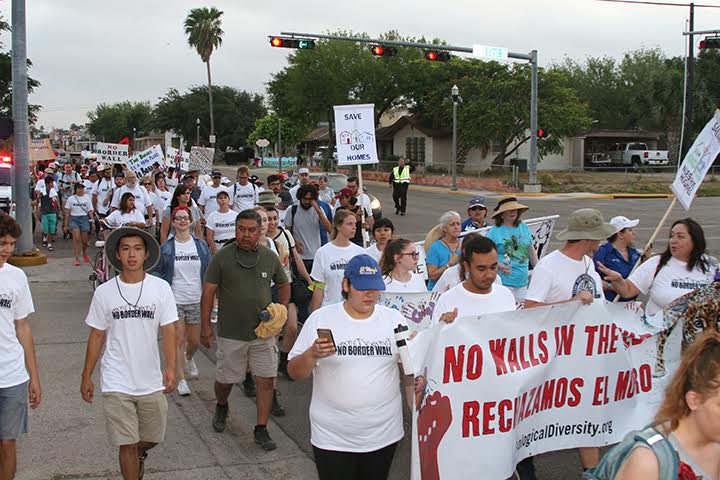 Our Lady of Guadalupe Catholic Church parish priest, Father Roy Snipes, supported the protest as he fears the proposed wall could restrict access to the old La Lomita Chapel by the church.

According to news reports, a three-mile section of the wall will also be constructed through the Santa Ana Wildlife Refuge in Alamo and possibly the National Butterfly Center in Mission, both of which are home to hundreds of bird and butterfly species, native plants and wildlife.  Environmentalists and nature enthusiasts fear the construction activity alone could destroy some of the native habitat in the vicinity of the wall and disturb the wildlife that makes the refuge their home.

In response to the border wall concerns, organizations such as the Sierra Club and La Union del Pueblo Entero helped organize the “Save the Mission! Save the River! Resist the Wall!” event, where the public was invited to protest the wall.

Saturday’s protest began with a 7 a.m. procession from Our Lady of Guadalupe Church in downtown Mission where attendees participated in a four-mile trek to the mission located 3 miles south of Expressway 83 on FM 1016.

Once attendees arrived at the chapel, they heard from several speakers, including U.S. Congressman Vicente Gonzalez and Rev. Snipes whose church still uses the chapel and its grounds. During the event he called the proposed border wall a waste of hard-earned tax dollars that divides the community.

Rep. Gonzalez praised the activists who showed up at the event. Gonzalez spoke out against the wall and offered alternatives such as developing more technology to aid Border Patrol officials.

“The anti-immigrant isolationist rhetoric we continue to hear does nothing more than just generate fear and uncertainty within our county and communities,” Gonzalez said of the wall. “This rhetoric is the opposite of everything the Rio Grande Valley stands for.”

Scott Nicol, an executive member of the Sierra Club, estimated that 750 to 1,000 people attended the event.

“Border residents oppose the border wall,” he said. “We don’t want to see our community militarized, and we don’t want to see immigrant communities terrorized. So, we’re trying to send a message to our state senators and rest of the country that they need to listen to what we want to have happen here and not impose border walls upon us.”

A second protest, a hike at the Santa Ana Wildlife Refuge, is set for Sunday, Aug. 13 at 9 a.m. The refuge is located at 3325 Green Jay, in Alamo. The hike will begin as soon as everyone who plans to participate has paid the park’s $5 entry fee, according to organizers of the event.

Read more of our coverage of these protests in our upcoming issue of the Progress Times.