Below is a preview of our page one stories which includes coverage on two protests that occurred last weekend against the proposed border wall and a lawsuit against the city of Palmview.

Organizers of the Save Santa Ana Wildlife Refuge reported 683 people participated Sunday, Aug. 13 in a human chain atop a levee  where a border wall is planned. Pictured above participants hike from the refuge’s Hawk Tower about a half mile to the levee. Progress Times photo by Joe Hinton 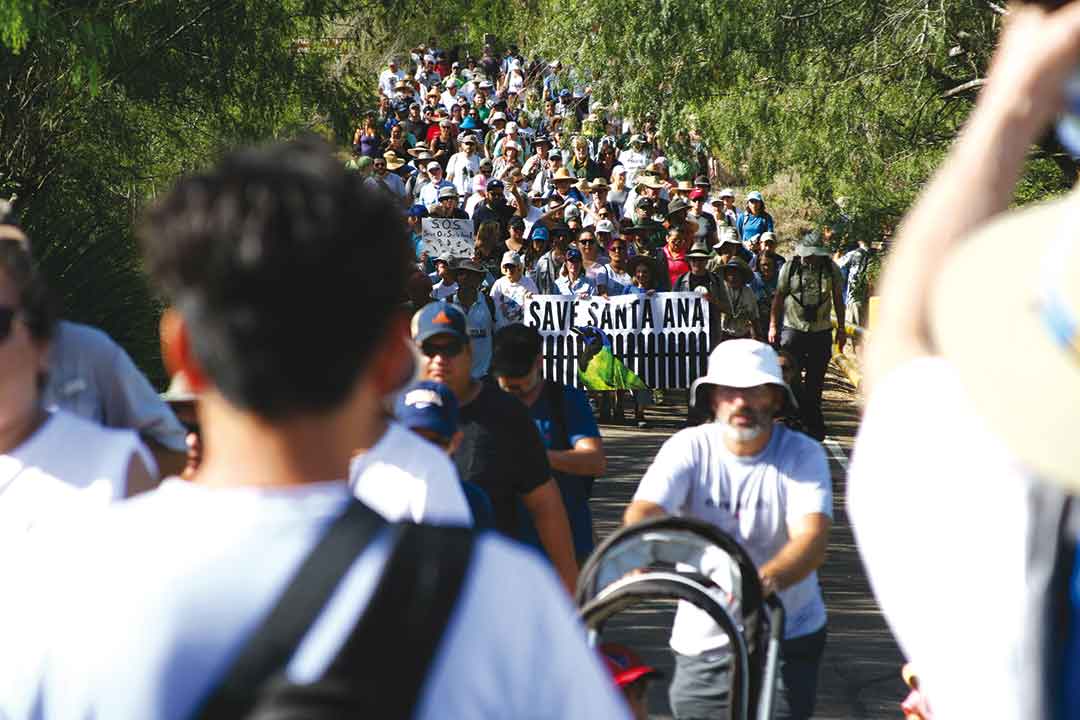 In the wake of two well-attended protests against President Trump’s plans to add 60 miles of border wall and fencing in the Rio Grande Valley, some activists are calling on Mission’s city council to pass a resolution in opposition to any additional walls in the city.

Last weekend, just under 700 persons were estimated to have taken part in a protest at Santa Ana National Wildlife Refuge opposing construction of a concrete wall along the refuge’s levee and more than 1,000 persons were estimated to have participated in a protest at Mission’s La Lomita Mission. (See related report.) Sierra Club members fear both iconic area attractions will be cut off from the public if CBP plans are realized.

Among the participants at Sunday’s Santa Ana protest was state biologist John Maresh, 53, who drove from his home in Austin to participate in the protest with his brother, Ronnie, 59, of Port Comfort. Both brothers said the wall will not stop drugs or illegal immigration and will only damage the environment.

Over 150 years later, an estimated 1,000 people joined a processional and protest on Saturday, Aug. 12, to save the historic mission amid concerns the proposed border wall could affect access to the chapel, which is situated just south of the levee that was built to retain the Rio Grande River when it floods.

The protest at La Lomita was the first of two last weekend against the proposed border wall with the second protest occurring the following day at the Santa Ana Wildlife Refuge in Alamo. (See related story.)

A Progreso police sergeant, once La Joya’s police chief, was arrested over the weekend on drug trafficking charges.

The arrest of Geovani Hernandez, 43, follows a yearlong investigation with multiple law enforcement agencies that allegedly revealed Hernandez was working with a drug trafficking organization.

Hernandez was arrested on multiple charges of aiding and abetting a “drug trafficking organization,” according to the unsealed indictment obtained by the Progress Times.

Palmview’s former city manager, fired in June for alleged incompetency, has filed a lawsuit in the Hidalgo County Court of Law against the city citing a breach of contract.

Segovia’s Houston-based attorney, Bernie Aldape, filed a lawsuit in July stating the city violated his client’s contract by terminating Segovia’s employment without compensation in violation of a severance clause in the contract. According to the complaint, the requested compensation would cover what Segovia would have been paid through the remainder of his contract, which ends in October, as well as 12 months’ severance pay plus legal fees.