The La Joya Coyotes football team came oh so close to making the playoffs last year. While it’s true that under first year head coach Reuben Farias, the Coyotes finished the regular season with a 2-4 record, that was good enough to earn them a share of fourth place in District 30-6A with only a head-to-head tie-breaker giving the Juarez-Lincoln Huskies the advantage for the district’s final playoff spot.

Having opened district play with wins over the Mission Eagles and the McAllen High Bulldogs last year, the Coyotes saw their promising season turn into a disappointment with consecutive losses to the four eventual playoff qualifiers. 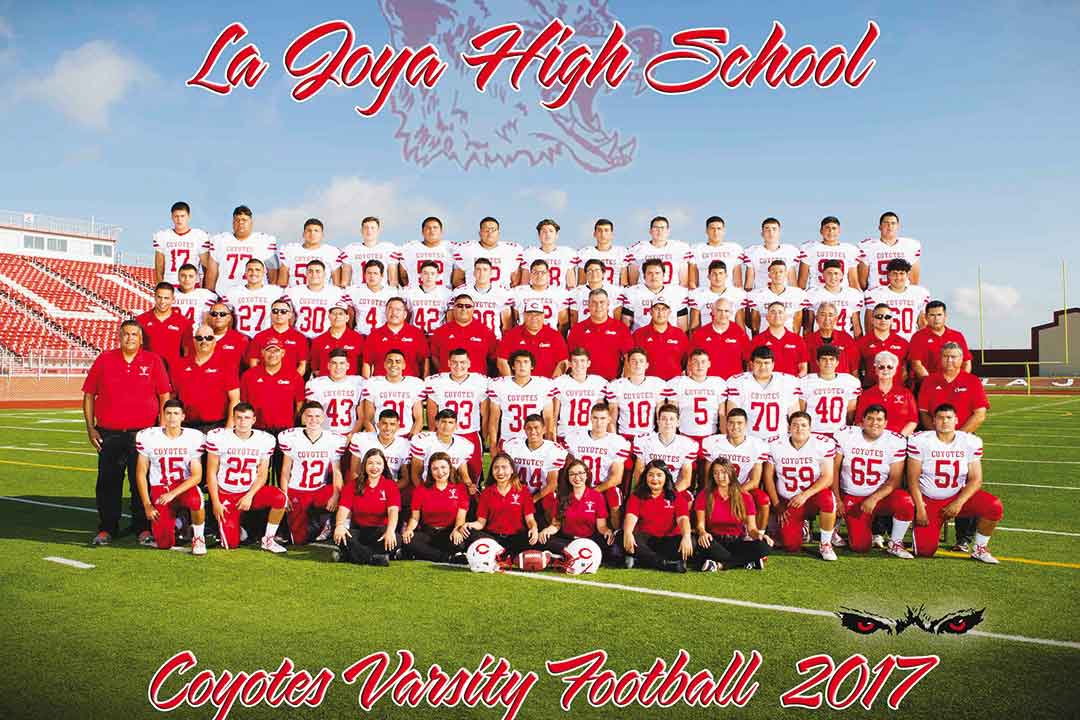 Coach Farias explained, “One thing that contributed to our four losses at the end of the season was a couple of injuries we suffered. However, it had more to do with our inability to finish games than anything else. We got ourselves into some situations, like we did against Juarez-Lincoln, where we were close in the first half, but then we’d have a big turnover in the second half, which would shift the momentum. A couple of turnovers cost us the Palmview game as well.”

One thing the 2017 Coyotes have going for them is experience at the quarterback position. Two-year starting quarterback Irving Garcia is returning for his senior year.

“I’ve seen him grow through the years,” said Farias. “That includes his maturity and his leadership, on and off the field. He’s a quiet and hard-working young man with a work ethic that is apparent to all the other players. If we can get a running game established, that will allow him to throw the ball better and give us a more balanced attack.”

For the most part, Farias will be depending on sophomore running back Eddie Villarreal to be his workhorse on the ground.

As for other key players the Coyotes will be counting on this year, Farias said, “We’re going to need returning letterman Danny Villarreal on the defensive line to come through for us this year. We’re also going to be needing Trey Perez to fill the void left by the graduation of middle linebacker Rey Hernandez who was like another coach on the field for us. In the secondary, we’re expecting returning letterman Irvin Zamora, one of our corners last year, to play at free safety this year. Offensively, we’ll be banking on linemen Alex Rodriguez, Damian Tanguma and Sam Aguayo to protect our quarterback and to create a surge on the line so that we’ll be able to run the ball better.”

Entering his third season as the Coyotes’ starting quarterback, Irving Garcia shared what he and his teammates have been doing to help them do what they couldn’t do last year – finish games.

“We’ve put ourselves through the toughest conditioning program by coming out in the hottest time of the day,” said the 6-foot-4, 205-pound quarterback. “We’ve also been going through fourth quarter situations in our practices to try to finish games better.”

When asked if he considers himself to be a pocket passer, a scrambler or a dual-threat quarterback, Garcia said, “I really haven’t put it up to the test but my sophomore year, when we were more of a passing team, I was more of a pocket passer. My coaches knew that I was young so they expected me to get the ball out and give my teammates a chance instead of keeping it to myself. Now that I have more experience, and I know what I’m up against, I know that I have the ability to get out there and try making things happen on my own.”

One of the defensive linemen the Coyotes will be counting on to put pressure on the opposing quarterbacks is senior nose tackle and defensive end Daniel Villarreal. Villarreal is one of only a select few current Coyotes players that were part of the 2014 team; the last La Joya High football team to make the playoffs. That was an experience he remembers well.

“My brother Yonny (Villarreal) was a starter on the 2014 team that made the playoffs,” the 5-foot-9, 195-pound senior shared. “He was a linebacker on that team. Our quarterback’s brother was also on that team, so we both have memories of the Coyotes in the playoffs and we both want to do whatever it takes to make this team the next one to make the playoffs.”

Sophomore running back Eddie Villarreal may be one of the youngest players on the team, but he’s been looking forward to the opportunity to run the ball on the varsity level for a long time.

“Ever since I was small, I’ve wanted to run the ball,” said the 5-foot-8, 200-pound back. “I’ve watched NFL players run the ball and score touchdowns and I’ve always loved being in the end zone. That is why I became a running back.”