Mission resident Shaine Casas went to the 2017 Speedo Junior Nationals with hopes of faring well as he faced off against some of the world’s top junior swimmers. He was ranked in the top 24 in each of the seven events he was scheduled to participate in and as high as sixth in at least one event.

At the end of the five-day event in East Meadows, N.Y., on Long Island that concluded Aug. 12, the rising senior at McAllen High School had placed in the top eight in each event, highlighted by a rare first-place tie in the 100-meter fly with a time of 53.24 seconds. 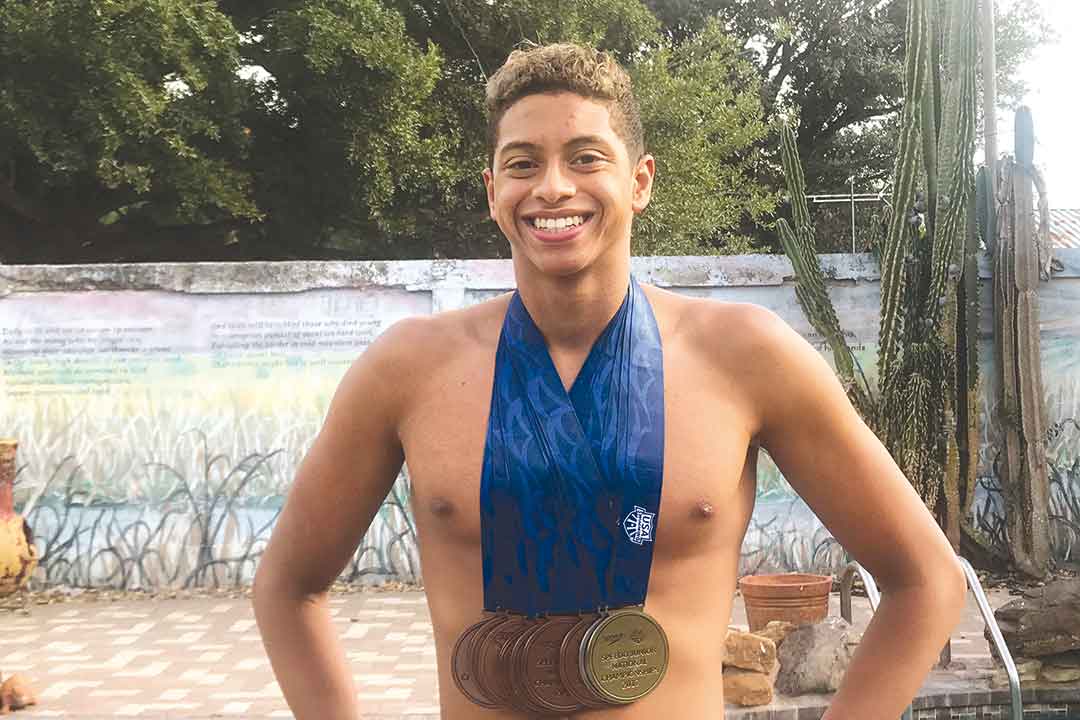 Mission resident Shaine Casas is pictured in his backyard after he placed in seven events, including a first place tie at the 2017 Speedo Junior Nationals swimming competition earlier this month. Courtesy photo

Unlike many sporting competitions across the country that self-proclaim to be a national championship and where there seems to be one in almost every state, this event is the best of the best. In fact, Casas tied in the 100-meter fly with Molodovan Olympian Alexei Sancov, who competed in the 200-meter freestyle in the 2016 Summer Olympics.

But being a champion is something that he has learned to deal with. There’s no arrogance or a sense of entitlement when Casas talks. There’s nothing but a feeling of gratitude for all the experiences – wins and non-wins, practices and workouts – in which he’s been able to participate.

“From my perspective, Shaine has always been grateful for everything he has done and accomplished and every chance he gets,” said Elliott McGill, his coach from Team Nitro, an Austin-area swim team that Casas competes with outside of school. “That’s the way he was as a 14-year-old swimmer at the time, excited to compete in the Texas state swim meet for his age group. You can see that eagerness and excitement he has to soak up every experience and that all found its climax during a great meet in New York.”

Casas said joining team Nitro, a nationally known swim team, launched him into another level. He said some of the things he was trying to do in the Valley that weren’t working, started working for him up there. He credits McGill for a burst of improvement. He was pleased that he did so well at the butterfly. His time was less than a half second away from Team USA’s final qualifying time for the 2016 Olympics.

“He probably would have qualified for 90 percent of the countries around the world with that time,” McGill said. “But you know what, we’ve never really talked long term. We talk about getting better each time out, to follow the process.”

That process includes three steps in McGill’s eyes. He said the first step is using the Junior Nationals as a springboard into his senior year and to keep improving and not find a lull that is common in competitive swimming. The second is to find the right college for Casas to excel and with the right coach; he currently has his choices narrowed to three colleges for upcoming visits – Texas A&M, Tennessee and Notre Dame. The third is to start looking at what could happen from college and moving forward.

“This event wasn’t my end. I hopefully have just as much or more to go through,” Casas said. “There’s always more that can always be done. But for now, this is good. I’m very happy.”

Casas said he also came back a little surprised with his performance in the butterfly. He admits that he usually works on and focuses on the backstroke, breaststroke and freestyle. Now, he said, he’s going to put in a few more repetitions with his butterfly, which happened to be his favorite event going in, but not necessarily his strongest. That may have changed dramatically.

“The butterfly is the greatest event ever,” Casas said. “It’s just so fast and so exciting. That’s the event I really enjoy watching, whether it’s a long course or a short course. It’s just great.”

McGill said it’s hard to not admit that the butterfly style has suddenly become Casas’ strongest event. He added that it may not stay the same as he gets stronger and is coached at the college level.

“One of the greatest things about Shaine is that he is so well balanced and so talented in all those different areas of swimming,” Casas said. “He still hasn’t found his top event though until he reaches that physical maturity he needs to get to where he’s competing against 20-something year olds.

“The thing is, when he gets to that point, the sky is the limit. He has an amazingly bright future ahead of him.”

It’s a future that – even though they don’t talk about it much – can lead to others one day saying they competed against an Olympian.