“I’ve been on this committee since 2005 so it’s been a long time since we’ve been talking about Mission High School and to finally see it almost completed it’s quite,” Stubbs paused holding back her emotions. “It makes me happy.” 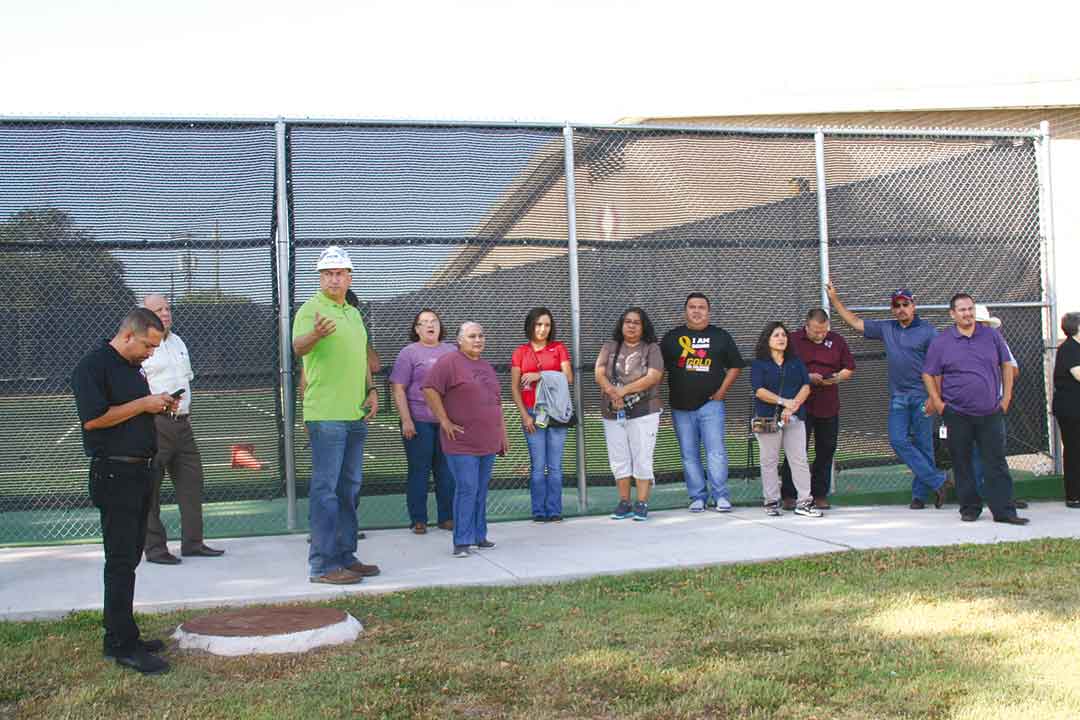 A member of the Mission Consolidated Independent School district’s Facilities/Environment Committee, Stubbs had just completed a three-hour walk through of three schools culminating with a tour of the $33 million Mission High School expansion first envisioned in a 2008 bond program.

The project includes a new main entryway with administrative offices, a two-story education building with 38 classrooms, a new fine arts and band facility, a new Agriculture Science building and a renovated building that will be a new Junior ROTC center with its own shooting range. The project includes a new 28,000 square foot cafeteria with seven serving lines replacing the old 18,270 square foot cafeteria.

For example, López noted that at 13,416 square feet, Veterans Memorial High School’s cafeteria is less that half the size of the Mission High School’s new cafeteria and with just two serving lines. López said the VMHS cafeteria is about the size of the new cafeteria at Mission Junior High School that opened last year where the student population is 900. He noted at Mission, the new cafeteria will be able to feed 1,200 students at a time meaning the school will only need two lunch periods as opposed to three at VMHS where nearly 2,100 students have enrolled for the coming school year, he said. By comparison, Mission High School’s enrollment is expected to be approximately 2,400 when classes start on Monday, López said.

“And the number one complaint from the school is that even with three lunch shifts, ‘My kid can’t even eat inside because there’s not enough room,’” López said, paraphrasing a parent’s lament, adding many students eat sitting on the floor due to a lack of space in the VMHS cafeteria.

Requiring three lunch shifts at VMHS increases the potential for problems such as fights and students skipping classes “which keeps teachers from their classrooms and administrators from their offices because they’re too busy monitoring students,” López  said.

López said the VMHS gym is also considered undersized for the typical high school noting it is comparable in size to Alton Junior High School’s gym.

Rick Rivera, assistant superintendent for operations, told committee members the VMHS gym has 14,674 square feet compared to Mission High School’s Neuhaus Gym with 21,510 square feet. Rivera said while the VMHS gym can hold a maximum 1,630, the Neuhaus gym has a capacity for 3,233.

“Mr. Garza can’t even hold a pep rally with his entire school because he has nowhere to sit 1,800 students,” López said of VMHS Principal Fidel Garza. “Veterans has never experienced that in its history. And that’s part of high school life.”    Making their way into a dimly lit VMHS library, Rivera noted it is less than half the size of the 14,913 square foot MHS library and about the size of an average junior high school library but with more than twice the student enrollment.

He said the VMHS library is smaller than Mission Collegiate High School that has only 400 students.

“So imagine trying to have multiple classes in here trying to use the library,” López said. “If you look they don’t even have a full media section. Libraries have media sections now days.”

López suggested erecting a new, larger gym and converting the old one into a larger, state of the art cafeteria could solve the problem.

Rivera explained part of the problem stems from the fact VMHS was originally constructed to be a ninth grade school with just 900 students feeding to MHS from MJHS and K. White Junior High but with plans to one day expand the school.

“When I talk to people they say that was always the vision to make this a new high school,” López said. “Well when they built it they did not build it for a high school.”

López said expanding with new buildings is a problem because the campus is squeezed onto just 40 acres of land, the average size campus for a junior high school. López said ideally today’s modern high school sits on 100 acres and a minimum of 60 acres, which is the size of the MHS campus. And that was accomplished by annexing private property through eminent domain, López said.

“So we may have to do that for Veterans,” López said. “Buy  land and work with the city on the streets because we still have a parking issue and where are we going to put the new gym?”

López said one solution that has been suggested is to convert VMHS into a junior high school and then erect a new high school on a larger campus. Lopez said the average cost of a new high school is about $80 million but said a $100 million high school is not uncommon. He said in Seguin, a suburb north of San Antonio, the school district took out a $100 million bond to finance a high school that eventually cost $108 million, requiring the school district to dip into its general fund to make up the difference. López said Sharyland’s Pioneer High School was built for $60 million.

López said there is still land available next to VMHS that could be purchased for future expansion.

“But we would have to act fast before it’s sold,” he said.

At Mission Junior High School López brought the committee outside to overlook the school’s 14 acre campus where he said it would be impossible to construct baseball or softball fields and barely large enough to construct an undersized track. López said Cantu, Alton and K. White Junior High Schools are all built on 40 acres.

López said the only way to increase the campus’ size would be to remove area residents from their homes using eminent domain.

“And I can tell you we’re not going down that road,” López said.

Standing on a sidewalk under an awning between buildings López pointed out the difficulties administrators have monitoring students during lunch periods and between classes when students have access to the school yard because the school is not enclosed under one roof.

“We just don’t have enough staff to monitor them,” López said. “That’s why I like Alton and K. White, they’re enclosed. You know where the kids are at.”

López said one suggestion has been to turn Mission Junior High School, which was the original Mission High School, into an alternative school and build a new junior high school on a 40 acre site.

“There’s a lot of options we want to look at here,” López said. “You could put your police department there. We could put a lot of stuff there.”

López said the purpose of the site tour was to inform the committee members of the district’s needs in preparation for selling the projects to the public who must approve the bonds that will pay for them. He noted the school district has not raised taxes to pay for the bonds passed in 2006 and 2008 and lowered taxes twice after refinancing the bonds at lower interest rates. Lopez said he anticipates the district will have a full needs assessment ready to present to the full board of trustees and ultimately the public by next May or June. He said until then he has no idea how much the district will ask voters to approve.

“We’re just getting started. Today was just a snap shot,” López said. “But all that money from the 2008 bond that’s all coming to a close, that’s done. So we’re going to have a needs assessment. And because we’re not going to be asking for a $400 million bond we want to be very strategic about what we build.”