All across the Valley in nearly every community the picture was the same, stacks of bottled water and dry goods accumulating on pallets for transport north to hurricane victims.

Mission resident Stephanie E. Casas was among the many area residents who were dropping off items Monday at one of two donation sites set up by the City of Mission earlier this week to help victims of Hurricane Harvey. 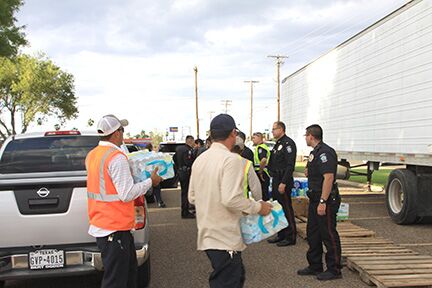 Mission city employees unload cases of bottled water from the back of a pickup truck donated by a local resident at a collection point in front of the city’s Parks & Recreation Department headquarters on Bryan Road Monday afternoon. Progress Times photo by Joe Hinton

Mission City Manager Martin Garza said during Monday’s city council meeting that in addition to providing two commercial freight trailers to transport donated items for hurricane victims, the city had also deployed five firefighters to assist in disaster efforts. Garza said the donated items would be transported once the trailers were filled. He said three firefighters would be assisting with water rescues and two others would provide emergency medical services. Garza said the city would also be providing building inspectors to the Houston area to ensure homes are safe before displaced residents return to their homes.

Casas, 30, a juvenile corrections officer, said her aunt’s home on Houston’s southeast side was under water forcing her aunt to stay with relatives in another part of town that wasn’t flooded.

“She’s fine,” Casas said of her aunt. “But I’ve been watching the news and seeing grown men crying because they’ve lost everything is heartbreaking.”

Casas said donating canned foods and cases of water was the least she could do to help out the victims. She said she has wanted to donate cash but wasn’t sure how.

Danella Hughes, executive director of the Harlingen-based American Red Cross of South Texas, said cash donations can be made by accessing the Red Cross’ website at www.RedCross.org. And she said automatic $10 donations can be made by texting Harvey at 90999. Doing so will result in a prompt to check a box that will add $10 to the monthly phone bill that will be donated to the Red Cross’ Harvey relief fund.

Hughes said donations of food, water and clothing can also be dropped off at any H-E-B grocery store. She said the Red Cross has been shipping three tractor-trailer loads of donated items from the Valley north twice a day since Aug. 25.

Hughes said the Red Cross is being inundated with offers of help.

“It’s a warm feeling to have so many Valley residents and so many people from South Texas coming together and wanting to help our fellow Texans up in the Coastal Bend and Houston area,” Hughes said. “We have schools wanting to do drives, people wanting to make individual donations. I’m reaching out to businesses to see if any of them want to match some of these donations just because I know we’re going to need so much help and support in the upcoming weeks we’re going to need every dollar we can collect.”

The Salvation Army is providing food trucks and shelters in the affected areas. At the Salvation Army store at 1600 N. 23rd St., in McAllen, a staff member said only food donations are being accepted for the store’s food pantry. The staff member at the store said persons wishing to donate cash to the organization can do so via its website: www.helpsalvationarmy.org or by texting “storm” at 51555 to donate via cell phone. The staff member, who declined to provide their name, said the pantry has had some requests for food from storm evacuees.

“But we’re hesitant to make a full fledged public request for food donations because we’re not sure how extensive this influx will be,” she said.

The Red Cross’ Hughes said it is unlikely the Rio Grande Valley will experience a great influx of evacuees from the north given that Houston is six hours from the Valley and the Red Cross and other entities have established numerous shelters in and around Houston, Corpus Christi and other affected areas.

Mission’s city manager said the three firefighters sent to assist with water rescues left Saturday for the Fort Bend County Fairgrounds in Rosenberg, Texas. He said they were being assigned to Texas Task Force One and would be deployed to various agencies on an as-needed basis. He said the two other firefighters left Sunday assigned to the Emergency Medical Task Force and were being assigned to a mobile hospital in a tent “where basically they’re going to be taking vital stats and helping people who need any sort of assistance.” As of Wednesday they were helping staff a temporary medical facility at Houston’s NRG Stadium, according to Mission’s Emergency Management Coordinator James Cardoza.

On Tuesday afternoon at the city’s second drop off site in the parking lot of North Town shopping center, Mission Police Officer Veronica Longoria, vice president of the Mission Police Association and Mission Fire Fighter, Robert Lopez, president of the Mission Fire Fighter’s Association, were overseeing operations in front of Movie Night, a vintage movie rental store where owner Homer Garza said he planned to entertain residents with music and free hot dogs as they dropped off donated items Wednesday from 5 p.m. to 10 p.m.

“It’s heartening to see the public’s support with all these donations,” Garza said, gesturing to the wooden pallets loaded with cases of water, dry goods and pet foods.

In Palmview and La Joya the La Joya Area Federal Credit Union was accepting donations all week at its offices at 316 S. Bentsen Palm Drive in Palmview and 214 Exp. 83 in La Joya. Donations were also being received at Peñitas City Hall, at 1111 S. Main Street, and after 5 p.m. at the city’s fire department. The Texans Helping Texans Disaster Relief program was requesting paper goods, cleaning supplies, snack foods, beverages, socks and undergarments, baby items, non-perishable food items and new, unwrapped blankets.  Volunteers will be traveling to the affected areas this weekend, September 2 and 3 to deliver the collected items.

Donations to the program could also be made via www.youcaring.com/hurricaneharveyvictims-916270.

The City of Peñitas collected items until 9 a.m. Thursday and at 10 shipped the goods north in a tractor trailer provided by Fox Packaging.

Employees of Mission’s Ranch House Burgers restaurant traveled Tuesday to McCampbell-Porter Airport in Aransas Pass as the city, located north of Corpus Christi, was also devastated by the storm. Workers fed first responders in the area and the restaurant planned to return today to give out donated goods, said owner Michael Barrera.

Barrera said as of Monday his Mission and Weslaco restaurants had each received about $5,000 worth of donated items ranging from water, clothes, toiletries and canned goods as it participated in Operation Texas Strong where several businesses across the Valley were accepting donated items.

“We’d like to go on a later trip to Houston but currently all the roads to get there are flooded so we’re going to have to wait for that,” Barrera said Monday. “People are coming in with donations who are happy to help out and we’ve had a few people come in here from Corpus staying in the Valley who do not know the conditions of their home. They’re very appreciative of what’s going on. It’s sad the storm happened but look at how everyone is coming together to help.”

Among the local residents who donated goods were Esmeralda Cardenas and her husband, Armando. The Palmview couple dropped off clothes at Ranch House Burgers on Bryan Road in Mission saying they planned to drop a few cases of water at the Mission donation site in front of the Parks and Recreation Department.

“For us, this is all we can do, we wish we could do more,” Esmeralda said. “I was horrified when I saw the news of Harvey because I remember thinking how the storm could’ve hit us. Can you imagine that destruction in the Valley if the storm had not changed course? I am helping out because I know I’d want people to help me if we were attempting to rebuild after the storm.”