Consistency is key to success and the Palmview Lobos have found that over the past three seasons, qualifying for the playoffs each year in that span.

Third-year Head Coach MargaritoRequenezhas proven the Lobos belong with top competition in District 30-6A, but after losing a strong 2016 graduating class, Palmview is looking to rebuild this new team into a consistent contender. 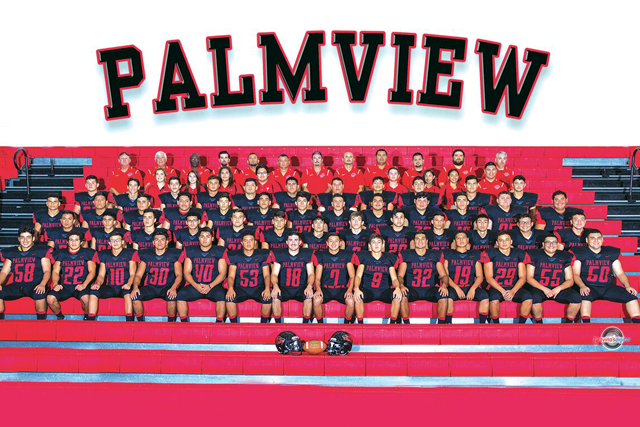 “We’re trying to learn how to play together, it’s a brand new team,” Requenez said. “I lost a very good senior crop and I’m hoping these new ones can step into the role very quickly. It’s exciting; this is what we’ve been waiting for and practicing for, getting ready for since the spring. We’re looking for a successful year this year.”

While the Lobos 2016 campaign ended in bi-district playoff loss to United South, the experience gained by Palmview’s seven returning starters in the past three seasons has been critical to the program’s success. They will be depended on to grow the program and hopefully keep the postseason appearances alive at Palmview High School.

One of Palmview’s most vocal leaders is senior cornerback Jesse Herrera, who was a First Team All-District selection a year ago. His field awareness and vocal leadership from the secondary provides a key component for the Lobo defense.

Also returning on the defensive side of the ball for Palmview is defensive end Rolando Andrade and linebacker Mike De Hoyos. Andrade, who was voted the 30-6A Defensive Newcomer of the Year in 2016, brings a forceful presence on the defense’s frontline by consistently disrupting opposing backfields.

On the opposite side of the ball, Palmview lost three First Team All-District selections at quarterback, receiver and slot back, in addition to the loss of the 30-6A District MVP in Joel Piña.

Returning to hold down the Palmview offense is the right side of the offensive line in seniors Roberta Barba and Moises Morales.

Morales was named the 30-6A Offensive Newcomer of the Year a season ago for his ability to create room from his right tackle position. Now, he will be looking to make space for a group of skill players, including first-year starting quarterback Amador De Leon and running back Jacob Piña.

“We’re trying to execute better this year,” Morales said. “We’re just trying to get blocks to open up the holes for the running backs and protect the quarterback. I want other teams to see us as strong, big and dangerous.”

De Leon will be under center for the Lobos after two years away from the program. The first-year starter is hoping to help his team keep the Palmview playoff streak alive.

“Just looking to contribute any way I can,” De Leon said. “I just want to see what the team has going into the season and hopefully we can make the playoffs.”

Eric Vasquez will step in to fill the shoes of pass catchers TristenMyende and Mark Salinas, while Pina looks to bring the same running tenacity his brother brought to the Lobos.

Last season, the Lobos opened the season with three straight losses against Roma, Economedes and Edinburg High before winning five of their next seven games to finish 5-5 on the regular season. Palmview’s 4-2 district record earned the Lobos a second-place finish in 30-6A.

Requenez is hoping this year’s team can put together some wins early to set the tone for the rest of the season.

“Last year we started off kind of slow before we put stuff together, but I’m hoping to avoid that, get a couple wins early and set the tone,” the third-year head coach said. “It’s really good to have a couple of starters back, they kind of set the tone for the rest of the season and if these youngsters can buy-in to our philosophy then we’re looking for a very good, successful season.””

As for the rest of the Palmview football team? They’re ready to go out and show the Valley what the new look Lobos have in store.

“Everybody’s excited; everybody’s ready to strap on their helmet and show Roma what we got,” Herrera said.

The Lobos open up the 2017 regular season with non-district action against the Roma Gladiators 7:30 p.m. tonight at La Joya Football Stadium.