Cheers and applause from an overflow crowd at Mission’s City Hall followed a unanimous vote by the city council Monday passing a resolution calling on President Donald Trump to abandon plans to build additional border walls along the U.S. border with Mexico.

Aware that many of the attendees to Monday afternoon’s council meeting were there because of the resolution, Mayor Norberto “Beto” Salinas jumped several other agenda items to get right to it. City Secretary Anna Carrillo read the resolution aloud prior to its passage. 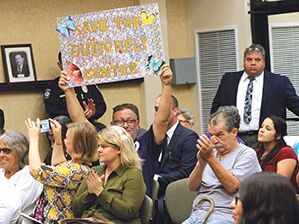 Audience members at Monday’s Mission City Council meeting show their approval after a unanimous vote on a resolution against additional border walls on the U.S. border with Mexico. Progress Times photo by Joe Hinton

The resolution begins identifying iconic local attractions that could be adversely impacted by additional border fencing in the area such as La Lomita Chapel, the city’s namesake, the National Butterfly Center, the World Birding Center Headquarters and Bentsen Rio Grande Valley State Park, which are characterized in the resolution as “essential attractions to maintain our revenue from ecotourism as well as providing local families with quality places for wholesome recreation and enjoyment.”

The resolution also acknowledges the economic impact of Winter Texans on the local economy, expressing the concern of city officials “with limited to no access to these main attractions, it will significantly change our ability to successfully recruit and retain this group of seasonal visitors that are an important component to the economic health of the community.”

The resolution notes that Mission and Hidalgo County are among the safest communities in the U.S. “and additional border infrastructure would do nothing to improve the effectiveness of deterrence, security, or any other justification used for the construction of the wall, and would instead negatively impact the local economy by detracting hundreds of thousands of yearly visitors to the aforementioned attractions.”

Besides the deleterious environmental impact to the ecosystem by cutting off natural water flows of the Rio Grande River and disturbing wildlife migration routes, the resolution also expresses concern over the wall’s $25 billion cost  “supported by an import tariff or ‘Border Tax’ on Mexican goods imported to the U.S. or U.S. goods entering Mexico resulting in a ‘trade war’ which leads to market instability in terms of job creation, economic development, substantial increases in the costs of goods passed to consumers, and a negative cultural impact.”

The resolution concludes stating the Mission City Council is opposed to any new border walls, fences or levees and “denounces” any federal funding for a wall.

“Let it be further resolved, that the City Council urges the President of the United States of America, and the United States Congress, to reconsider the use of taxpayer money for border infrastructure, and instead utilize the allocated resources to provide more cost effective methods of enforcing immigration policies, such as technology and additional personnel, which would create jobs and stimulate the region, as opposed to the negative effects associated with the wall.”

Monday’s vote by Mission’s city council was in part initiated by a group of citizen activists who two weeks ago presented to the mayor and council their own resolution asking it be placed on Monday’s agenda for approval. Instead Mayor Salinas asked City Manager Martin Garza to draft the city’s own resolution.

Mission resident, Melinda Melo, who organized the citizen’s effort said she was more than satisfied with the resolution passed Monday.

“It was everything we’d hoped for and more,” she said.