When Hilaria Fernandez first heard the news that President Donald J. Trump ordered an end to the federal program that protects her daughter from deportation, she instantly felt heartbreak.

Fernandez spoke of her daughter, who she declined to name, during an informal meeting Tuesday at the San Juan office of the immigration advocacy group, La Union del Pueblo Entero. Fernandez’s daughter, she said, has been a recipient of the Deferred Action for Childhood Arrivals program since its inception in 2012.

The program has until now, protected Fernandez’s daughter, as well as nearly 800,000 undocumented immigrant youth who came to the United States when they were children, from deportation. According to the University of California at Berkeley’s Undocumented Student Program, DACA gave young undocumented immigrants protection from deportation and a work permit. The program expires after two years and is subject to renewal. 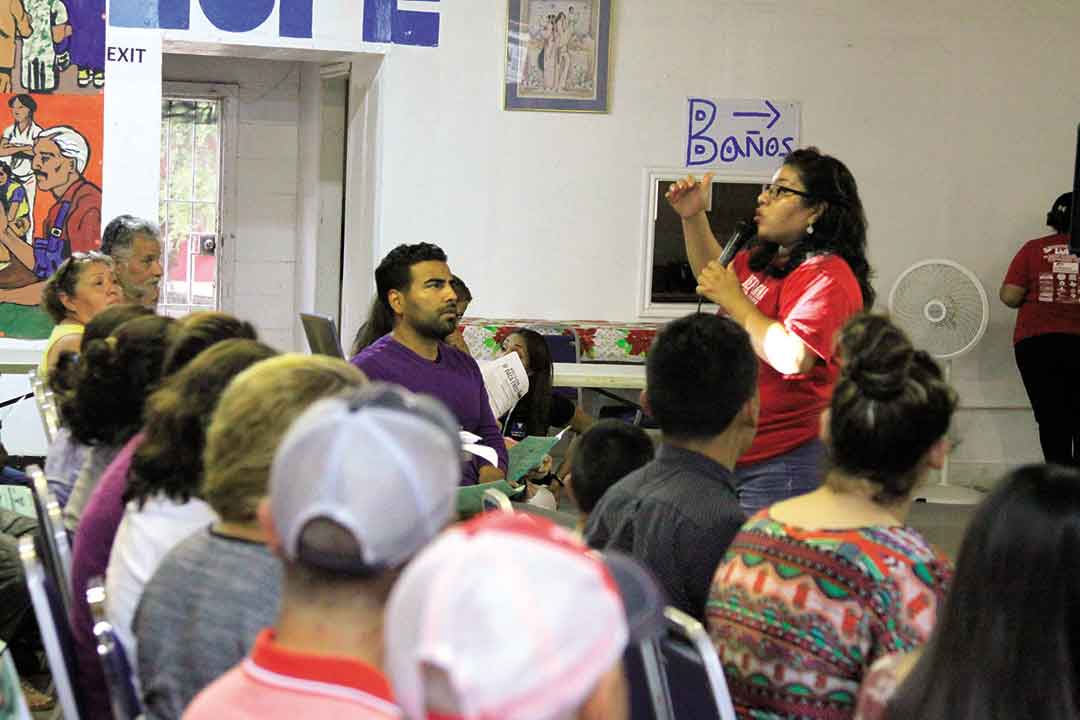 To qualify, recipients had to be students or high school graduates with no felony convictions, the website states. DACA recipients were also ineligible for benefits such as Medicaid, food stamps and supplemental security income.

On Tuesday, U.S. Attorney General Jeff Sessions said the program will end in six months. During a press conference, Sessions referred to DACA as unconstitutional and argued that the program “denied jobs to hundreds of thousands of Americans by allowing those same jobs to go to illegal aliens.”

“We are a people of compassion and we are a people of law. But there is nothing compassionate about the failure to enforce immigration laws,” Sessions said. “The compassionate thing is to end the lawlessness, enforce our laws, and, if Congress chooses to make changes to those laws, to do so through the process set forth by our Founders in a way that advances the interest of the nation.”

According to a White House statement, the announcement Tuesday will not impact current DACA recipients until after March 15, 2018, six months from now. No new DACA initial applications will be accepted beginning Tuesday, but current DACA permits are still valid until they expire.

“This news was shocking, like getting a bucket of cold water on your face,” Fernandez said. “I can’t help but think ‘what will happen to all the kids, many of whom are in DACA and go to school or are working?’ They have a future and now that dream is being cut short. I feel so blessed my daughter is eligible for renewal this coming January, but knowing that the program is ending makes one feel too powerless to do anything.”

The deferred action program has helped hundreds of thousands of immigrant youth positively transform their lives, as reported in a 2016 nationwide survey by United We Dream, the Center for American Progress, and the National Immigration Law Center.

According to an article from the CNBC website published Tuesday, Trump’s decision to remove all DACA recipients from the workforce could cost the economy more than $400 billion over the next 10 years.

The decision to scrap the program will also leave the nearly 1 million DACA recipients potentially more vulnerable to deportation after having already voluntarily provided their personal information as a program prerequisite.

Those already enrolled in DACA remain covered until their permits expire. If their permits expire before March, 5, 2018, they are eligible to renew them for another two years as long as they apply by Oct. 5. But the program isn’t accepting new applications.

Fernandez was one of nearly 60 people who attended the Tuesday meeting at LUPE’s office which served as a question and answer session where the public could find out more information on DACA and whether or not they were eligible for a renewal.

“When we first heard of DACA we were so happy,” Fernandez said. “I told her, ‘you need to apply mija. You’re a college graduate with a future, protect that future.’ If she and other recipients lose those benefits from working, I can’t even imagine what she’ll experience.”

The decision to end DACA has received criticism from State Senator Juan “Chuy” Hinojosa who in a statement said this decision was cruel.

“This is not who we are as a country. We are not about hate or people ready to kick out young adults who were brought to this country as innocent children,” he said. “To end DACA is also shortsighted and works against America’s future growth and success. DREAMers make us more competitive as a nation and as a state by fostering economic growth, developing new ideas, and bettering our society. They are not eligible for welfare or any government benefits, yet DREAMers pay over $2 billion in state and local taxes each year.”

Vanessa Centene and her friends also attended the LUPE meeting. The 23 year old has a steady job as a sales clerk at a phone repair store and worries she may be renewing for the program for the last time.

“We get to have a lot of opportunities with this program that helps us find different jobs, apply for licenses and state ID’s, things we wouldn’t have if we were undocumented,” Centene said. “I am reapplying to DACA next month and will spend more than $700 in application fees and on lawyer’s fees to assist me in the application so I know I’m taking this seriously. We were sad when we received the news on the end of the program but we’re not going to stop working, we’re going to continue being here.”

“We have a lot of work to do,” she said. “If DACA does end, all the kids will go back to the shadows. They’re not going to want to leave the country, they’re going to want to continue working but now they won’t be contributing to the economy since they’re getting paid under the table. They contributed to exist, now they practically won’t be doing that. These kids deserve the chance to exist in this country as regular citizens.”