Despite that materials for the Tom Landry Hall of Fame Stadium have been stuck in Houston due to Hurricane Harvey, the project’s architect said he’s still hopeful the $8 million project will be completed by Sept. 15, two weeks after the contractual completion date.

That was the message project architect, Eli Alvarado, brought to the Mission Consolidated Independent School Board Facilities/Environment Committee Wednesday night during its monthly meeting. 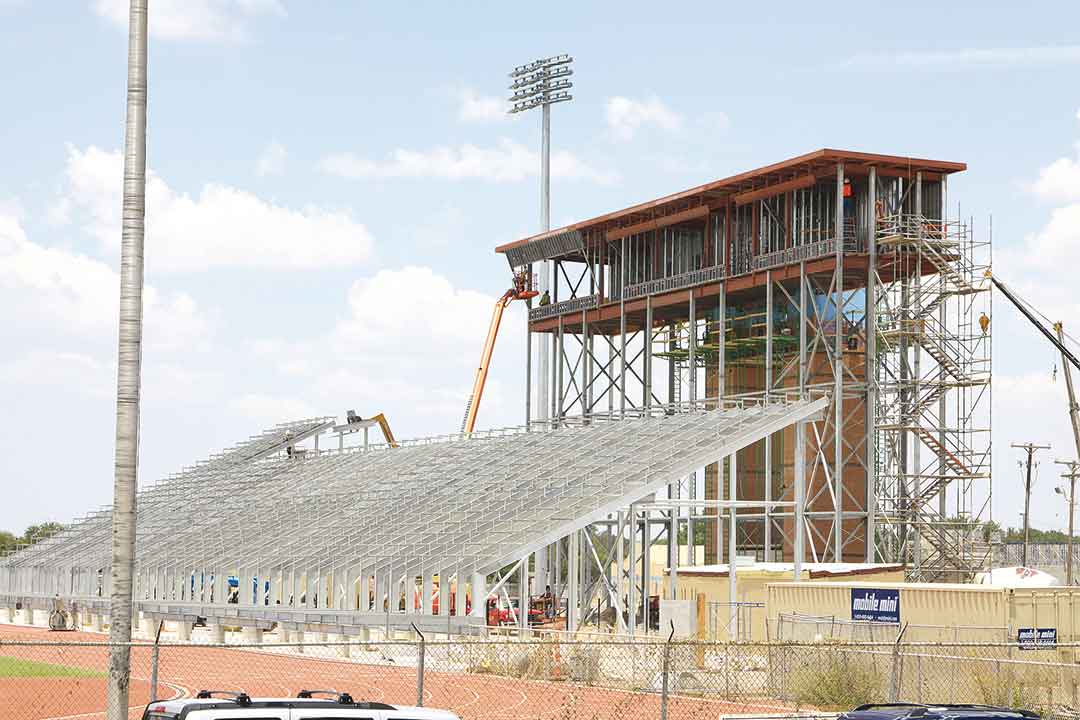 Alvarado’s comment followed his report that the stadium’s press box elevator, glass windows and metal wall panels remained in Houston because of Hurricane Harvey along with the stadium’s signs and parts of the seating chair backs for the reserved seating area on the home side of the stadium.

Alvarado said the elevator was not scheduled to have been delivered until today anyway, and that once delivered it will take about ten days for the manufacturer to assemble the elevator on site.

“Everything is sitting there we just haven’t had it delivered to us so once we get it we can start installing everything,” Alvarado said.

Michael Montalvo, project manager for Holchemont Ltd. Construction company,  said the press box windows need to be in place and the air conditioning functioning to remove the humidity before the press box flooring and ceiling can be installed.

“The good news is we think they’re going to be delivered here early next week so we can start working on everything and we are pushing for the fifteenth, believe it or not,” Alvarado said.

Mission CISD Superintendent Dr. Ricardo Lopez expressed skepticism the elevators would be ready by Sept. 15 given that they must pass state inspection before they can be used. But he made light of the delays saying Mission football teams are like rock stars on a world tour.

“The kids will play anywhere, they don’t care where they play. They want to play,” Lopez said.

“We’re strong. We can do it. It’s OK,” said Board Trustee Petra B. Ramirez

Lopez said last week’s opening game between VMHS and Harlingen High School’s Cardinals had a robust turnout despite being played out of town.

Alvarado said the stadium’s new lights were to be connected to electricity yesterday that would enable teams and bands to begin practicing on the playing field thereafter. But Rick Rivera, assistant superintendent for operations, said that won’t happen until the city’s fire marshal and building inspector gives their clearance to use the field.

Rivera said administrative staff were recommending to the board that it grant an additional seven delay days to Holchemont for delays caused by boring and trenching that was necessary to accommodate a new stadium public address system that delayed the completion by the contractual completion date. Trustees had previously awarded the company five contractual delay days due to rain and because construction was halted due to student testing days last fall.  The board is expected to vote on the matter at its regular monthly meeting on Wednesday Sept. 13. The company will be fined $1,500 a day for every day the stadium is not completed after its contractual completion date.

“Believe me no one wants to complete this more than we do as well,” Alvarado said. “We understand that puts you all in a bind but we don’t have control of the weather.”